Tentative plan has practices beginning in August; can be pushed back to October 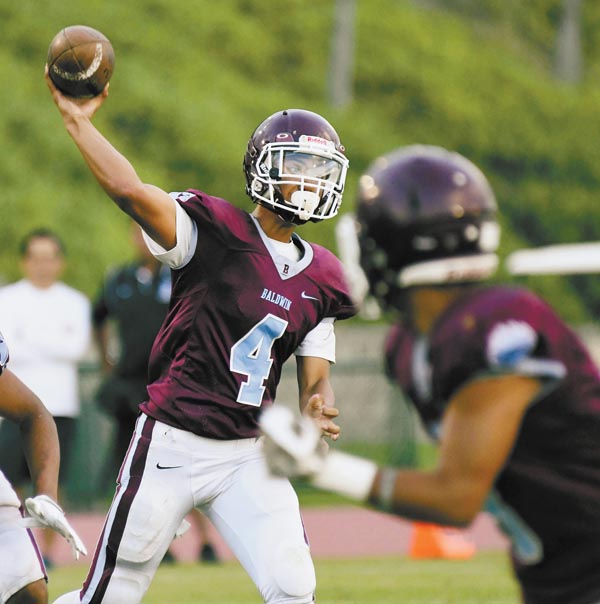 Baldwin High School quarterback Laa Asuega-Stark will be back for his senior season in the fall. The HHSAA announced plans Monday for football practice to begin on Aug. 17. The Maui News / MATTHEW THAYER photo

Football practice for Hawaii high schools will be allowed to begin on Aug. 17 — about a month later than normal — under a tentative plan approved by a Hawaii High School Athletic Association committee on Monday.

Traditionally, five heat acclimation days and 10 practices are required before games can start for football, meaning that games would begin the weekend of Sept. 4-5 under this plan. Things have been moved back due to the coronavirus pandemic.

Time on the calendar for contingency needs were also part of the plan.

“Basically, all the leagues agreed that they like three seasons, 11 weeks, they all agreed that we could start the fall on August 31st, football would try to start on August 17th,” HHSAA executive director Chris Chun said. “That, at an 11-week season, would take us having our spring state championships around April 18th.” 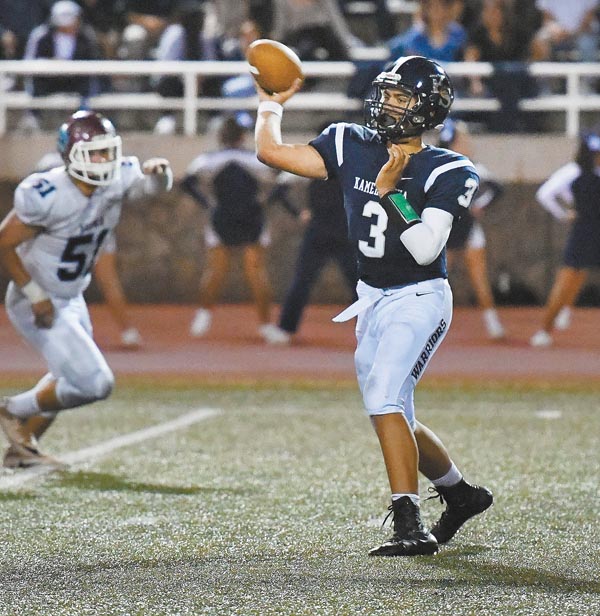 Kamehameha Maui quarterback Alex Tolentino will be back for his senior season in the fall. The HHSAA announced plans Monday for football practice to begin on Aug. 17. The Maui News / MATTHEW THAYER photo

There is plenty of wiggle room in the plan, which has football games starting about a month later than they have started the last few years.

“That would give us three seasons at 10, 11 weeks each including the state tournaments.”

Chun conceded that if the Oct. 19 drop-dead date for fall sports comes into play, things would most likely be in jeopardy.

“If something happens and we can’t start by October 19th then we’re going to have to come up with a different plan,” he said. “But it won’t look like a traditional (calendar) with three distinct seasons, it would be something different.”

“We’re going to do our best with venues and stuff, we’re going to try and keep the dates held, so we’re not going to let venues affect our ability to hold a state tournament,” Chun said. “We’re just going to try to work whatever we can in that time period, but the contingency plans until then are to run three seasons.”

Chun had earlier set a goal of having the tentative start dates in place by the end of May, but the committee beat that deadline by a couple weeks.

“Everything has been running pretty smoothly in terms of getting leagues to agree on certain stuff,” Chun said. “Hopefully we can use these (tentative) start dates and begin before October because it means our state is doing well.”

Chun said that all of the plans are contingent on governmental and Department of Education approval. Even the most optimistic dates for sports starting are about a month later than usual.

“We wanted to make sure that all the schools were open, or actually were scheduled to be open by the time we start,” Chun said.

“They all like that start date, they all pretty much agreed on that start date and that they want three seasons,” Chun said. “It starts to diverge after. If we start to hit mid-October and we can’t start, we might have to focus on league play or something like that.

“But if we can’t start until mid-October anyway, I was telling the leagues ‘that means something’s going on in our state,’ so we should just be concerned about how to keep the students safe. It might mean no state tournaments, it might mean just league championships. We would try to figure out how to get the seasons done nonetheless.”

Baldwin High School quarterback Laa Asuega-Stark will be back for his senior season in the fall. The HHSAA announced plans Monday for football practice to begin on Aug. 17. The Maui News / MATTHEW THAYER photo

Kamehameha Maui quarterback Alex Tolentino will be back for his senior season in the fall. The HHSAA announced plans Monday for football practice to begin on Aug. 17. The Maui News / MATTHEW THAYER photo