Kaulana Tihada has grown up with a front-row seat to watch his older brother Joshua star on the football field.

Neither of Joshua Tihada’s brothers were surprised when told that their middle sibling is The Maui News MIL Boy Athlete of the Year for the 2019-20 academic year.

Josh Tihada is 5-foot-10 and 195 pounds of quick-twitch muscle with a soft-spoken voice off the football field. 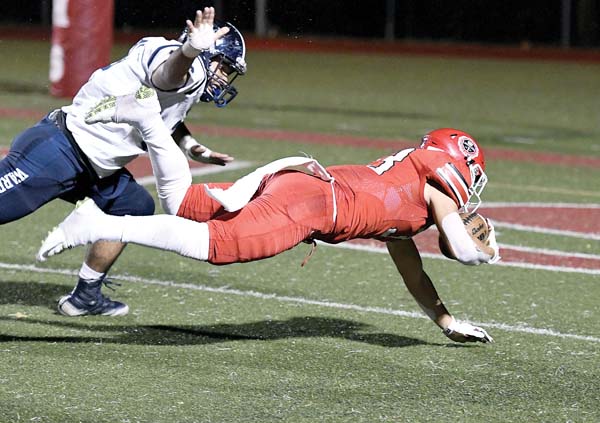 “Definitely just blessed,” Josh Tihada said. “Just so thankful for everyone that has gotten me to this area and specific place and position that I’m in. I’m just so thankful for my parents and everyone around me for making me better — it’s just a huge blessing and a huge honor.”

Josh Tihada left for the University of Nevada-Las Vegas last week with his mom Sheri along to help him settle in — he will be an invited walk-on this fall for the Runnin’ Rebels.

The notice of this honor was to be shared with the family, and Josh was certain that it would be special when he imagined the moment.

“The conversation will be full or happiness and joy, they are just going to be so happy for me,” Josh Tihada said. “It is definitely just going to be a great moment for us because we’ve all done things for each other, they have always helped me, prepared me to be a better human being and a better person in general. So, they’ll just be super proud of me and I’m just so thankful for them always having my back and supporting me through all the good times.”

Kaulana often attends Lunas’ practices with his father Joey Tihada — the youngest Tihada estimates that he missed only two of Josh’s games in four seasons for the Red Tide from the West Side. 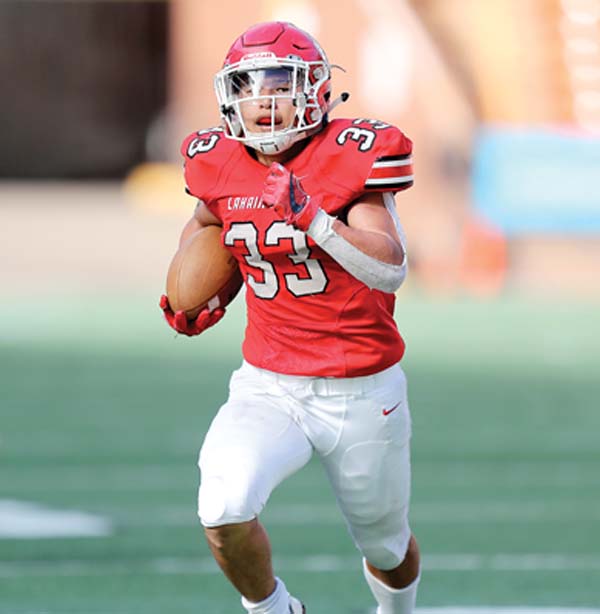 Lahainaluna’s Joshua Tihada breaks free for one of his three touchdown runs during the Lunas’ 21-10 win over Kapaa in the state Division II championship game on Nov. 29 at Aloha Stadium. ANDREW LEE photo

“It helps me a lot, it really, like, motivates me,” Kaulana Tihada said. “I want to be better than him when I’m older. I want to be myself, trying to be the best I can be.”

Kaulana will try to replace the talks with his big brother about Lunas’ games by making his own noise on the field.

“We talked a lot — after games, before games, even during the week,” Kaulana said. “I learned a lot from him, probably most of my football knowledge. It gives me a lot of confidence because my brother broke a lot of records, four state championships.”

Indeed, Joshua Tihada capped his impressive career with a state tournament-record 310 yards rushing in the Lunas’ 21-10 win over Kapaa for their fourth straight Division II state title in November. He scored more touchdowns in Hawaii state tournament history than anyone else with 19 in his career — he broke the previous record of 12 as a junior.

Josh capped his career with a game plan that is rarely seen played out by the share-the-ball-happy Lunas. He carried the ball a career-high 36 times — out of Lahainaluna’s 51 total plays in the state final — and accounted for all but 29 of the Lunas’ yards from scrimmage.

“I was, like, ‘Damn, he’s pretty good,’ “ Kaulana said of watching the final game of Josh’s career from the Aloha Stadium sideline.

“I just tell Kaulana, ‘Be patient, your time will come,’ “ Josh Tihada said. “People live and learn from their mistakes, just be ready to try new things. Be prepared to make mistakes and learn from it. I just tell him to endure and be OK with making mistakes sometimes because that is what will make you better.”

Lahainaluna fans can look forward to Kaulana on the roster soon.

“Only God can tell how good he will be, but I think my brother will be a good athlete, a good, hard-working athlete, good person in the community,” Josh said. “He is definitely someone you want to be around, so I hope my brother can just be the best he can in any way possible. Not just in sports, but even in school if that’s his pathway — whatever he wants to enjoy in life.

“I don’t want to just throw football on him because he can do ultimately whatever he wants to do.”

Josh Tihada scored an MIL-record 67 touchdowns in his career, including an MIL single season-record 17 in eight league games in 2019.

He was named Division II state player of the year and later state boy athlete of the year by scoringlive.com, and was named to the Hawaii High School Athletic Association Hall of Honor. He rushed for an MIL-record 2,417 yards in four MIL seasons and 1,087 yards in nine state tournament games in his career, another record.

Justice Tihada, a rising senior at the University of Oregon, carried the ball a team-high 60 times in 2016 when he was the Lunas’ second-leading rusher with 331 yards in eight MIL games. Elijah Ragudo led that Lahainaluna team with 393 yards rushing on 46 carries.

To put in perspective how Josh Tihada finished his Lunas football career, he had 63 carries for 472 yards in two state tournament games as a senior. During his four MIL regular seasons, he carried the ball 19 times as a freshman, but then the reliance on him grew as he toted it 87 times as a sophomore, 112 times as a junior and 145 as a senior.

“I am beyond proud,” Justice Tihada said of his younger brother. “I don’t think I can say any words that can describe who he is other than to say that he is probably the best running back from Lahainaluna and probably, might be, (the best) from Maui according to all the accolades that he accomplished.

“I’m proud of him. I’m proud that he always kept the same work ethic and he always held people accountable when I left. I just always tried to do my best to set a good example for him. I’m super proud of him — I don’t know what else to say.”

Justice knew for a long time that Josh had the Tihada football family gene. Second cousin Garret Tihada and great uncle Lanny Tihada are both former head coaches for the Lunas and are still on the staff.

“The moment I knew he was something special was when in 6th grade when Big Boys (football) has just started for Lahaina and he was the smallest kid, he was literally the smallest one, but he was the only one calling out the plays on defense — everyone else was quiet,” Justice Tihada said. “I remember Coach (Bobby) Watson specifically, he would choose Josh over the 7th- and 8th-graders just because he knew that Josh had football smarts.

“I always felt that out of all the sports that Josh played, he focused more on football. That was his calling and you could tell at such a young age. He already had football smarts of a person that was already in high school.”

As is his way, Josh Tihada threw a lot of the credit to his older brother.

“I honestly learned a lot of football from him,” Josh said. “We’ve been playing Pop Warner since keiki days. He’s just been a huge role model to me and a huge leader. When I was a freshman, he was a senior so I definitely looked up to him as a captain and as a big brother. He just led the way for us in general. He has definitely impacted my football career and made me into the person I am.”

The brotherly bond has gone beyond the football field.

“I have definitely learned so many life skills from him,” Josh said. “He was the first. … He definitely taught us so many things in general, how to be humble, being patient and how to work as hard as you can.”

MIL Boy Athletes of the Year