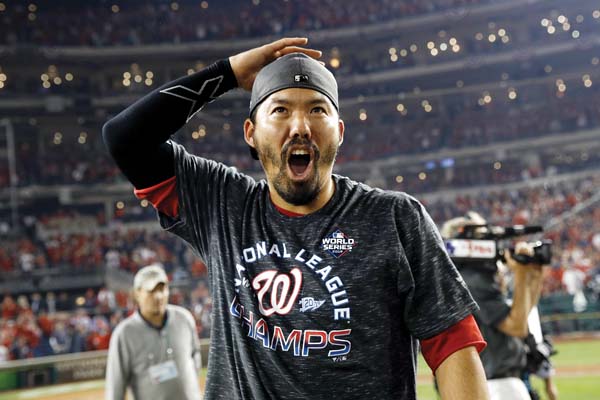 Nationals catcher Kurt Suzuki celebrates after Washington closed out St. Louis in the NL Championship Series on Oct. 15. The Maui native and the Nats were 27-33 through 60 games last season. They finished 93-69 to claim a wild card and eventually the World Series title. AP photo

WASHINGTON — Maybe this gives fans a sense of what it will mean to have a Major League Baseball season shrunk down to just 60 games this year during the pandemic: Where were the Washington Nationals that far into 2019?

Last year, the Nationals played their 60th of 162 games on June 4 — and came back to beat the visiting Chicago White Sox 9-5 in an interleague matchup to “improve” their record to 27-33.

Doesn’t look much like the mark of a soon-to-be World Series champion.

At that point in the year, Washington’s .450 winning percentage left it much, much closer to the bottom of the standings than the top: fourth in the five-team NL East and 13th in the 15-club National League, not nearly good enough to get into the postseason, even one as expanded as the 16 total participants proposed (but not yet agreed-to) for 2020.

In a sport that prides itself on weeding out pretenders and confirming contenders over the long haul, they were hardly the only ones whose season would have looked a lot different if this year’s setup were used last year. This is what emerged Tuesday in an attempt to play amid the coronavirus pandemic: 60 games starting July 23 or 24 in empty ballparks with rules changes such as using the DH everywhere and starting extra innings with a runner on second base.

For better or for worse.

After 60 games in 2019, the Chicago Cubs were 34-26, leading the NL Central and second overall in the league; the Philadelphia Phillies were 33-27, atop the NL East and fourth in the league. Both sank to the middle of the pack and missed the playoffs.

Over in the AL, the Texas Rangers started 32-28, good enough to be in position for a wild-card berth. But they wound up under .500 and out of the postseason.

For the 2019 Nationals, Game No. 60 served as a microcosm of the season and an example of the “Stay in the fight” mindset instilled by manager Dave Martinez.

More than four months before he would earn World Series MVP honors, Stephen Strasburg fell behind 4-0 in the first inning against the White Sox, 5-0 in the second. But the Nationals overcame that deficit behind five RBIs from free-agent-to-be Anthony Rendon.

“I definitely got punched in the face in the first,” Strasburg said at Nationals Park that day. “There’s only one thing you can do, and I think that’s what we preach as an organization, (and) that’s: Never give up and keep battling.”

By then, the Nationals were in the early stages of constructing a turnaround from the low point of 19-31 through 50 games, a rut that had some calling for Martinez to be fired and players to be traded.

Through 60 games, were they better? Yes.

Were things still bleak? Without a doubt.

But Washington completed a 9-2 stretch with another win against Chicago — 6-4, thanks to Trea Turner’s walkoff two-run homer in the ninth — in Game 61 the next day. The Nationals were on their way to ending up 93-69 for a wild-card spot they converted into the franchise’s first championship.