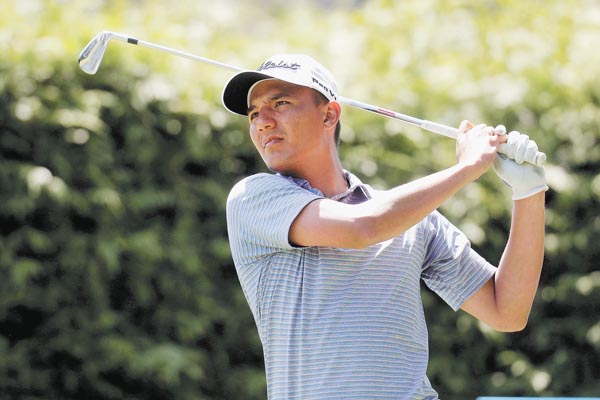 Alex Chiarella heads into his fourth round of competitive golf at the Korn Ferry Tour’s King & Bear Classic in St. Augustine, Fla. He is tied for 118th, at even-par 72. CHUCK RUSSEL file photo

Alex Chiarella has work to do and he is happy for that.

Today, the Seabury Hall graduate heads into his fourth round of competitive golf in the last three months at the Korn Ferry Tour’s King & Bear Classic at World Golf Village in St. Augustine, Fla. He is tied for 118th, at even-par 72.

He said he is comfortable and feels safe in the Korn Ferry Tour’s plan to play tournaments without fans, due to the coronavirus pandemic.

“I feel really safe, even flying on a plane was easier than I expected,” Chiarella said. “You had to wear a mask the whole time, but at least on my flight they kept all middle seats open, so you’re not sitting next to anybody. Pretty much once I rented my car, I’m going straight to the grocery store, my Airbnb, a few places here and there, but I feel safe.

“They have made a good game plan with sanitizing everything at the golf course and practice social distancing, and not letting anybody else on the property. I’d say they have it under control, for sure.”

Chiarella did chuckle about playing in front of no fans.

“It makes me feel like I’m playing a mini-tour event, based on no crowds,” he said. “I don’t see a major difference in having no crowds, I just don’t.”

He missed the cut last week after rounds of 74 and 72 at the Korn Ferry Challenge at TPC Sawgrass. He said the layout with narrow fairways didn’t really fit his game well, but he knows he must improve after venturing away from his Southern California home for the first time since March.

“I didn’t play that poorly, I definitely felt rusty,” he said. “I felt like I hadn’t played a tournament in three months, which I hadn’t. And a lot of these guys out here have been playing in tournaments in Arizona and Florida and places that haven’t been taking it as serious as California where I have been. So, I might be slightly unprepared at the moment, but I’m sure the rust will leave.”

He currently stands in 57th place on the Korn Ferry Tour points list, but he knows he needs to solidify his position going forward.

“Golf games turn around, so I’m excited to get back in the routine of things and playing some good golf,” he said.

Chiarella said the protocols have been stringent.

“Before we can even step foot on property we needed to get COVID tested at a clinic near the golf course,” Chiarella said. “It took roughly 12 hours to get our results back. It was a nasal, I don’t know what they call it, but the one that goes way down your nose.

“It’s pretty brutal, I’m not going to lie. They shove a long Q-tip down your nostril — they had to do it in both my nostrils because one of mine was clogged, so I got to do it twice.”

Chiarella added, “Once you get to the course, they take the temperatures of every player, caddie, tournament official, anybody really from the tour who is going to be on-site. And they do that really before you pull into the parking lot. If you’re under 100 degrees, or whatever the threshold is, you’ll be allowed on the property.”

Once on the course, social distancing is mandatory, food is served in to-go containers, and golfers sit at their own tables.

“No handshakes, no fist bumps, a little socially awkward, for sure,” Chiarella said. “You can’t go give your good buddies a hug when you see them like you want to, that was definitely weird.”

Punahou graduate P.J. Samiere is Chiarella’s caddie and traveling partner. The two met as juniors in Hawaii and cemented their friendship while Chiarella played at the University of San Diego and Samiere at San Diego State. They bonded more as travel partners on the Mackenzie Tour last year.

The trip between the first two events for the Korn Ferry Tour’s return was just a short drive down the road. They will get on a charter jet to Frampton, Utah, for the Utah Championship next week.

“They’re letting players and caddies on the charter, but we have to do a mouth swab COVID test prior to getting on the plane,” Chiarella said. “I guess those results we will get back within the hour.”

There are host hotels for all of the events and Chiarella said “it’s highly recommended that players and caddies stay there, so they can sort of keep everyone in a bubble, but P.J. and I are staying at a two-bedroom Airbnb. We’re both negative, we’re avoiding going to restaurants and sitting down. So, we’ll go to the grocery store with a mask on and get some groceries and cook.”

Alex Chiarella heads into his fourth round of competitive golf at the Korn Ferry Tour’s King & Bear Classic in St. Augustine, Fla. He is tied for 118th, at even-par 72. CHUCK RUSSEL file photo

King Kekaulike High School’s Teani Arakawa (2) was named Hawaii State Player of the Year by Gatorade on Wednesday. She returns for her senior year in the fall. The Maui News / MATTHEW THAYER photo