1978 graduate working to lead Catholic school program back to prominence 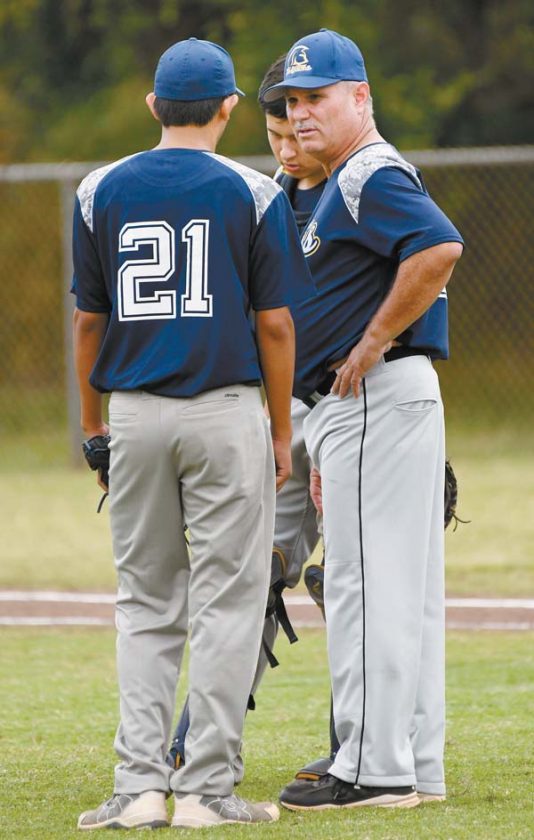 The St. Anthony High School baseball team has not been to a state tournament in a decade, but Lionel Montalvo is doing his best to return the program from the tiny Catholic school on Lower Main Street back to prominence.

Montalvo was part of a remarkable run for the Trojans from 2007-10 as an assistant coach under Shane Dudoit. That Hoosiers-like era began with an outright Maui Interscholastic League title in the final season before Division II existed, continued with an appearance in the first D-II state final and was followed with two more final four berths.

For the last five years, Montalvo has brought his vast athletic resume back to the Trojans as head baseball coach as his son Luke is set to enter his senior year in the fall.

“It was always the kids,” Montalvo said of his most vivid memories. “We’ve always had good, wholesome kids. Here and there, a couple knuckleheads, but it’s good that they get involved in sports and that we’re able to get them some values and teach them to set their goals through athletics in general, not just at St. Anthony, but sports in general.

“We’ve been able to produce some fine young men for the community.”

The Trojans were on the verge of competitiveness going into the 2020 season, which was scrubbed due to the coronavirus pandemic.

“When I first started this last stint at St. Anthony, the first thing I had to do was get the kids to believe in what they’re doing,” Montalvo said. “They were kind of set in their ways and ‘Why do we have to change?’ But then you say, ‘What you were doing wasn’t working, so let’s reevaluate, let’s change.’ This past year, it’s really a shame that we didn’t get to play because I thought that we would have been really competitive as opposed to in the past.

“We put our best foot forward, but we still had a lot to learn at the varsity level.”

Jahns was the overall MIL Player of the Year as a junior in 2007 and was the hard-luck loser on the mound in a 1-0 decision to Kauai as a senior in the 2008 D-II state championship game. He went on to a stellar career at Northwestern University and is currently a baseball instructor for the Glenview Youth Baseball academy and a volunteer assistant coach at the University of Chicago.

“He’s a proud alumni, all the time that he spent with us, he was 100 percent there,” Jahns said of Montalvo. “He was focused on the team, he was focused on the kids and he was passing on Coach Dudoit’s message. That coaching staff my junior and senior year, that coaching staff was everything for that team. We had no seniors my junior year and we still managed to win a championship that year and I feel like our coaches are … I mean, I want to say they’re the sole purpose because they were able to wrangle us together, they were able to get us to work as a unit.

“Practices were hard and games were fun and easy with those guys.”

Jahns smiles when he thinks back to his St. Anthony days with Montalvo on the staff.

“I played football at St. Anthony and to go in and play Baldwin, you knew the score was going to be 70-0, but to go into baseball season and compete with them — I think we won our opener against Baldwin (in 2007) — to go out and compete with schools like that, everyone on the team was so proud to be St. Anthony, so proud to be St. Anthony grads after that,” Jahns said. “I still talk to that 2007, 2008 team. Aaron Uyehara, the catcher those years, is still one of my best friends and he is going to be in my wedding coming up soon.”

Montalvo, 60, graduated from St. Anthony in 1978, but his coaching journey has seen him coach football and baseball at Lahainaluna and King Kekaulike as well. He is a veteran baseball umpire and currently one of the top football referees in the MIL.

He met his wife Karen, who works for the Maui County prosecutor’s office, during his six years as a police officer before he jumped to the Maui County Fire Department in 1991 — he retired as MFD deputy chief in 2018. The couple also has a daughter, Mindy, who is a rising junior at the University of Hawaii.

Montalvo met Dudoit while both were in the MFD recruitment class — they first coached together at Lahainaluna in the 1990s.

Dudoit is overjoyed to see Montalvo back grinding away for the Trojans as the school’s enrollment numbers have dipped sharply over the last decade.

“It says a lot for Lionel and his love for the game of baseball,” Dudoit said. “St. Anthony is not what it was years ago with the decrease in enrollment and basically Lionel going back there and trying to be, not necessarily the savior, but somebody who has got the experience — he can really help these kids both baseball-wise and in life.”

One of the top baseball minds in the state currently, Dudoit has nothing but respect for the task that Montalvo is now undertaking at St. Anthony.

“It’s a tough task that very few could take on and I think Lionel is one of those guys that can do it and do it for the love of the sport,” Dudoit said.

Montalvo said that the current Trojans are fully aware that two-time World Series champion Shane Victorino is a 1999 graduate of St. Anthony.

“We talk about it a lot,” Montalvo said. “(Baldwin grad) Kurt Suzuki also, the attitude that he comes in with and the what he gives back, it’s always appreciative. Maui in general, it’s a small place and what (Suzuki and Victorino) have been able to accomplish with very little on their plate and what they had to make up for with their work ethic and their attitude, we keep reminding our players of that. … Shane Victorino, Kurt Suzuki, these guys that come back and give back to the kids — the kids buy in and they believe and that’s a lot.”

Montalvo relishes his current role with the Trojans.

“It just makes it more fun when everything comes together and you end up winning.”

Disappointed in obituaries when compared with paper