Coach Speak is a special series of stories highlighting coaches from around the Maui Interscholastic League. Stories will be run periodically throughout the summer in The Maui News. 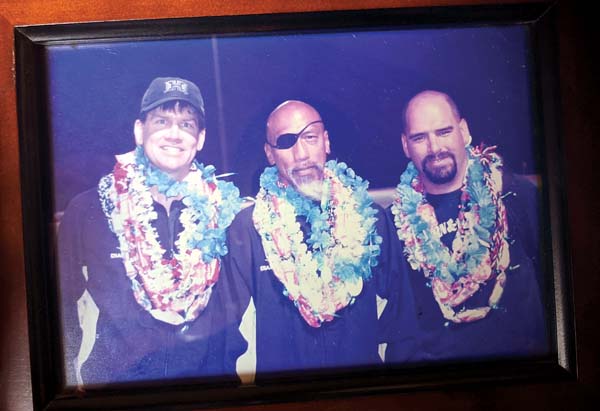 From coaching growing players in youth soccer clubs to high school athletes on the Pukalani campus, Dancil has a long history of building communities that are willing to support one another on and off the field.

“Being with this coaching staff has been very rewarding,” assistant coach Ken Hayo said last month via phone. “Being with Gundi, I’ve learned many things and he’s humbled me in a lot of ways. He shares a lot of Hawaiian history, which I appreciate, over the years, too. All in all, I just think he’s a great man.”

Dancil, who has served as Na Alii’s girls head soccer coach since the school was first established in 1995, humbly declined from being in the spotlight for the Coach Speak series. He said that he’s just fortunate to work alongside veteran coaches like Hayo and David Makua, who have been by his side for two decades.

“I have always said that the success to our program is to surround yourself with the best people that you know, who will selflessly commit themselves to the school,” Dancil said in a text earlier this month.

While all coaches have played a significant role in the King Kekaulike girls soccer program, all were quick to credit Dancil and the group as whole, including assistant coach Sara Matsumoto and alumni players who come back to help the team.

“He’s a very warm, generous and giving person,” Hayo said. “The time he gives for the school with helping improve things, helping with parking, he’s always there when needed, so I took a lot of that from him, and I think he’s helped me become a better person because of that, and I think the school is lucky to have somebody like him with his level of commitment.”

Ronnie Kihara, King Kekaulike’s girls junior varsity coach and student activities coordinator, has known Dancil since 1999. Earlier this month, she also spoke of his humbleness as a leader in the soccer community.

PK Higa, current Na Alii athletic director and former football coach, said that Dancil is an “integral part of the athletic department and we’re very appreciative to have somebody like that.”

“The girls soccer program has been a staple to the King Kekaulike athletics program because of the character of these people, of our coaches, because of the relationships they have and the impact they have on our kids,” Higa said. “Not just on the field, but off as well.”

For Dancil and the coaches, it’s also important that the team focuses on academics in addition to being punctual to practice and class-skills they can carry into everyday life.

“There’s a lot of things we hold them accountable to,” Hayo said. “Not just being a soccer team, but you know, doing our part to help them transition from youth to adults.”

Higa said that Dancil has “built a legacy here on Maui” over the years by getting involved with the Hawaii Youth Soccer Association, the Maui Cup youth soccer tournament, HHSAA soccer championships and coaching for the Maui Strikers Soccer Club.

Dancil is also an athletic events coordinator for King Kekaulike on top of his head coaching duties.

“Coach Gundi has been a tremendous staple in the soccer community for decades,” Higa said. “Not just here on Maui, but statewide.”

Makua and Hayo joined Dancil at King Kekaulike when soccer was still growing as a sport on the island. Prior to moving to Maui in 1986, Hayo played professional soccer with the New York Greek Americans and coached at his old high school.

On the Valley Isle, he coached youth soccer and volunteered with teams that his kids played on. Hayo then coached alongside Bill King at Maui High for 10 years before joining Na Alii in 2000.

Coincidentally, Makua played goalkeeper for the Sabers during Hayo’s first years with the team.

“It’s a good coaching staff, we all get along, and we’ve had a lot of great teams that have come through as well,” Hayo said.

In the trio’s two decades together, this past season might’ve been the most exciting when the King Kekaulike girls came one win short of a state championship, falling to Kamehameha Kapalama 1-0 in a title game nail-biter. It was Na Alii’s first appearance in the state championship match.

Under Dancil, Na Alii have also won the MIL title the past three years in a row, another first in program history.

Hayo said that he is ready to see what the next season holds, and Higa said that the girls soccer program looks forward to its 26th year with Dancil.

“Every year you get different levels of talent,” Hayo said. “I don’t think it’s a 20-year progression, I think it’s, as Gundi and I always joke, we play the hand you’re dealt because you never know who’s coming to the program, who got hurt in the summer, who transferred schools, so we just show up the first day of practice and see who’s there, and then we start the process.”