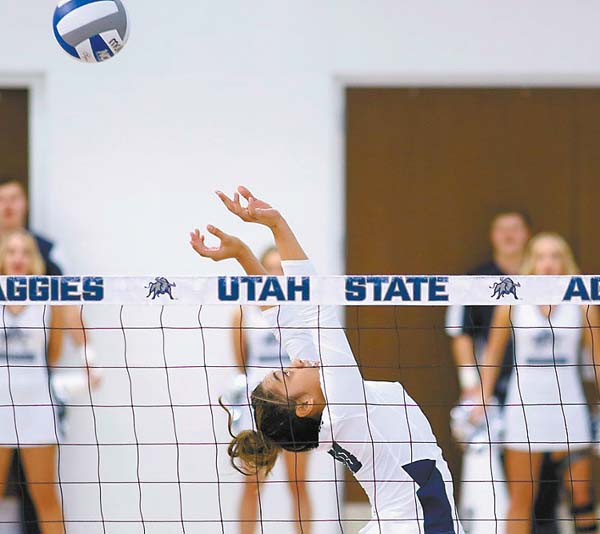 While details are still up in the air for all of them as their fall seasons rapidly approach, Maui’s indoor women’s college volleyball players are preparing full speed ahead.

Kalena Vaivai, the 2016 Maui Interscholastic League Division I Player of the Year for King Kekaulike High School, is preparing for her sophomore season at Utah State University.

The 5-foot-10 setter played in 23 matches last season and was second on the team in assists, but she will be under the tutelage of a new coaching staff head by Rob Neilson after the Aggies were 2-28 in 2019.

“I mean, it is tough to really narrow things down to figure out what’s going to happen,” Vaivai said last week. “But with my team and our new coaching staff there’s been constant communication. Even though we can’t be together physically, we have things we do together as a team mentally.”

Zoom meetings have been the norm this spring due the coronavirus pandemic, making it even harder to get to know the new coaching staff. 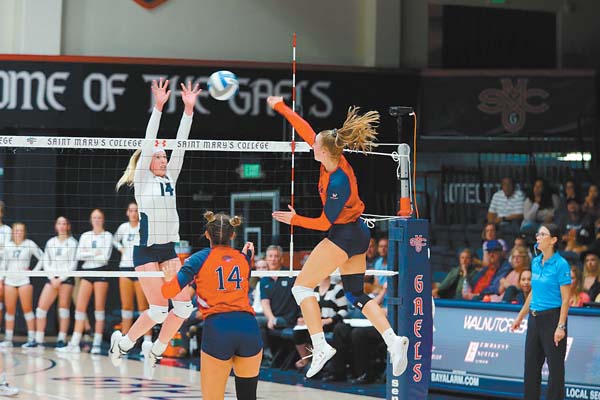 Chandler Cowell (right), a King Kekaulike graduate, is a standout on the beach and indoors for Saint Mary's College. Tod Fierner photo

“I mean, it sucks because we don’t know when the campus will open, we don’t know if we’ll have a volleyball season,” Vaivai said. “But we don’t want to think the worst of it, so we’re just mentally preparing ourselves for the game and hopefully when the time comes we’re back in the gym, we’ll be on the grind again.”

The other two current Mauians playing women’s volleyball at a four-year school are Chandler Cowell at Saint Mary’s College in Moraga, Calif., and Talia Leauanae at Alaska Anchorage.

Cowell, who also plays beach volleyball for the Gaels, is entering her sophomore season of eligibility indoors after redshirting as a freshman and seeing limited time on the court last year.

The King Kekaulike graduate recently returned to California after two months home on Maui. The Gaels coaching staff has reminded the team to be fully prepared for the season.

“All that we know is that when it happens we better be ready,” Cowell said. “I mean, we’re all doing the work out of season, just keeping our bodies ready, staying healthy, doing what we can during this time of uncertainty, but I’m excited to go back. I’m glad to be back in California because for me it’s easier to train here.” 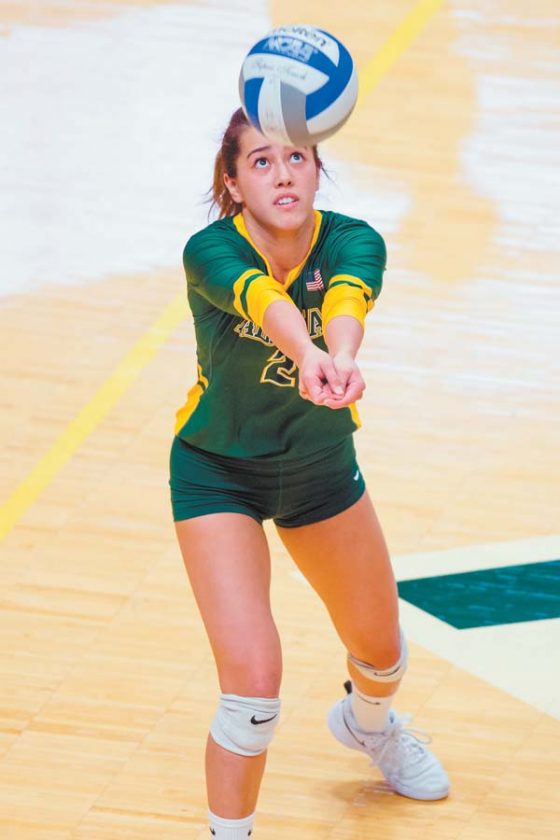 Cowell has been able to FaceTime and work out with teammates and is thankful for the opportunity while the pandemic has forced several schools to drop sports due to financial concerns.

“Saint Mary’s, right now, I’m happy that I have an amazing coaching staff that has been really involved with us and has made us feel heard and loved and supported during this time,” Cowell said. “I can’t really ask for anything else because they’ve done an amazing job of helping us out during this time. Other than that, just doing what we can with what we have and making the most of it.”

Leauanae is a rising junior libero out of Kamehameha Maui who led the Seawolves with an average of 3.68 digs per set last season, when they were 23-7 and advanced to the second round of the NCAA Division II tournament.

She recently left Maui and was enjoying summer vacation with her boyfriend by skydiving and rock climbing in Arizona. She earned all-conference academic recognition last season with a 3.38 grade-point average.

Like Vaivai and Cowell, she is waiting for word on what will happen in the fall.

“Me and my team, we have a Zoom call every two weeks and my coach just called us last week,” Leauanae said. “He couldn’t really update us on much. He just said he’ll keep us posted. As of right now, though, we’re preparing for having a season in the fall like normal, but there’s rumor that it could be moved to maybe spring or maybe just fewer games — I’m not sure.”

The adventures she has been enjoying in Arizona have helped relieve some of the stress of the COVID-19 situation.

“Just doing a bunch of different things that I’ve never done before this summer,” she said. “Just staying on top of workouts and touching volleyballs.”

Vaivai said her team had four weeks in the gym with the new coaching staff before the campus was shut down in March. She is expected to challenge for the starting setter spot for the Aggies in the fall.

“Honestly, they’re amazing,” Vaivai said. “Coach Rob comes from USA men’s volleyball, the national team. He is the most intelligent person that I feel would be in that spot. Being a setter, too, I’m so excited. He’s worked with BYU men, the national team, he’s worked with (national team setter and Kamehameha Kapalama graduate) Micah Christenson, all these incredible people. So, for us to have him, it’s cool because he’s smart, he knows what he’s doing, I get to learn new things. He really likes the people from Hawaii.

“For me, I think that having him is going to change our program for the better.”