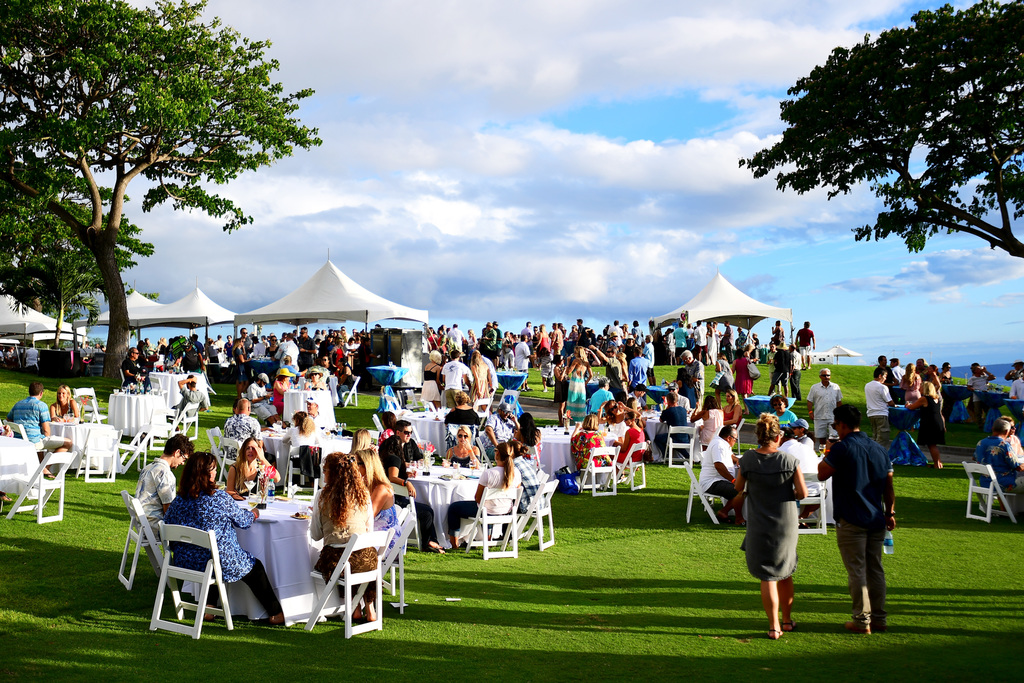 Like cool summer breezes, the three gala “Taste” parties of the 19th annual Maui Film Festival at Wailea will waft in with enticing aromas, sips, bites, sights and sounds –stealing the show as usual.

Launching the film fest as the opening party, the Taste of Summer will be at Grand Wailea, A Waldorf Astoria Resort. Pegged a star-studded “feastival,” it will be a casual affair on the Beach House Lawn from 5 to 7 p.m. Wednesday with sunset views, powerful music, gourmet bites, celeb sightings and more. Other culinary events and films will run through June 17.

“We have a great opening night this year,” says Barry Rivers, festival founder and director. “The two films are ‘Find Your Voice’ and ‘Stay Human.’ If the film festival is about anything, it’s these two things.”

Those who attend Taste of Summer on Wednesday along with Taste of Chocolate on June 15 and Taste of Wailea on June 16 have access to the double feature screening those nights at Celestial Cinema.“”At Taste of Summer, Grand Wailea Executive Chef Ryan Urig will again create many of the most mouthwatering tastes of the season, accompanied by the deeply powerful music of Ah Tim,” Rivers adds. 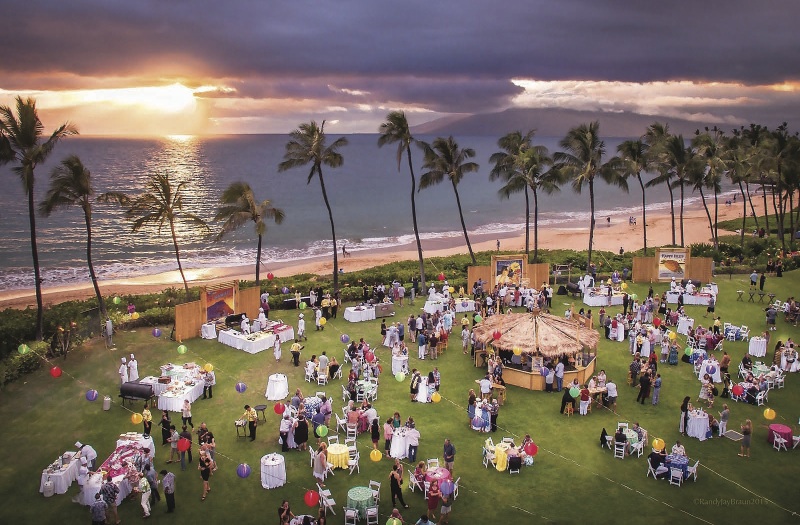 The Taste of Chocolate on June 15; • Maui Film Festival photo

“We will set up the event on the beachside lawns and kick off summer and Maui Film Festival,” says Chef Urig. “Everyone gets excited about this event! We’ll have a raw bar set up in an actual canoe and chefs grilling local tako, hanger steaks and Hawaiian fish.”

Adding to the light and savory repast will be heirloom tomato pizzas topped with Surfing Goat Dairy cheese, basil pesto and Maui olive oil; and grilled peaches with burrata cheese and arugula salad.

“Desserts will be created by our new Executive Pastry Chef Fabrice Benezit, who will finish off the menu with summertime desserts like funnel cake, grilled peaches and pies,” says Urig. “We hope locals will come out for some great food and great times.”

Do note that all parties are for those 21 and older, and that Pau Maui Vodka, Stella Artois beer and a selection of wines will be the libations du jour.

Next up is Taste of Chocolate on June 12 at Four Seasons Resort Maui. As aficionados know, chocolate is a sensual, sweet and known mood enhancer, so love will be circulating in the air. 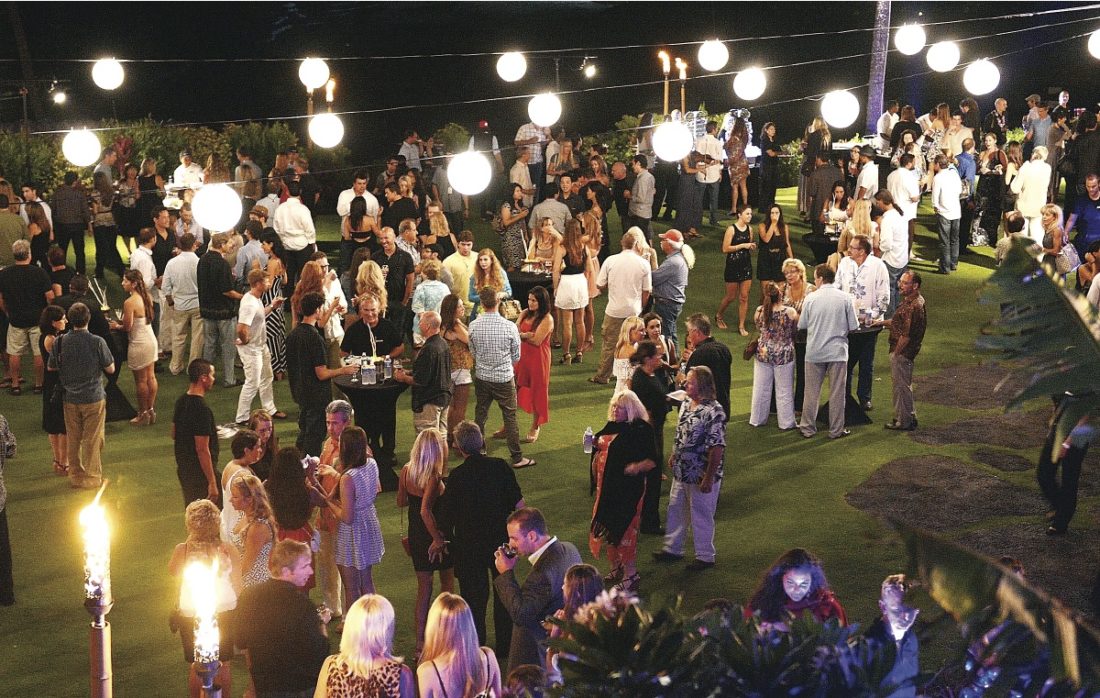 The Taste of Wailea on June 16; • Maui Film Festival photo

“How can you improve on perfection?” asks Rivers. “By raising the bar on an already amazing event and having the luxury of ‘the-sky’s-the-limit’ expression of your culinary creativity.”

Put another way, Four Seasons Maui Pastry Chef Bruce Trouyet will partner with Guittard to impress with new masterpieces as festival attendees mingle on the Ocean Lawn and listen to mellow tunes filling the plumeria-scented air of the starry night.

“Taste of Chocolate is fun,” says Four Seasons Resort Maui Executive Chef Craig Dryhurst. “It’s everything to do with chocolate, like an extravaganza from savory to sweet. It’s a very see-and-be-seen party and people crave it every year.”

The chocolate party starts fashionably late at 10 p.m., June 12, so you may hop on a film-fest shuttle to watch the tribute to actress Amber Heard, and then the first film of the evening, a short called “73 Questions,” to be followed at 8 p.m. by the quirky “Ideal Home” with Paul Rudd and Steve Coogan. Then you may hop on the shuttle for par-tay time!

Chocolate is a serious, lifelong passion for Pastry Chef Trouyet, so get your appetites ready to indulge in over-the-top delights from six walkabout stations and a buffet with pick-up treats as well. 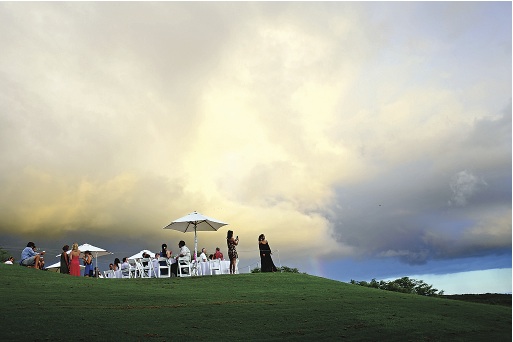 The annual Taste of Wailea features jaw-dropping views of the Wailea coastline and Neighbor Islands beyond.

“As a classically trained pastry chef, I say, ‘Taste of Chocolate is a dream come true,’ “ says the Frenchman, who has impressed diners from Europe to Bora Bora in the South Pacific.

“Chocolate is my passion, and this under-the-stars event allows my team and me full creative license,” he says. “We work for weeks in anticipation of the event, and I’m excited to see this year’s vision come to life. Chocolate lovers will not be disappointed.”

Sip between sweet bites of melted raspberry spheres, banana souffles, chocolate Tonka-bean cremeux and mousse with liquid nitrogen. A savory station will be an Italian masterpiece with a fontina cheese risotto infused with bitter-cocoa jelly.

As for the grand-finale food event, Taste of Wailea, Rivers calls it, “the granddaddy, the ‘crown jewel’ of all the festival parties. It tees off from 5 to 7 p.m. June 16 at Wailea Golf Academy.

Stroll down to Celestial Cinema and see the tribute to actor Nick Robinson, followed by “Back to Burgundy” at 8 p.m. and “Off The Menu” at 10 p.m.

Tommy Bahama will do gumbo with Jidori chicken and Portuguese sausage and onaga-snapper ceviche. Four Seasons will present ahi tataki and grilled flat-iron steak; Ruth’s Chris will make its famous veal ravioli and white-chocolate pudding; Mulligans on the Blue and Fabiani’s will do four dishes including hand-carved corned beef, Cajun-seared ahi, gnocchi Cristalla and assorted macaroons; Monkeypod Kitchen will oven-char Brussels sprouts and make coconut-corn chowder; and Grand Wailea will present yellowtail ahi with avocado and shiso and roasted beets with chevre.

Taste of Summer: The pre-twilight launch party will swing from 5 to 7 p.m. Wednesday at Grand Wailea Beach House Lawn.

The Taste of Chocolate on June 15; • Maui Film Festival photo

The Taste of Wailea on June 16; • Maui Film Festival photo

The annual Taste of Wailea features jaw-dropping views of the Wailea coastline and Neighbor Islands beyond.