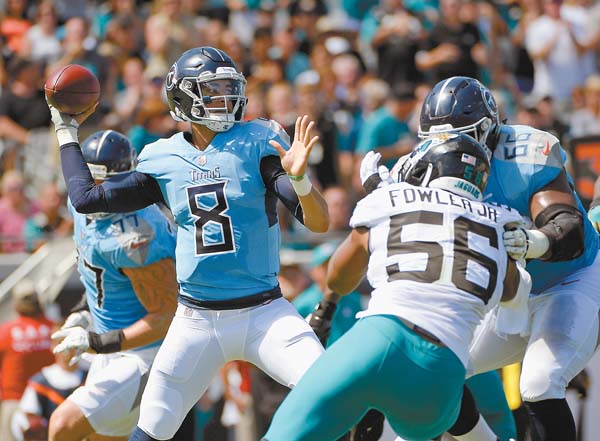 The Titans’ Marcus Mariota looks for a receiver during Tennessee’s 9-6 win over Jacksonville on Sunday. AP photo

The Saint Louis School graduate directed three scoring drives in relief of Blaine Gabbert, including one in the fourth quarter, and Tennessee knocked off the Jaguars 9-6 Sunday for their third straight victory in the series. Mariota improved to 5-2 against Jacksonville, his most wins against any opponent.

“He was fantastic,” Vrabel said. “He cares about this team immensely. He wants what’s best for this team. You saw him come in there, get us some first downs and give us a spark.”

Mariota sat out last week’s victory against Houston because of an elbow injury sustained in the season opener. He was still experiencing arm weakness along with numbness and tingling in two fingers this week, saying the injury affects the velocity and spin he gets on the football.

Mariota replaced Gabbert (concussion) in the first quarter and did just enough to beat the Jaguars (2-1) for the fifth time in the past six meetings.

Mariota completed 12 of 18 passes for 100 yards and ran for 51 more, including a 15-yard gain on a third-and-1 play late. The Titans (2-1) milked the clock from there and ended up celebrating an early lead in the AFC South.