Telling men to ‘step up,’ Hirono strides into spotlight 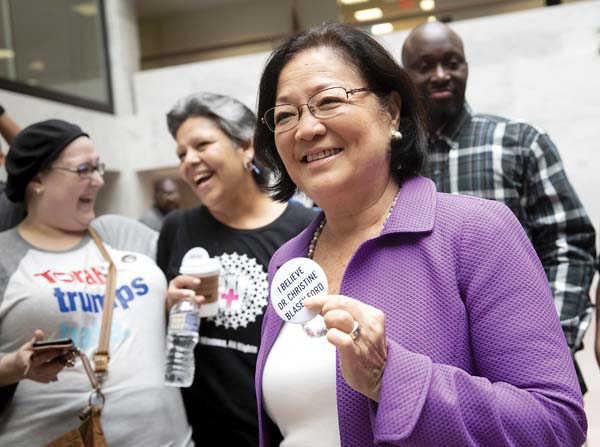 Sen. Mazie Hirono, D-Hawaii, a member of the Senate Judiciary Committee, is welcomed by protesters opposed to President Donald Trump’s Supreme Court nominee, Brett Kavanaugh, as they demonstrate in the Hart Senate Office Building on Capitol Hill in Washington on Thursday. AP photo

WASHINGTON — Hawaii’s Sen. Mazie Hirono, one of only four women on the 21-member Senate Judiciary Committee, asked Supreme Court nominee Brett Kavanaugh the same questions on sexual harrassment she has asked dozens of other nominees.

Had Kavanaugh “made unwanted requests for sexual favors” or committed verbal or physical harrassment of a sexual nature since he became a legal adult? And had he ever faced discipline or settled with anyone over that kind of conduct?

Kavanaugh said “no” to both questions at his confirmation hearing earlier this month. But few in the room, or watching on television, knew at the time how relevant Hirono’s questions would prove to be.

A little more than a week later, a California professor named Christine Blasey Ford contended that at a house party in the 1980s, a drunken, 17-year-old Kavanaugh tried undressing her and muffling her cries on a bed before she fled. Kavanaugh denies that account.

Ford’s accusation has upended his previously smooth confirmation process for Kavanaugh — and thrust the often low-key Hirono, 70, into the spotlight as one of the most outspoken senators in Ford’s defense.

“I just want to say to the men in this country: Just shut up and step up. Do the right thing, for a change,” Hirono said Tuesday, stealing the show at a news conference that featured several high-profile Democrats.

Hirono told The Associated Press on Thursday in an interview that her “shut up and step up” comment hasn’t just resonated with women.

“I have talked to a lot of men who are really happy I said that, because they want to be part of the movement,” Hirono said.

Hirono’s outrage — and her commitment to holding male nominees accountable — has a deep history. When she was a child, her mother fled an abusive marriage in Japan and took Hirono and her brother to Hawaii, crossing the Pacific in steerage of an American ship.

“There is an environment where people see nothing, hear nothing and say nothing,” Hirono said this week about the #MeToo movement against sexual misconduct. “That is what we have to change.”

Hirono became a state legislator in 1980, where she says she worked on improving sexual assault laws. The issue remained important to her as she became Hawaii’s lieutenant governor in 1994, a member of the House in 2007 and eventually replaced longtime Democratic Sen. Daniel Akaka in 2013. She has kept a mostly low profile in her 12 years in Washington, but that has changed in the past year.

At a news conference Thursday, Hirono and New York Sen. Kirsten Gillibrand defended Ford and said the Judiciary panel is being unfair to her. President Donald Trump and Senate Republicans have rejected Ford’s request for an FBI investigation of her accusation, which she says should take place before she testifies. Gillibrand accused Republicans of “bullying her.”

As Hirono arrived at the press conference, people cheered her arrival, with several yelling her name. Her newfound political celebrity was also apparent earlier in the day, when protesters against Kavanaugh’s nomination greeted her with cheers and applause at a Senate office building. Some of the protesters snapped selfies with her.

“They knew who I was and came up and encouraged me, and I thanked them,” Hirono said. “It was very energizing.”

It wasn’t the first time Hirono has interacted with protesters. Earlier this year, she was one of just a few senators who mingled among a large group in the same Senate Hart Office building who were opposing the Trump administration’s separation of families at the border. Hirono often calls herself the only immigrant in the Senate, and she is the sole senator who was born outside the United States to parents who were not citizens, according to the Senate Historical Office.

She acknowledges her profile has risen in recent months, saying “The Trump administration gives me so many more opportunities to be verbal and vocal.”

Hirono’s public ascent has also come amid health troubles, as she announced last year that she had been diagnosed with kidney cancer. She is still undergoing immunotherapy treatment.

“She’s a badass,” said Christina Reynolds of the advocacy group EMILY’s List, which supports women candidates. “The fact that she’s getting up there and calling it out, I think it’s inspiring for us to watch.”

Senate Democratic leader Chuck Schumer says Hirono may have seemed soft-spoken over the years, but adversaries shouldn’t forget that she has a “spine of steel.”

Hirono is encouraging other women to be active in politics, predicting their frustration will be felt in the outcome of the midterm elections.

“We work really hard to get elected,” Hirono said. “Nobody hands anything to us.”