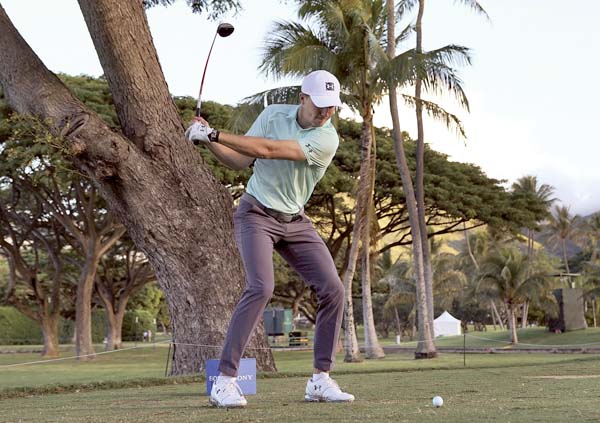 Jordan Spieth hits from the second tee during the pro-am round of the Sony Open at Waialae Country Club on Oahu on Wednesday. AP photos

HONOLULU — Jordan Spieth showed up in Hawaii three years ago hopeful that a new year would be more of a continuation than a fresh start. Back then, he was coming off two majors, five victories, the FedEx Cup and he was No. 1 in the world.

He’s in a different spot at the Sony Open this week at Waialae Country Club.

Spieth went through an entire year without a trophy for the first time as a pro. He didn’t have even a mathematical chance at the FedEx Cup because he didn’t make it to the Tour Championship for the first time. Spieth starts the year at No. 17.

So is this a fresh start or a continuation? 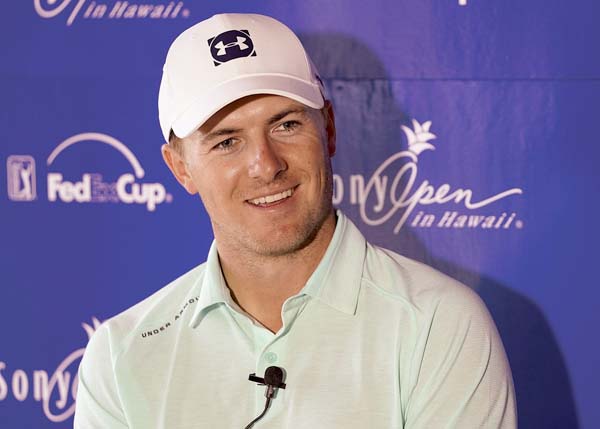 Jordan Spieth speaks to the media after his pro-am round. Spieth begins his 2019 slate at No. 17 in the world ranking.

In his case, a little of both.

“Thinking of something as a fresh start, that you can throw away some of the struggles from last season, is beneficial,” he said Wednesday. “But I was doing really good work as the season went on where I was focusing my work, which was in the putting. So I don’t want to necessarily wash all that away. I was doing the right stuff. It’s then just a continuation of that work as I start to dial it in more and more.

“So yes and no,” he concluded. “I guess mentally, yes. But physically, no.”

He wasn’t even sure he was coming to Oahu until a few weeks ago. Spieth wasn’t eligible for the winners-only field at Kapalua. He got married over Thanksgiving weekend, which cut into a typical schedule of preparations for the new year. His expectations aren’t as high as they might be.

The Sony Open starts today as the first full-field event of 2019, with 23 players who were at the Sentry Tournament of Champions last week. That includes Justin Thomas, who won at Waialae two years ago by opening with a 59 and breaking the PGA Tour’s record for 72 holes with a 253 total.

Patrick Reed also is in the field, the first time Reed and Spieth have been in the same tournament since the Ryder Cup, remembered as much for the European team’s lopsided victory as Reed blaming Spieth for them not playing together in France. Spieth and Thomas went 3-1 as partners, while Reed and Tiger Woods went 0-2.

“I was a bit surprised,” Spieth said about Reed’s post-Ryder Cup comments. “It didn’t bother me. I was just like, ‘Whoa.’ There was nothing lead up to that … nothing told me that was going to happen.”

He doesn’t expect any awkward moments, even if they’re paired with each other at some point. Reed generally gets along well with everyone inside the ropes, though he tends to practice by himself.

“It’s not like he’s ever been extremely cordial to individuals, anyway,” Spieth said. “I don’t think anything will be any different. … I don’t think anything will change with how we’ve talked to each other. It will be interesting if we’re competing on Sunday, what will be talked about outside of us. Between us, it won’t be anything extra than what there always is, which is peers trying to win a tournament.”

Spieth wants to win, more than anything else. And it really doesn’t matter who he beats.

His last victory was the British Open in 2017, the third leg of the career Grand Slam. His putting stroke got away from him early last year, and about the time he sorted that out, the long game was no longer reliable. More than not winning, Spieth rarely contended.

In his 23 events at stroke play, he missed the cut five times and finished at least 10 shots out of the lead at nine other tournaments.

And still was a fraction away from being a great year. He clipped a tree on the 18th hole at Augusta National with a chance to win another green jacket, and he had a share of the 54-hole lead at the British Open.

“If I play 18 and make birdie at Augusta and end up winning that day, then all of a sudden it’s looked at as one of the best years I’ve had in my career, and it’s all a difference of one hole,” he said. “That’s where you start look at it like … what can you get caught up in? I still had the opportunity to win two majors last year, which is the idea I want every year.”

Spieth does have one concern starting the new year. He already figured out he can’t play effectively while wearing his wedding ring.

“It’s just my putting,” he said. “When I’m cross-handed, kind of jams into my grip. Unfortunately, that means I’ll probably lose some rings.”