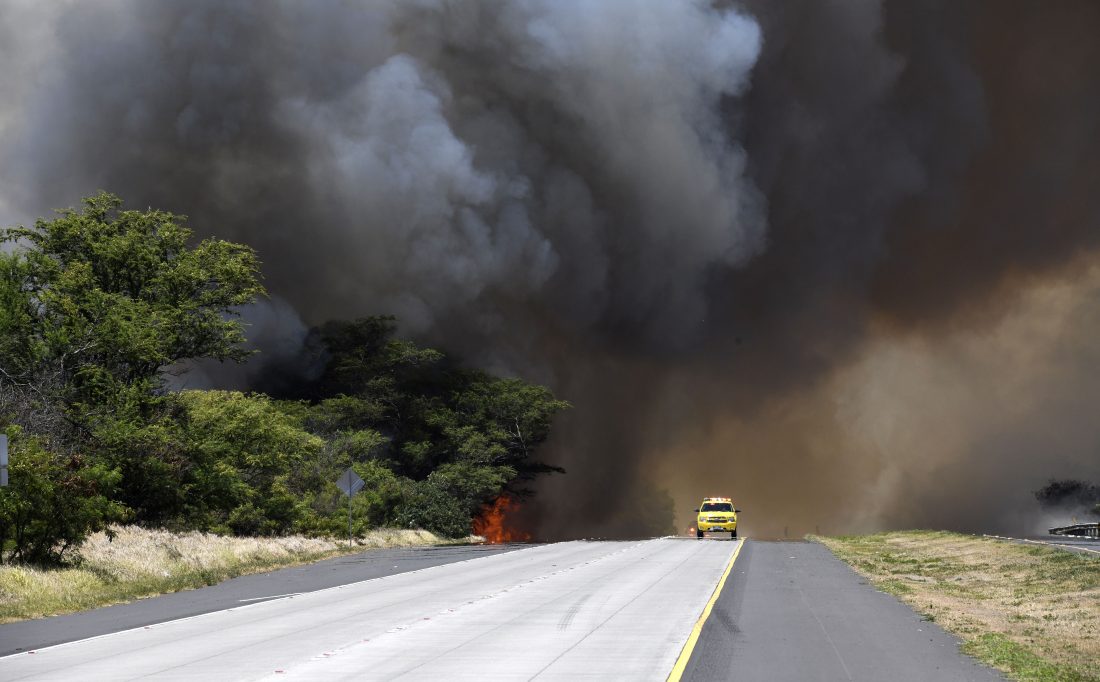 Motorists left Kihei on Thursday evening through charred Maui Veterans Highway amid a rapidly moving brush fire that consumed 3,000 acres as it swept from Kahului toward north Kihei due to high winds.

Access into Kihei on the highway was reopened at 9:30 p.m. after being closed in the afternoon. The county said at about 10 p.m. that North Kihei Road was reopened.

A Kihei shelter reached capacity at 450 people. A mandatory evacuation of north Kihei residents was lifted at about 9:30 p.m.

All ground firefighter crews were set to work through the night to try to contain the fire, which remained a “very dynamic situation,” according to Maui Fire Department Fire Services Chief Rylan Yatsushiro late Thursday night.

Evacuations were ordered by the county for north Kihei and Maalaea, including areas in Sugar Beach, Kamalani subdivision and residences along Piilani Highway at about 3 p.m. Thursday. The Maalaea evacuation became voluntary in the early evening. 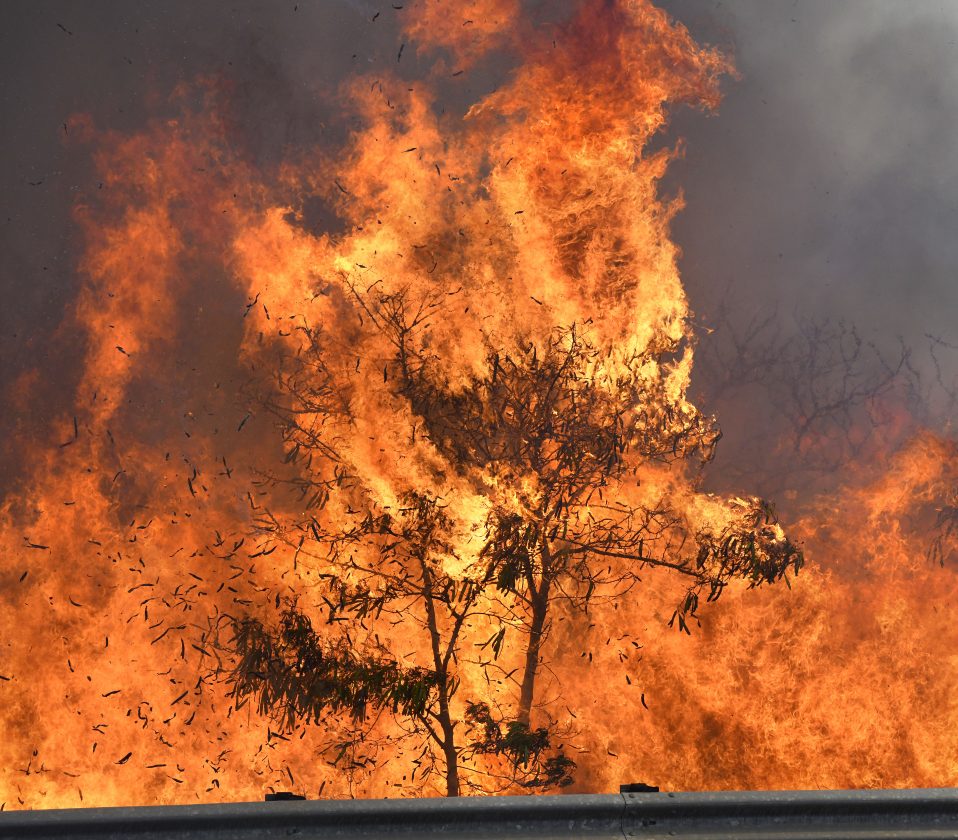 Mayor Michael Victorino held a news conference to give shelter options and road closures before he heading to survey the fire via air around 4:30 p.m.

Open shelters include the following:

The shelter at Kamalii Elementary School reached capacity of about 450 people around 4 p.m., county officials said. 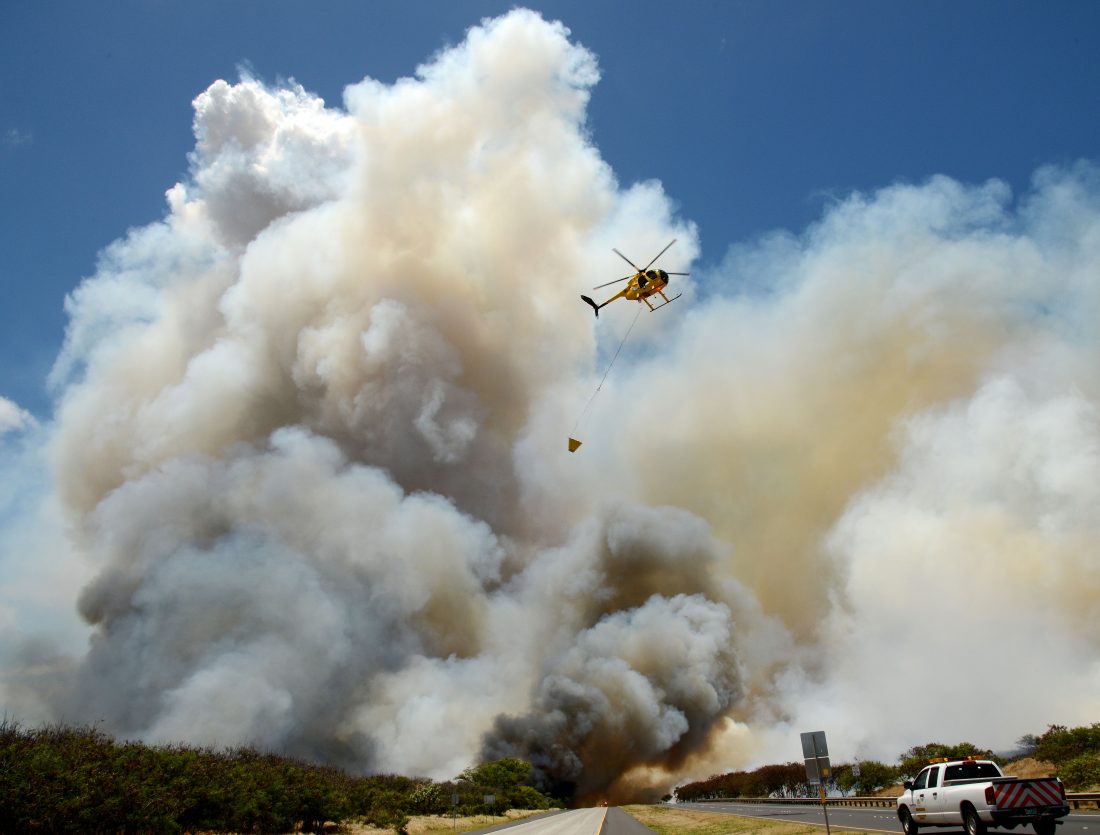 The state Department of Transportation, which reported at 4 p.m. that flights were being diverted from Kahului Airport, which was on generator power, said the airport was open again at 6:15 p.m. and on regular power.

Some airlines were offering travel vouchers. People catching flights were urged to call their airlines to confirm reservations; there were reports of flight crews unable to get to the airport for their flights.

Emergency 911 calls were being disrupted, said police spokesman Lt. Gregg Okamoto. He urged people to continue to call until they through.

Flames were visible in north Kihei and smoke filled the air in the afternoon, residents reported. Flames were within 100 yards of Maui Veterans Highway at about 2 p.m.

Winds fanning the flames were estimated at 15 to 20 mph with higher gusts, he said. The fire was moving south across fallow fields with no structures immediately threatened earlier in the day, he said.

The Maui Humane Society, located on the Kuihelani Highway side of Maui Veterans Highway, had earlier said that it was closing for the safety of workers and animals. But at about 1:30 p.m., Humane Society spokeswoman Nancy Willis said in an email: “We are evacuating. We need everyone to bring carriers and help transport to Maui High.”

The agency reported moving crates and kennels of animals to its evacuation site at Maui High School, Perry added. At 2:15 p.m., the evacuation was complete.

Three helicopters responded to the scene to make air drops of water. The department has three engines, three tankers and two battalion chiefs on scene. The department also has received assistance with bulldozers from West Maui Land Co., Goodfellow Bros. and the county Department of Public Works.

Traffic was slow on highways in the Central Maui area. There were reports of cars five deep on the shoulder of Maui Veterans Highway across the street from Puunene Shopping Center.

At about 1:30 p.m., Maui Electric Co. spokeswoman Shayna Decker said that the fire was not affecting any equipment or facilities. The Maalaea Power Plant and power lines are in the area of the fire.

“We are monitoring the situation and taking preventative measures, including watering the perimeter of the Maalaea Generating Station,” she said.

At 1:50 p.m., there was a power outage in South Maui affecting 4,000 customers due to the fire, Maui Electric Co. said. Electricity was restored to majority of customers by 3 p.m. after rerouting power. A remaining three customers are offline until the fire can be contained, and crews can assess the situation and restore power, said MECO spokeswoman Shayna Decker.

Dylan Bonick, who had donned his gas mask after living through fires in California, was taking shelter at Kamalii Elementary School.

“I know what smoke inhalation is,” said the 10-year resident of Kihei. “This is the real deal. I’m not taking any chances. People are going to feel sick in a couple of hours.”

A large brush fire in Kahului near Waiko Road that started late morning Thursday can be seen from Wailuku Heights. MAILE CREWDSON photo