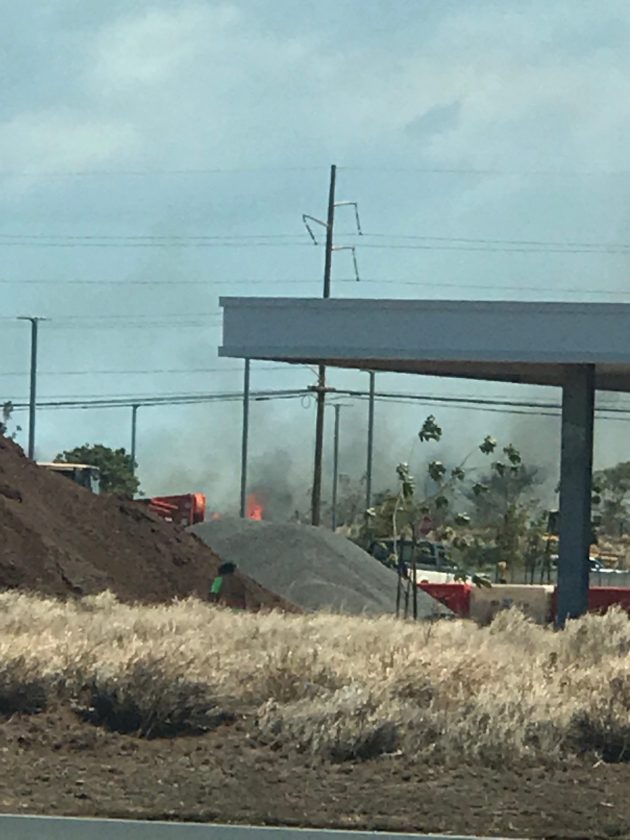 9:30 P.M. UPDATE: The County of Maui announced that the Puunene fire is 80 percent contained. Maui police say all roadways are reopened.

8:30 P.M. UPDATE: The Maui Police Department is looking for a possibly maroon-colored Ford dually-type truck, early to mid-2000s model with truck racks. Police are interested in identifying this vehicle as well as the owner as it was seen leaving the area of the Hookele Street fire today.

Tips can be emailed to fire.damage@mpd.net or you can message your contact information on our MPD Facebook page. You can also call (808)244-6434 or 911 in an emergency.

7 P.M. UPDATE: The Puunene blaze, which is unrelated to the massive Central Maui wildfire that burned to Kihei, was deemed 35 percent contained this evening after consuming 200 acres and two abandoned structures.

The new fire was estimated to have covered an estimated 200 acres, and it was 35 percent contained as of 5:45 p.m., fire officials said.

Two abandoned structures in the brush were destroyed, he said.

There were no other reports of structural damage or injuries.

Multiple MPD engine companies and tankers were deployed to the second fire, along with three state crash rescue units from Kahului Airport. Private contractors and County of Maui departments assisted with heavy equipment and tankers.

3:30 P.M. UPDATE: Another brush fire broke out Friday afternoon in the area of the new Lowe’s store and the under construction Safeway in the Maui Business Park in Puunene, leading to evacuations, according to county officials.

County officials said this fire was unrelated to the fire that began Thursday along Kuihelani Highway.

Two engine companies, two water tankers, the Air One helicopter and a private bulldozer are responding.

Around 2 p.m. the county said that police were not ordering evacuations at this time because the fire is moving away from the buildings. Lowe’s held a voluntary evacuation of store employees.

Puunene School and Puunene Post Office have been evacuated. Feed My Sheep and Maui Economic Opportunity are also evacuating from the area.

There are reports that Target also is being evacuated.

Paratransit and Human Service Transportation services may be interrupted, the county said. Debbie Cabebe, CEO of Maui Economic Opportunity, which operates both services, said Friday afternoon that all nonmedical trips will be canceled for the rest of the day.

Anyone who was transported by MEO Human Services or Paratransit will be returned as scheduled to the best of MEO’s ability, she said.

All medical trips and dialysis trips will be performed as scheduled as best as MEO is able, she said.

MEO has evacuated the transportation site at Puunene and drivers are being staged in safe areas throughout the community. Office staff are relocating to the MEO Family Center in Wailuku, Cabebe said.

Phone and internet connection is spotty. For MEO Transportation-related calls, for emergencies only, call 249-2990.