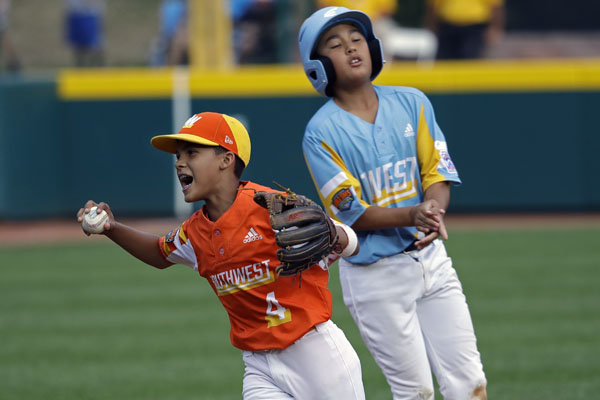 Louisiana shortstop Stan Wiltz celebrates after forcing out Maui's Bransyn Hong at second base to end the game. -- AP photo

The game ended with the tying run at the plate, but Central East Maui’s championship run at the Little League World Series ended Saturday with a 9-5 loss to River Ridge, La., in the United States championship game.

CEM entered the bottom of the sixth and final inning down 9-0, but scored five times and had the bases loaded when the game ended on a double play. Maui got two bases-loaded walks, an RBI single from Duke Aloy and a two-run single by Branson Hong in the final frame.

Maui will face Chofu City, Japan, on Sunday in the consolation game for third place at 4 a.m. HST on ESPN television.

The CEM players are due to arrive at Kahului Airport at 2:42 p.m. Monday on American Arilines flight 432.