Lahainaluna High School’s Nainoa Kulukulualani-Sales runs in for a touchdown in the first quarter of the Lunas’ 48-0 win over Maui High on Saturday night at War Memorial Stadium. — THE MAUI NEWS photo 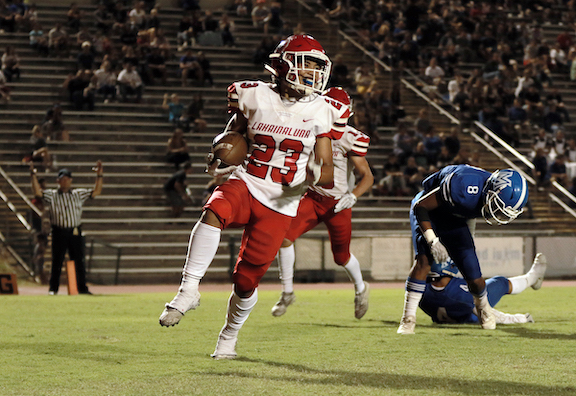 Lahainaluna High School's Nainoa Kulukulualani-Sales runs in for a touchdown in the first quarter of the Lunas' 48-0 win over Maui High on Saturday night at War Memorial Stadium. -- THE MAUI NEWS photo

Now, the focus for both is the second round of Maui Interscholastic League play. Lahainaluna (4-0) won its 21st MIL game in a row — adding to its league record — while the Sabers fell to 0-4.

“We got everybody into the game,” Lahainaluna co-head coach Dean Rickard said. “We were fortunate that we were ahead to the point where we could do that. We realized Maui High was shorthanded with a lot of kids on injuries and whatnot.”

Lahainaluna pushed the lead to 48-0 on the first play of the second half when Tre Rickard ran back the kickoff 84 yards for a touchdown.

Lahainaluna took a 42-0 lead into the locker rooms at halftime to activate the mercy-rule running clock for the entire second half. 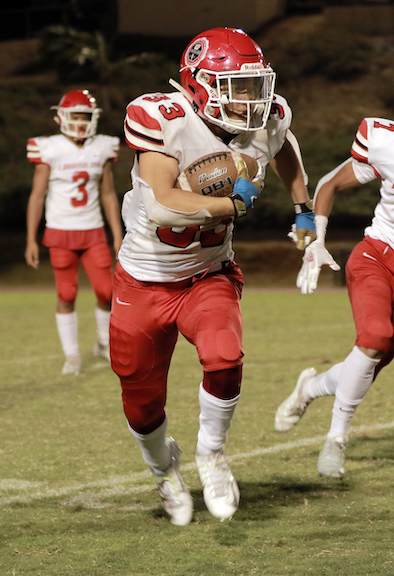 The Lunas quickly took total control, scoring touchdowns on each of their first two plays from scrimmage after forcing three-and-out possessions and taking advantage of short punts by the Sabers.

The first score was a pretty 39-yard pass from Esekielu Storer to Kai Bookland, and the second was a 31-yard scamper around the right corner by Nainoa Kulukulualani-Sales that made it 14-0 with 7:17 left in the first quarter.

The Lunas pushed the lead to 20-0 on their next possession, going 65 yards in nine plays. Joshua Tihada dove in from the 1 for the touchdown.

Tihada capped the next drive with a 14-yard scoring run to increase the lead to 28-0 with 6:38 to go in the first half. Tihada also had 19-yard run on the drive that also included a 27-yard pass from Storer to Devon Sa-Chisolm.

Sa-Chisolm scored on a highlight-reel 50-yard catch on a pass from Storer to make it 35-0 with 1:42 left in the half. 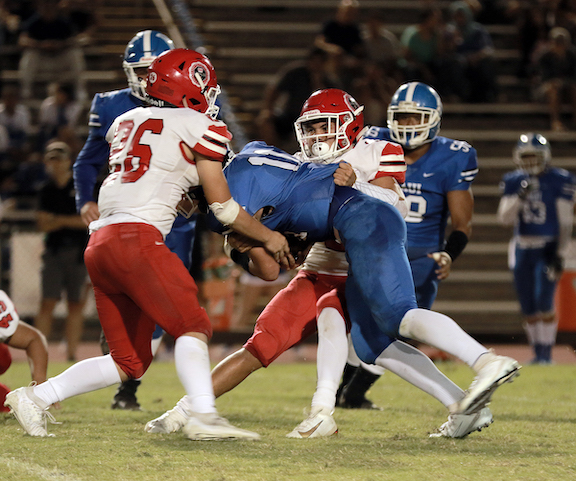 Tihada added the final score on a 1-yard run with 2 seconds left in the half after the Lunas recovered a Maui High fumble on the Sabers’ 21-yard line.

Meanwhile, the Sabers had 15 players on the sidelines in street clothes due to injuries. The Lunas did not punt in the game.

MIL rushing single-season record holder Naia Nakamoto did not attend his second straight game for the Sabers, but coach Rodney Figueroa said he could not comment on his status.

“That’s why they’re contenders every year,” Figueroa said. “They do a good job out there in Lahaina, they’re very well-coached, they’re a very good team.”

The Sabers must now go back to the drawing board. The two-time defending MIL Division I champions do not get their second-round bye until the next-to-last week of the season, meaning they will play eight straight weeks, including their 20-19 nonleague win over Kauai.

“I think we saw tonight, these kids, they played the full game,” Figueroa said. “We saw some very big positives coming out of these four quarters. That was very good — it gives us some things to work on.”