Baldwin High School’s Isaiah Richards (9) celebrates a touchdown catch with Laakea Asuega-Stark in the first quarter of the Bears’ 27-21 victory over the Sabers on Saturday night at War Memorial Stadium. — THE MAUI NEWS photo

Baldwin’s Maake Panuve brings down Maui High quarterback Brex Delray for a sack in front of Richard Batze in the first quarter. — THE MAUI NEWS photo 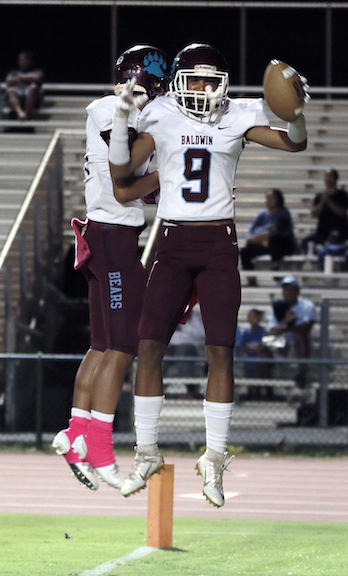 Baldwin High School's Isaiah Richards (9) celebrates a touchdown catch with Laakea Asuega-Stark in the first quarter of the Bears' 27-21 victory over the Sabers on Saturday night at War Memorial Stadium. -- THE MAUI NEWS photo

WAILUKU — It was clearly not the way they drew it up, but it will do for the Baldwin High School football team.

The Bears frantically held on for a 27-21 victory over winless cross-town rival Maui High on the Sabers’ senior night Saturday at War Memorial Stadium.

The victory sent the Bears back to the HHSAA Division I state tournament for the first time since 2016, breaking a two-year streak of Maui Interscholastic League Division I titles for the Sabers. Baldwin is 4-2 in the MIL, 1-1 in the second round. The Sabers fell to 0-7, 0-3.

“Tough game, went down to the wire,” Baldwin coach Pohai Lee said. “We’re not there yet by any stretch, so we’ve just got to keep at it.”

Lee said of the state tournament berth, “To tell you the truth right now, it makes us appreciate it even more after being out for two years. This group, like we said, was a committed group — they wanted to make that as a goal and kudos to them, they did it.” 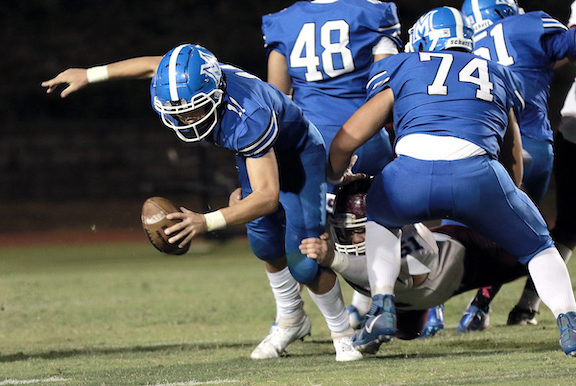 Baldwin’s Maake Panuve brings down Maui High quarterback Brex Delray for a sack in front of Richard Batze in the first quarter. -- THE MAUI NEWS photo

This game was not decided until the final moments when the Bears stopped the Sabers on downs with 1 minute, 42 seconds to go at the Baldwin 34-yard line.

“We expected that,” Lee said of the battle the Sabers put up with just 30 players dressed for the game. “We didn’t expect them to lie down. It was their big game, we knew Figgy was going to get them ready.”

“Figgy” is Maui High head coach Rodney Figueroa, who tipped his hat to his team after the tough loss.

“They haven’t, they haven’t given up all season long,” Figueroa said. “It’s our senior night, so the seniors, they led tonight, got in there and battled. The younger kids stepped up, followed the seniors’ lead.”

Baldwin won the field-position battle to take a 27-13 lead late in the third quarter. 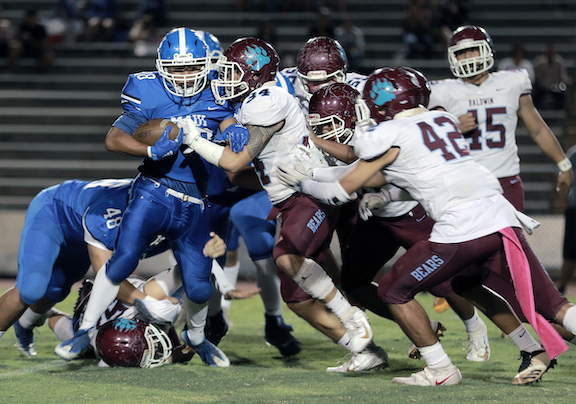 The Bears took the opening possession of the second half and drove to the Sabers’ 9-yard line, where they lined up for an apparent 26-yard field-goal try by Isaiah Souza. Instead, they ran a fake on fourth-and-3 and gained just 1 yard after a direct snap to Souza.

The Baldwin defense forced a three-and-out series and the Bears took over on the Sabers’ 28-yard line after a 20-yard punt. The Bears could not take advantage and punted into the end zone with 5:39 to go in the third quarter.

Again, the Baldwin defense forced a three-and-out, got a 14-punt return by Josiah Souza and cashed in a backbreaking touchdown on a 10-yard pass from Laakea Asuega-Stark to Ben Tokanang. The scoring play capped a seven-play, 34-yard drive and came with 47 seconds to go in the third quarter.

The Sabers took advantage of a fumble recovery by Sione Lolohea in the Bears’ backfield with 6:27 to go in the game. Maui High then went 26 yards in four plays, creeping within six points on a 6-yard touchdown pass from Brex Delray to Elijah Evangelista and a two-point conversion run by Delray with 5:00 left.

The Bears took a 21-13 lead into the locker rooms at halftime after a wild first that saw three turnovers by each team and three defensive touchdowns.

The Bears took a 7-0 lead when Isaiah Richards caught a 6-yard touchdown pass from Asuega-Stark with 7:37 left in the first quarter. That capped a six-play, 44-yard drive that included two pass receptions by Kapena Kamai for 32 yards — Kamai finished with six catches for 150 yards.

The Sabers appeared to score on a 44-yard fumble return by Evangelista a few minutes later, but that play was called back by a block-in-the-back penalty.

The Bears pushed the lead to 14-0 on a 63-yard touchdown strike from Asuega-Stark to Kamai with 9:49 to go in the second quarter.

The Sabers then closed within a point on two defensive touchdowns, the first coming when Lolohea fell on an errant snap in the end zone with 5:12 remaining in the first half on a play that started at the Baldwin 20-yard line.

The Sabers’ Penisoni Panuve then returned an interception of an Asuega-Stark pass 30 yards for a touchdown with 1:28 to go, but the extra point went awry on a bad snap, leaving the Sabers trailing 14-13.

The Sabers then stopped Baldwin on downs, but on the fourth play of the ensuing Maui High possession Delray was sacked by Mafatini Mafatini — the ball was fumbled and then scooped up on a 52-yard touchdown return by Josiah Sniffen with two seconds left in the half.