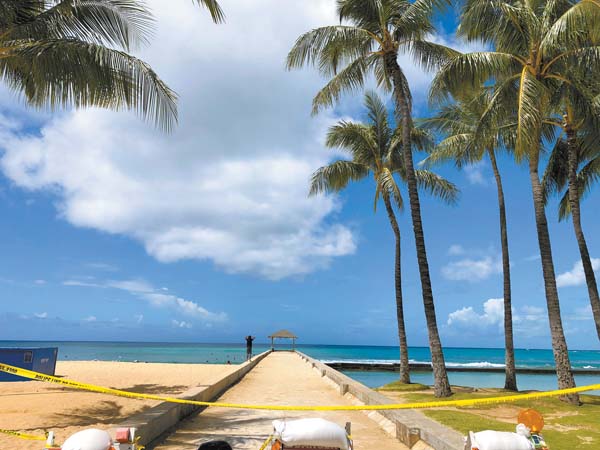 A man walks along a closed pier on Waikiki Beach in Honolulu on Saturday. Like many cities across the world, Honolulu came to an eerie standstill this weekend as the coronavirus pandemic spread throughout the islands. AP photo

HONOLULU — Like many cities across the world, Honolulu came to an eerie standstill this weekend as officials implemented measures to slow the spread of the coronavirus pandemic throughout the islands.

Hawaii officials went beyond the standard stay-at-home orders and effectively flipped the switch on the state’s tourism-fueled economic engine in a bid to slow infections. As of Thursday, anyone arriving in Hawaii must undergo a mandatory 14-day self-quarantine.

The unprecedented move dramatically reduced the number of people on beaches, in city parks and on country roads.

It’s too soon to know the total impact the shutdown will have on the tens of thousands of Hawaii residents who rely on tourism dollars to pay for the high cost of living in the state.

Hawaii is seeing unemployment claims soar during the coronavirus pandemic. According to the U.S. Employment and Training Administration, applications for temporary unemployment assistance in Hawaii increased during the week ending on March 21 as the U.S. economy bears the weight of growing fears around COVID-19. The state Department of Labor and Industrial Relations says that for just this week through Wednesday, over 67,000 initial claims were filed. That’s nearly 11 percent of Hawaii’s eligible pool of workers.

The mandatory self-quarantine rules apply to both residents and visitors. But the prospect of being forced to stay in a hotel room or other accommodations for 14 days while on vacation effectively ended the daily influx of tourists.

Airlines dramatically reduced their service to the islands. Nearly 100 hotels across the archipelago closed, with more expected to follow this week.

After the mandatory quarantine rules went in place Thursday, visitor arrivals at state airports dropped dramatically. Of the 1,207 people who flew into Hawaii on Saturday, only 151 were visitors, the Hawaii Tourism Authority said.

All restaurants, bars and nightclubs are closed, though those businesses can offer take-out or delivery service if they choose.

Hawaii’s famous green, black and white sand beach parks were closed, but state officials allowed, and in some cases encouraged, residents to get into the water for exercise and therapy. That wasn’t easy as people arriving at public beach parking lots found yellow caution tape and barricades.

On Saturday, there were still a fair number of people walking about and getting in the water, but compared to a typical weekend in Waikiki, the tourist mecca was essentially empty.

The few people who did unpack their towels and beach chairs were met by police who told them to either get in the water or go home.

In a statement released Sunday, state officials said 24 new coronavirus cases had been confirmed, bringing the statewide total to 175. About 7,500 people have been tested.

Drive-thru screening sites were set up across the islands this weekend, and officials on Oahu reduced their bus service in response to the outbreak.

For most people, the new coronavirus causes mild or moderate symptoms, such as fever and cough that clear up in two to three weeks. For some, especially older adults and people with existing health problems, it can cause more severe illness, including pneumonia and death.