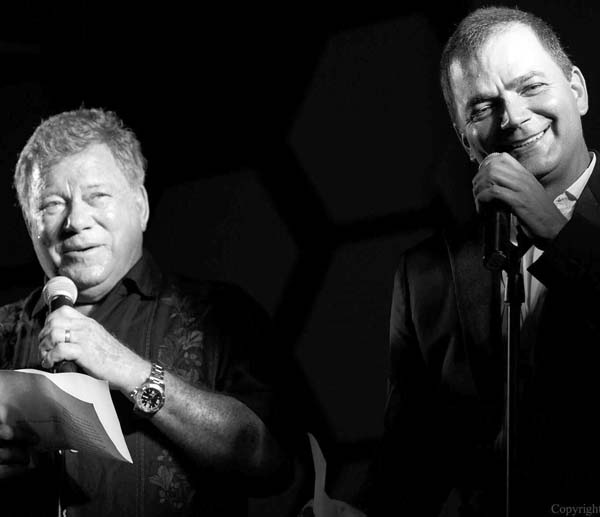 “This is the 33rd show, and it sadly will be the last,” said Brian Evans, when I asked about his hobby producing the celebrated Maui Celebrity Series. “I was never a promoter, as any credible promoter could confirm. I’ve always just been a singer who did this fun thing on Maui. It’s had its challenges, but the payoff is seeing that crowd enjoy the show, and having been able to give locals the chance to open for national stars, which is now on their resume forever. Now when a local makes the leap to L.A., they can say they have opened for Rob Schneider or David Spade.”

Over the years, one of Evans’ most popular events has been the appearance of William Shatner, who will be returning to perform for a third time Dec. 30. This time around, the Historic Iao Theater in Wailuku will host, and I asked Shatner his thoughts on performing on the same stage where Frank Sinatra, Donald O’Connor, Mickey Rooney, Bob Hope and Betty Hutton once performed.

“I’m looking forward to it,” he said. “I’m so proud to be able to trot those boards. The siren call of Hawaii is strong and I always look forward to returning. We were just on the Big Island last month and my wife will be joining me as we celebrate the new year on Maui.”

“He’s my inspiration,” said Evans, regarding Shatner. “I’ll always work with Shatner so long as he lets me, it’s beyond a privilege and he and Elizabeth (his wife) are two of my favorite people. Their support has helped me tremendously in good times and bad. He was the last person ever to be photographed with my mother, Helen, who we lost to sleep apnea in 2012. Because of the series, Jeff Bridges has endorsed the American Sleep Apnea Association and that has given the organization much-needed exposure.”

Evans began as a teen actor on TV shows like “Full House” and “Beverly Hills 90210.” I asked if his acting background served as a springboard to his classic crooner singing career.

“I always loved this kind of crooner style and if you look at who I brought to Maui, I was their opening act on the Mainland or worked with them in some capacity, such as Bob (Saget). We’ve received commendations from Governor Lingle, then Abercrombie, and most recently Ige for creating the series and promoting the island. Shep Gordon, who I regard as one of the most brilliant minds I’ve ever met, helped me financially to kick it off in the beginning when we just started.”

Now that the Maui Celebrity Series is coming to a close, Evans has announced that he is considering a 2018 run for the Hawaii seat in the United States Congress in the Republican primary.

A great deal of Shatner’s stage appearances involves taking questions from the audience, and it should come as no surprise that most revolve around “Star Trek.” I asked the 85-year-old actor if he ever tires of talking about the franchise.

“No, I’m OK with it,” he shared. “It’s an extraordinary phenomenon that may never be eclipsed because it would take 50 years for another show to prove itself as long-lasting as ‘Star Trek.’ Sometimes I fool around and make jokes, but it was a wonderful show and I’m happy to accommodate the fans.”

One example of “fooling around” with his fans occurred in a sketch Shatner wrote for “Saturday Night Live” appearing as himself while addressing a “Star Trek” convention. In the sketch, Shatner said, “Before I answer any more questions there’s something I wanted to say. Having received all your letters over the years, and I’ve spoken to many of you, and some of you have traveled hundreds of miles to be here, I’d just like to say — get a life, will you people?”

Even at 85, Shatner shows no signs of letting up. NBC’s “Better Late Than Never,” a reality series he co-stars on with Terry Bradshaw, George Foreman and Henry Winkler, was just renewed for a second season.

“They’re all enormous personalities,” Shatner said of the unlikely world-traveling quartet. “You just have to elbow your way in there, but elbowing Bradshaw is impossible. I can push Henry around, he’s the only one that’s smaller than me. Jokes aside, I’m really looking forward to it, they’re wonderful guys and we had a lot of fun last season.”

Just prior to my scheduled interview with Shatner, a social media death hoax about the actor emerged, which was quickly dispelled. I asked if he had any comments.

“Yes, that was true — you’re actually talking to a ghost right now,” he joked.

A second piece of social media gossip emerged as well, which claimed that Shatner had been seen practicing “Gangnam Style” dance on a hotel balcony and was planning to include it in his live act. He laughed when I asked if it was true.

“No, but you know, modern social media must make things difficult for entertainment journalists like you — it’s fake news. But I can share that I am planning to make a documentary about Yes, and I’ve been working on some songs with Billy Sherwood, so I may be going out on tour with a few members of Yes in 2017.”

* The Maui Celebrity Series presents a return engagement by William Shatner (left) with Brian Evans (right) and special guests Corky Gardner, Cool Hand Luke, Brian Michaels and King Martin. The performance will be at 7 p.m. Dec. 30 at the Historic Iao Theater in Wailuku. Tickets range from $98 to $206, with VIP meet-and-greet passes available for an additional $224. To purchase tickets, call 242-6969 or visit www.mauionstage.com.

By popular demand, the Maui Theatre presents the return of Seth Grabel. The Las Vegas-based magician will showcase his skills in magic and comedy with “Magic on Maui,” a family-friendly production created especially for the Maui Theatre.

Known for his performances on “America’s Got Talent,” Grabel’s illusions have dazzled audiences worldwide.

* Ongoing performances are at 5 p.m. Wednesdays and Sundays at the Maui Theatre in Lahaina. Tickets start at $49, or $24.50 for children 12 and younger, and are available by calling 856-7900 or visiting www.mauitheatre.com.

* Tickets range from $79.50 to $99.50 (plus applicable fees) and are available at the box office, by calling 242-7469 or online at www.mauiarts.org. This performance contains adult content and is not appropriate for children.

Comedian Rita Rudner is returning to Maui. Rudner is one of the most beloved Las Vegas performers in the tradition of Phyllis Diller, Joan Rivers and Don Rickles.

* The performance will be at 7 p.m. Jan. 7 in the McCoy Studio Theater at the MACC. Tickets range from $40 to $65 (plus applicable fees) and are available at the box office, by calling 242-7469 or online at www.mauiarts.org.

Felicetta and Horvath mix classic Rat Pack comedy banter along with the signature songs of Sinatra and Martin, performing in the roles they’ve been playing on Las Vegas stages for more than a decade.