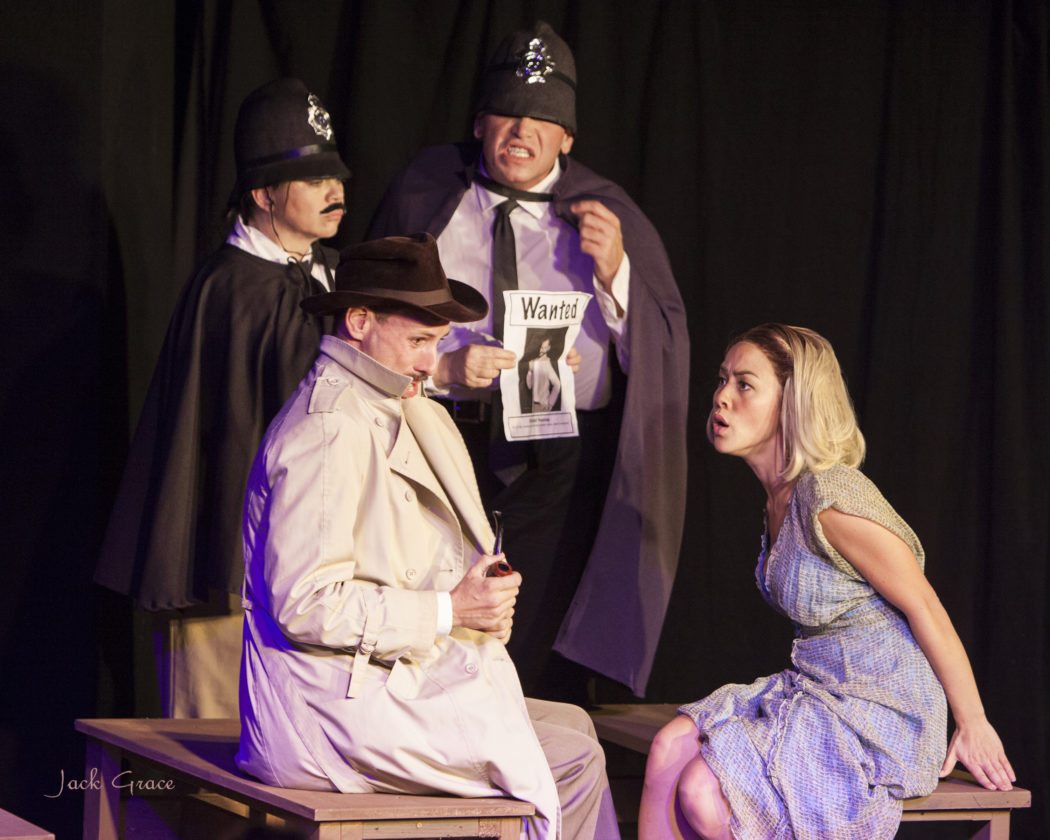 John Williams (clockwise from bottom left), Lina Krueger, Ross Young and Patty Lee juggle multiple roles in ProArts Playhouse’s “The 39 Steps.” Performances are at 7:30 p.m. Thursdays through Saturdays and 3 p.m. Sundays through March 25 at the ProArts Playhouse in Kihei. Tickets are $26. For more information or to purchase tickets, call 463-6550 or visit www.proartsmaui.com. • Jack Grace photo

What makes us laugh? Great comedy does not require a preface, or in some rare cases, exceptional writing. It requires execution by great comics. That is exactly what is happening at the ProArts Playhouse in Kihei over the next three weeks, because “The 39 Steps” is absolutely loaded with talent.

The only unhurried chapter of “The 39 Steps” is the brief exposition categorizing Williams’ Hannay as a humdrum Canadian living a rather unexciting life in London.

After deciding that an evening of mindless theater will cure Hannay’s boredom, this screwball comedy is off to the races. The true clowns of the play are Krueger and Young, armed with more ridiculous personas and outrageous accents than Monty Python. Lee whimsically portrays three ingenues opposite Williams’ straight man.

The first is Annabella Schmidt, a foreign spy who entangles Hannay into an espionage adventure. When she is murdered in his apartment, Hannay must carry out her mission and heads to Scotland to crack a secret code dubbed, “The 39 Steps.”

The next scene, set on a train, is perhaps the funniest stage scene of the season. Benches, hats and props are all that is required to convey nearly a dozen characters, mostly played by Krueger and Young who switch from one to another in split seconds, ending in a chase scene on top of the imaginary train. Parodies of several famous Alfred Hitchcock movie scenes pepper the entire production, including a hysterical send-up of “North By Northwest” with the aid of a model airplane on a stick. The props by Jet Bee George only aid the hilarity of “The 39 Steps,” as do moments of improvisation and breaking the fourth wall. Several sound cues are purposely late or poorly-timed, allowing Krueger and Young to voice their annoyance at sound engineer Rochelle Dunning.

My guess is that one could see “The 39 Steps” several times and never see the same show twice. Amidst one scene-change frenzy last weekend, Young adlibbed, “Hurry up and close that. It’s hiding the set from the last show.”

A cardinal rule in stage comedy for performers is if you’re not having fun, neither will the audience. Exceptional blocking and casting by director Kristi Scott have made “The 39 Steps” a truly brilliant production, but it appears that Williams, Lee, Kruger and Young are not just having fun — they’re having the time of their lives.

The Maui Arts and Cultural Center in Kahului presents “Mai Po’ina: The Annexation Debates.” In 1898, Hawaii was annexed by the United States in an unorthodox and controversial manner. This production is a reenactment of the debate, as ripped from the pages of Hawaii’s recent past. A discussion with Hawaiian scholars follows the performance.

• Performance at 7:30 p.m. Saturday in the McCoy Studio Theater at the MACC. Tickets are $28 for adults and $14 for children 12 and under (plus applicable fees). To purchase tickets for any MACC event, visit the box office, call 242-7469 or order online at www.mauiarts.org.

Baldwin Theatre Guild concludes “Once Upon a Mattress,” music by Mary Rodgers, lyrics by Marshall Barer, book by Jay Thompson, Dean Fuller and Marshall Barer, based on Hans Christian Anderson’s “The Princess and the Pea.” The local youth production is directed by Linda Carnevale, choreographed by Dejah Padon, under the musical direction of Tana Larson and conducted by Stephen Rodrigues.

• Performances are at 7 p.m. Friday and Saturday, and 2 p.m. Saturday and Sunday in the auditorium on the H.P. Baldwin High School campus in Wailuku. Tickets are $12 for adults, $10 for seniors, $7 for youth ages 12 to 17 and $5 for ages 11 and under and are available at the box office 45 minutes before showtime.

Maui OnStage Youth Theater presents “Disney’s Winnie the Pooh Kids,” directed by Jessica Nelson. Based on the characters of A.A. Milne, this children’s production features songs from the Disney animated film as well as new songs by Robert and Kristen Lopez (“Frozen”).

• Performances are at 11 a.m. Saturdays and 1 p.m. Sundays through March 18 at the Historic Iao Theater in Wailuku. Tickets are $10 for adults and $6 for children. To purchase tickets for any Iao Theater event, call 242-6969 or order online at www.mauionstage.com.

• Performance is at 6:30 p.m. Monday at the Historic Iao Theater. The free ONO! performances are every second Monday of the month.