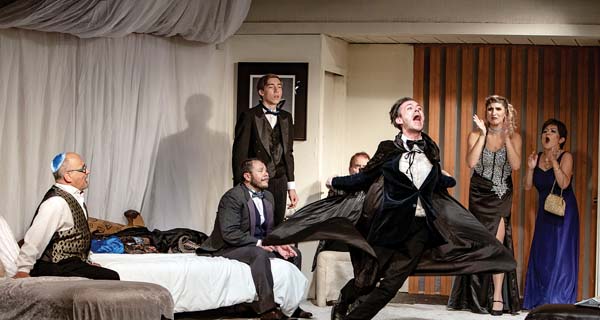 From the top of “It’s Only A Play,” audiences realize that a wild night is in store for them at the ProArts Playhouse.

At a Broadway opening night party, the loveable and extraordinarily green, Gus P. Head (Elisha Cullins) has been hired to collect coats. This young, wannabe actor is optimistic that the famous guests will automatically discern his talents. Cullins comically gathers one outlandish coat after another ranging from Tommy Tune’s fur, to costume pieces from the casts of “The Lion King,” “Harry Potter” and “Hamilton.”

While the party happens downstairs, the seven characters of “It’s Only A Play” hide away in an upstairs bedroom, nervously waiting to find out the critical verdict on their show, “The Golden Egg.”

The stakes are high for Peter Austin (John Galvan), an optimistic jellyfish of a playwright whose career is on the line. Galvan plays his role with a childlike sense of wonder, seasoned with an underlying terror that his career may be in jeopardy.

Austin’s friend, James Wicker (David Belew), is a TV star who passed on the male lead in “Egg.” Belew adeptly executes playwright Terrence McNally’s malicious humor, and offers a duplicitous portrayal. If “Egg” is a hit, he will regret the decision, so Wicker is secretly hoping for a flop. 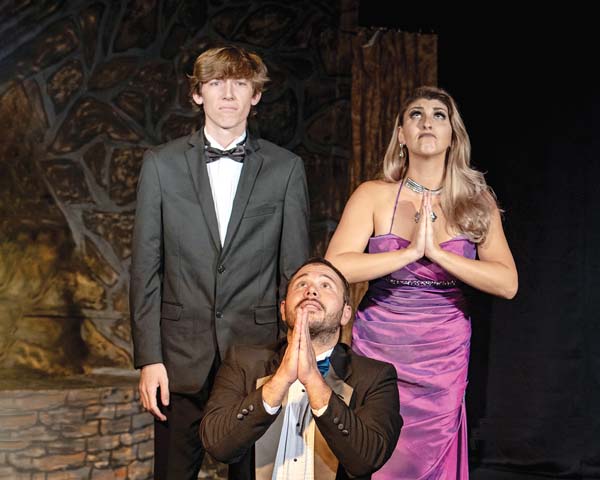 All characters in “It’s A Play” have a vested interest in the fate of “Egg,” especially Julia Budder (Sharleen Lagattuta) who has sunk a fortune into the show so she can receive solo producer credits. Lagattuta gives an exceptional performance as Budder, and at times carries the production with her realistic interpretation of a “ditzy trophy wife,” prone to misnomers, who is a competent businesswoman.

Frank Finger (Logan Heller) is the eccentric British director of “Egg.” Heller gives a triumphant performance, lifting this McNally comedy, which has received mixed reviews for decades, to its maximum potential whenever he is onstage.

The eagerly anticipated New York Times review finally arrives via smartphone in the second act. A scathing and lengthy review more than poaches “Egg,” which only amplifies the chaos of this angst-filled farce.

A barrage of cynical one-liners, emotional breakdowns and a “Defying Gravity” singalong follow, as Director Francis Taua goes for broke with the broadest of comedy, expansive physicality and extreme characterizations.

• ProArts continues “It’s Only A Play” by Terrence McNally, directed by Francis Taua. Performances are at 7:30 p.m. Thursdays through Saturdays, 3 p.m. Sundays through Jan. 27 at the ProArts Playhouse at Azeka Place Makai in Kihei. Tickets are $26. For tickets or more information for any ProArts event, call 463-6550 or visit www.proartsmaui.com. “It’s Only A Play” contains strong adult language.