Lightning in a bottle 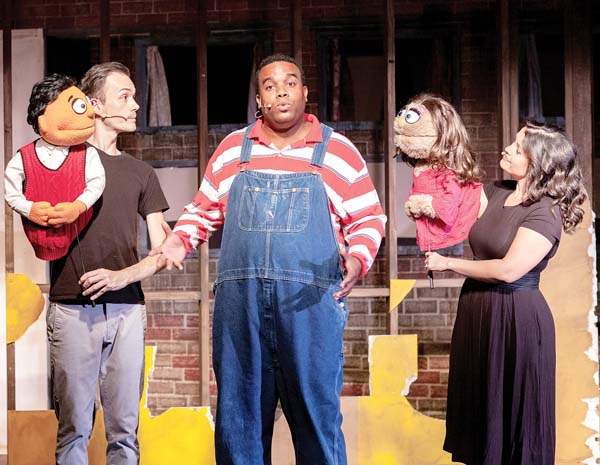 Puppet Princeton (from left), Logan Heller, Barron Burton, Puppet Kate Monster and Kathryn Holtkamp in ProArts’ “Avenue Q.” Performances are at 7:30 p.m. Thursdays through Saturdays and 3 p.m. Sundays through May 5 at the ProArts Playhouse in Azeka Shopping Center Makai in Kihei. Tickets are $26. For more information or to purchase tickets for any ProArts event, call 463-6550 or visit www.proartsmaui.com. Jack Grace photo

Every once in awhile Maui’s theater companies offer up something extraordinary. Past examples that come to mind are the Maui Academy of Performing Arts’ “Les Miserables” and Maui OnStage’s “Chicago.”

I call it lightning in a bottle. ProArts “Avenue Q” is a flawless work of genius on par with a national touring production. Masterfully helmed by Director David Belew and veteran professional “Avenue Q” Puppet Coach Stephie Garrett, this smash-hit production at the ProArts Playhouse in Kihei is the hottest ticket in town and the must-see show of the season.

“It’s one of those shows where the laughs start even before the lights come up, and they don’t stop until the end,” Belew shared two weeks ago in Backstage.

In reality, the smiles begin during the pre-show as nostalgic video creations by Ally Shore delight with excerpts from “H.R. Pufnstuf,” “Mr. Rogers’ Neighborhood,” “Schoolhouse Rock,” “Sesame Street,” “The Electric Company” and many more. 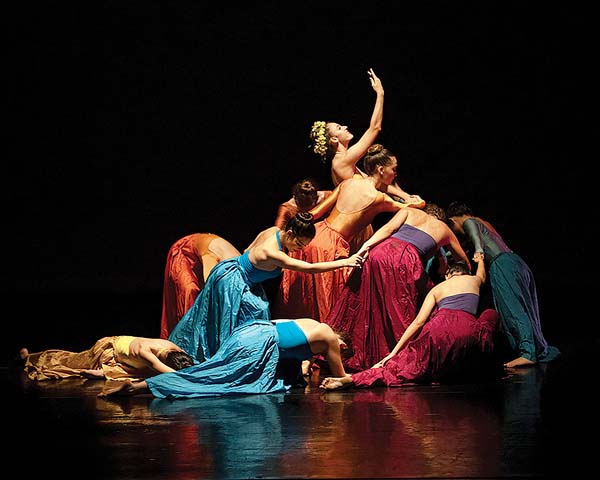 Leading the impeccable performances of this seven-person ensemble cast is Logan Heller, who voices both Princeton and Rod, and Kathryn Holtkamp, as Kate Monster and Lucy the Slut.

Heller’s loveable Princeton, a starry-eyed recent college graduate struggling to find his purpose is the newcomer to “Avenue Q.” After renting a Manhattan flat, where Gary Coleman (Barron Burton) is the superintendent, Princeton is immediately introduced to longtime single Kate by neighbor Christmas Eve (Lina Krueger). Both Burton and Krueger, along with Kiegan Otterson who plays Christmas Eve’s fiance, Brian, are human characters that interact with the puppets as if they were human too. They elicit recurring fits of laughter in embracing their racially stereotyped roles with appropriate over-the-top portrayals.

On “The More You Ruv Someone,” Krueger laments, “The more you ruv someone / the more you want to kill ’em. / Ruving and killing / fit like hand in glove!”

Otterson’s employment-challenged Brian imparts, “I’m not wearing underwear today,” to which Krueger exclaims, “Get a job!”

Holtkamp voices two distinctly contradictory puppets and frequently responds to herself. While Kate sweetly pines for Princeton, Lucy boasts in the song “Special,” “When we’re together / The earth will shake / And the stars will fall / Into the sea. / So come on, baby, / Let down your guard. / When your date’s in / The bathroom, / I’ll slip you my card.”

The hardest-working cast member is Marsi Smith, who in addition to playing Kate’s boss, Mrs. Thistletwat, stealthily maneuvers puppets throughout the show, becoming the animator when Holtkamp and Heller switch to take on a different puppet and voice.

The Bad Idea Bears (Smith and Shore) set up many of the most uproarious scenes in “Q” — like their suggestion to Princeton of getting Kate Monster “wasted” so he can have sex with her, followed by Burton’s serenade of, “You can be as loud as / The hell you want / When you’re making love.”

Shore triples in the production as the porn-addicted Trekkie Monster (think an R-rated Oscar the Grouch) and Nicky, roommate to Rod. Indicative of Bert and Ernie, Heller’s Rod is a deeply closeted gay Republican, to whom Shore melodically advises, “If you were gay / That’d be okay / I mean ’cause, hey / I’d like you anyway.”

ProArts asks on its “Avenue Q” poster, “What if ‘Sesame Street’ had the same attitude as ‘South Park?’ “ — a perfect summary for this irreverent musical comedy. It’s no coincidence that co-composer Robert Lopez went on to team up with “South Park” creators Trey Parker and Matt Stone on the equally successful “The Book of Mormon,” and those that enjoy that brand of humor will adore “Q.”

On Saturday night, Maui OnStage revealed the five productions scheduled for its 2019-20 season at Sneak Peek: 4900 Miles Off Broadway.

In September, MOS presents “The Graduate,” a stage adaptation of the 1960s comedy film about a disillusioned college grad, Benjamin Braddock, and his tempestuous affair with the older Mrs. Robinson.

The annual holiday family show, the Maui premiere of Roald Dahl’s “Matilda The Musical,” will open on Nov. 29.

In March, MOS presents “A Chorus Line,” a concept musical that explores the ambitions of Broadway gypsies filled with memorable songs such as “What I Did for Love” and “One.”

The season concludes with another Maui premiere, “Priscilla, Queen of the Desert.” This jukebox musical set in Australia follows the adventures of three drag queens whose tour bus breaks down in a small town. It features the dance hits, “It’s Raining Men,” “I Will Survive” and “Girls Just Wanna Have Fun.”

“Although it’s 30 years old, its issues are current — and perhaps even more relevant today,” says Ward.

” ‘Paper Trail’ explores the evolution of paper,” says Morissette, “from its invention to its use as a carrier of the written word, vehicle of commerce, ceremonial object and more.”

Choreographer and Ballet Teacher Vanessa Cerrito combines her ballet and jazz classes in a tribute to Prince.

“Prince played a huge part in my adolescence,” says Cerrito. “I feel honored and so inspired to share the music of such a prolific artist with our teenagers here at Seabury.”

“It’s exciting to return year after year and see the growth of these young dancers,” says Meghan Reyes. “Tito and I are thrilled to be a part of their development.”

“How exciting it is to see the development of the program over the last 30 years at Seabury,” reflected Ward. “The building of the new theater, the progress of the arts, the expansion of the guest artist program, the richness of the catalogue of past works to draw on [and] the freshness of the current work. How incredible it has been to be a part of this for the past 30 years!”

• Performances of “Dance Showcase 2019” are at 7 p.m. Saturday, 7 p.m. April 26 and 27 and 3 p.m. April 28 in the ‘A’ali’ikuhonua Creative Arts Center on the Seabury Hall campus in Makawao. Pre-sale tickets are $10 for adults, $8 for seniors and $3 for students. Ticket prices increase by $2 in all categories on day of event if purchased at the door. To purchase tickets for any Seabury Hall Performing Arts event, visit www.seaburyhall.org. 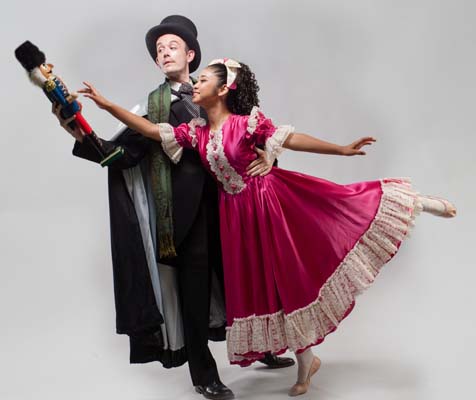