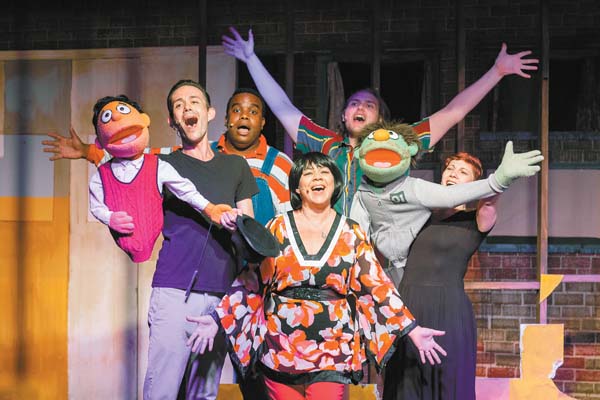 The Tony Awards, telecast Sunday, June 9 on CBS, is likely to be a night of surprises. The 2018-19 theater season featured no clear-cut hit show, a mere two musical revivals and a great many nominations for Broadway newcomers.

The musical categories are toss ups this year with “Hadestown,” a modern take on Greek mythology, leading the nominees with 14 nods. Other best musical nominees include “Ain’t Too Proud To Beg,” a jukebox musical of Temptations hits, “Beetlejuice,” “Tootsie” and “The Prom,” an emerging sentimental favorite with the buzz.

Written by Matthew Sklar, Chad Beguelin and Bob Martin (the creators of “Elf”), and directed and choreographed by Casey Nicholaw (“The Book of Mormon”), “The Prom” follows four declining Broadway stars to a small Indiana town in an attempt to resurrect their careers by bringing national attention upon a lesbian couple prohibited from attending their high school prom.

Originally written off as a flop in November, the little musical-comedy-that-could survived just long enough to find the audience to match its critical praise. With newcomer co-leads Caitlin Kinnunen and Beth Leavel nominated against each other for “The Prom” the votes may split, allowing three-time nominee Stephanie J. Block to take home her first Tony for her performance as Cher in “The Cher Show.”

Aaron Sorkin’s successful new adaption of “To Kill a Mockingbird,” in which adults play the children, garnered nine nominations, but not for best play. Author of the Academy Award-winning “Midnight,” Tarell Alvin McCraney could surprise with his Broadway debut, “Choir Boy,” but past history suggests that although Oscar winners are frequently nominated for Tonys, they rarely win. 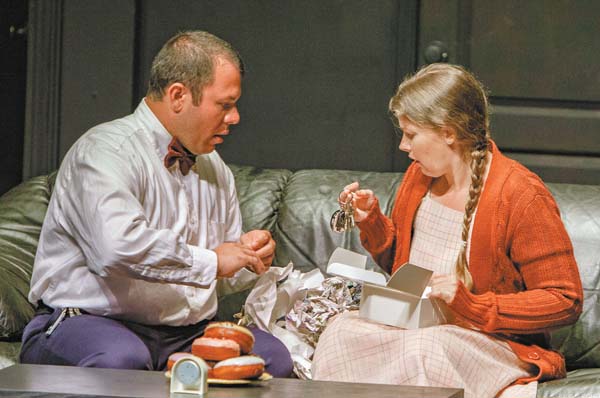 John Galvan (left) and Leighanna Locke were Outstanding Actor and Actress in a Featured Role in a Play for their work in Maui OnStage’s “The Boys Next Door.” Jack Grace photo

The Sam Mendes-directed “The Ferryman,” an edgy dramatic thriller about a former Irish Republican Army agent, also with nine nominations, is the likely favorite.

If there is a shoo-in this year, it would be the Broadway return of Elaine May as best actress for her performance as an octogenarian battling Alzheimer’s in “The Waverly Gallery.” Though in nomination against Annette Bening for “All My Sons,” and two-time Tony winner Laurie Metcalf for “Hillary and Clinton,” May is another sentimental favorite.

The best actor in a play category is equally loaded with the well-known Bryan Cranston as Howard Beale in “Network,” Jeff Daniels as Atticus Finch in “To Kill a Mockingbird,” as well as Adam Driver’s performance in “Burn This” all making headlines, but do not be surprised if youthful newcomer Jeremy Pope steals this award for “Choir Boy.” The previously unknown Pope could pull off something that has never been done before — winning two acting Tonys in one night, as he is also in nomination as featured actor in a musical for “Ain’t Too Proud To Beg.”

Following the same format as the American Theatre Wing, I annually recognize Maui’s volunteer actors and my favorite performances. If the 2018-19 Maui theater season had a theme, it was just as murky as Broadway’s, on the darker side, with only a smattering of musical-comedies and very few household name productions. 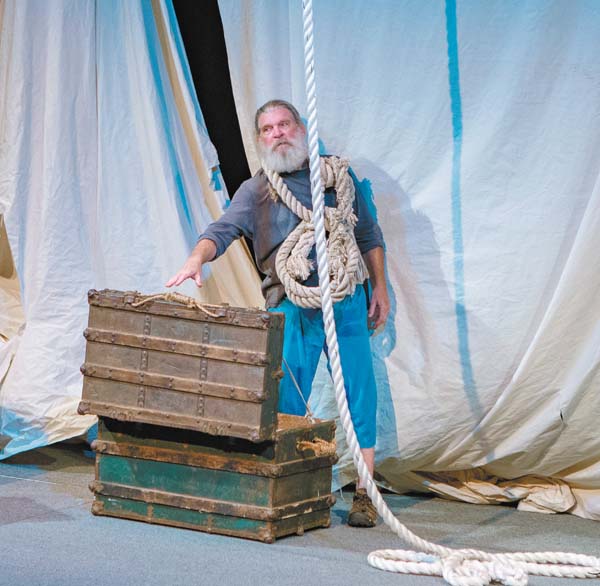 Frank Kane won Outstanding Actor in a Leading Role in a Play for his solo performance in Oh Boy! Productions’ “Albatross,” which also won for “Outstanding Play.” Jack Grace photo

Outstanding actress in a featured role in a play

My choice for outstanding actress in a featured role in a play is Leighanna Locke as Sheila in “The Boys Next Door.” Locke offered three outstanding performances in 2018-19, but her Sheila was the most momentous. Sheila was so authentic that I felt as if she was a friend of mine, someone I had met that left an indelible impression on me. Without her performance, “The Boys Next Door” simply wouldn’t have worked as well. Known primarily for her leading roles in large musicals, this equally impressive other side of Locke’s work will hopefully lead to more appearances in character roles.

Outstanding actor in a featured role in a play

For outstanding actor in a featured role in a play, I chose John Galvan for his multi-layered portrayal of the lovable Norman in “The Boy’s Next Door.” Though challenged with Norman’s physical and mental barriers, Galvan’s work resonated deeply with audiences. In many ways, this was a dual award — I could not separate Norman from Sheila. These two actors fed off each other’s stage work, gifted the actor’s art of listening to themselves and rose together as a result of that collaboration. 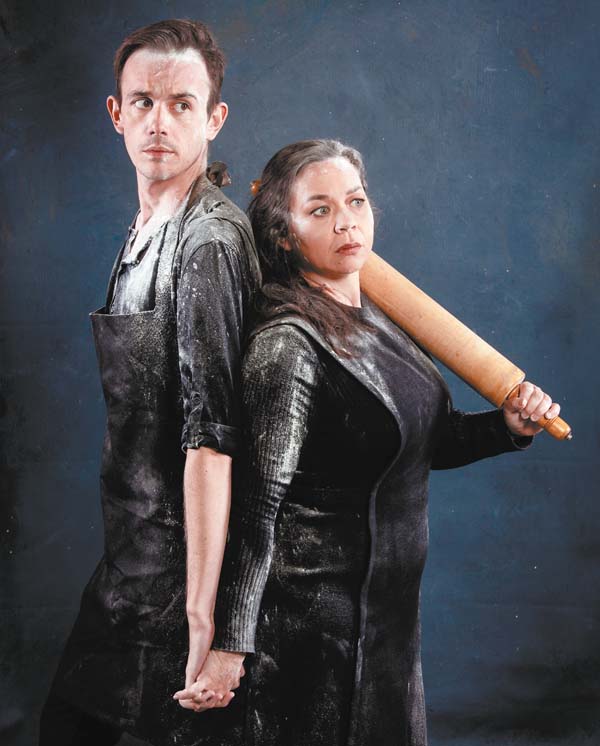 Outstanding actress in a featured role in a musical

For outstanding actress in a featured role in a musical, my choice is Marsi Smith as Ruth in “The Pirates of Penzance.” Smith was the hardest working actor on Maui this season, and like Locke, offered more than one award-worthy performance. Her grounded, Actor’s Equity level performance as Ruth not only showcased her outstanding abilities as a solo singer and comedian, but also her attentive believability amidst the absurdity of “Pirates.”

Outstanding actor in a featured role in a musical 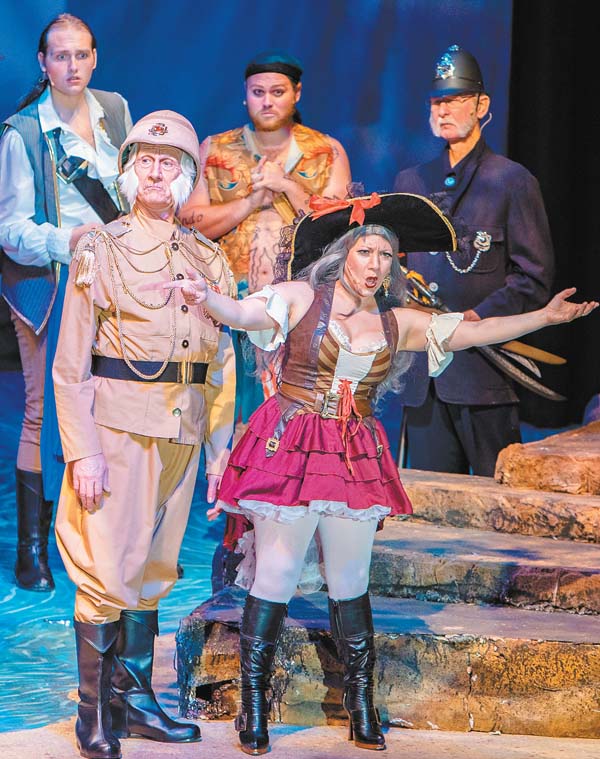 My choice for outstanding actor in a featured role in a musical is Dale Button in “The Pirates of Penzance.” Button wowed in “Pirates,” generating thunderous applause not once but twice, within his magnificent performance of “I Am the Very Model of a Modern Major-General.” Like Smith, Button supplied many laughs as the excitable Major-General Stanley with initial childlike elation followed by subtle condescension.

Outstanding actress in a leading role in a play

As outstanding actress in a leading role in a play I choose Lin McEwan as Mary in “Vindication: Scenes from the life of Mary Wollstonecraft.” The production co-produced by McEwan and ProArts, was also written by McEwan.

In November I suggested that great theater should enlighten and educate its audience — “Vindication” was one of the best examples of great theater this season. McEwan’s all-encompassing endeavors were impressive, but her performance as Wollstonecraft was a masterpiece. 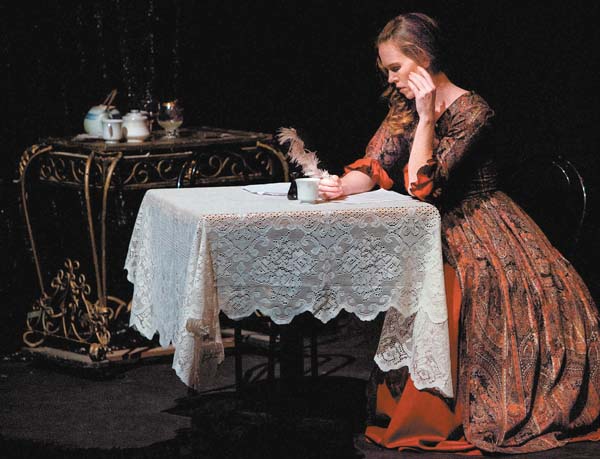 Outstanding actor in a leading role in a play

For outstanding actor in a leading role in a play, I chose Frank Kane in “Albatross.” Kane delivered a bravura performance as The Ancient Mariner — and conceivably the outstanding performance of the decade.

The brilliant script by Matthew Spangler and Benjamin Evett certainly allowed for a great actor to shine, but Oh Boy! Productions had to find the actor that could mesmerize all alone on stage for an entire evening. Deeply rooted in character, Kane deftly navigated the ever-changing moods of the Mariner, while facilitating his own set changes, prop placement, hoisting the sails of the ship, swabbing the deck and hanging the deceased albatross around his neck in penance.

Outstanding actress in a leading role in a musical

For outstanding actress in a leading role in a musical, I picked Lina Krueger as the Baker’s Wife for “Into the Woods.” Krueger championed the humor of this role, and delivered the best belly laugh of the season with her perfectly delivered, “What the hell was that,” when discarded by a prince following an extramarital tryst in the woods. The power of Krueger’s performance was in nimbly shifting from physical and verbal comedy to sublime scenes like her “Moments In the Woods” solo.

Outstanding actor in a leading role in a musical

I choose Logan Heller, as the Baker from “Into the Woods,” for outstanding actor in a leading role in a musical. Heller’s subjugated Baker could have easily gone overlooked while surrounded by outlandish depictions of fairy tale favorites, yet his decency illuminated throughout the lavish production. Be it the tolerance he displayed towards the needy Little Red, his guilt in tricking Jack with magic beans, his concern for Cinderella’s well being or his bravery against the Giantess, Heller embodied stage likability. His Baker evolved spiritually throughout the show, best displayed vividly in song on “Any Moment” and “No More.”

My pick for the outstanding play is “Albatross.” In reviewing this stupendous production nine months ago, I stated that the play fell in limbo between two seasons, but had set the bar in excellence for 2018-19. Enhanced by gorgeous design, Kane’s performanceand masterfully directed by Jennifer Rose, “Albatross” was not exceeded. Producer Vinnie Linares had the foresight to surround himself with a perfect artistic team to present this flawless, Broadway-worthy production of the year.

For outstanding musical, my choice is “Avenue Q.” In the slang-style of “Avenue Q,” this pick was a no-brainer. Last month I called it lightning-in-a-bottle — and if you missed it, you missed out. Director David Belew, alongside veteran “Avenue Q” puppet coach Stephie Garrett, delivered unblemished perfection the equal to a national touring production. This ProArts ensemble piece had no traditional starring roles — instead they had the perfect company of players that appeared to be having a ball playing in the best Maui musical I’ve seen in many years.