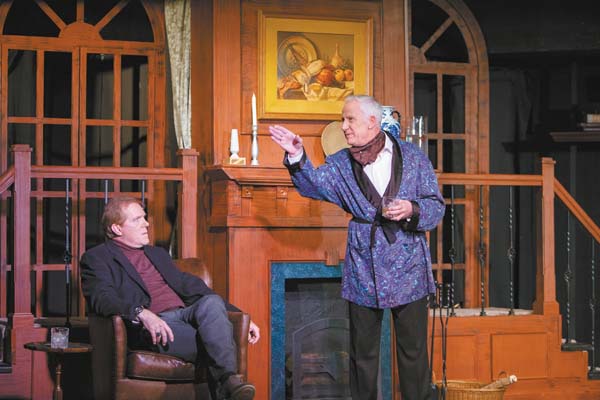 Brian Connolly (left, both photos) and Dale Button continue their cat-and-mouse games in ProArts production of “Sleuth” by Anthony Shaffer, directed by Jason Strahn. Performances are at 7:30 p.m. Thursdays through Saturdays and 3 p.m. Sundays, through June 23 at the ProArts Playhouse in Azeka Shopping Center Makai in Kihei. Tickets are $26. For more information or to purchase tickets for any ProArts event, call 463-6550 or visit www.proartsmaui.com.

Suspense classics are tricky to stage live. A clever script can only take you so far.

Audiences must be transported to a place of believability, they must be surprised, but most importantly they must be captivated.

“Sleuth,” which opened last weekend at the ProArts Playhouse in Kihei, accomplishes all of these feats and plays out as an action-packed, thrilling guilty pleasure.

Heavily layered with rich contributions, what appears to be effortless, composed performances by its exceptionally experienced co-leads Dale Button and Brian Connolly is what guides “Sleuth” from being merely engaging to a piece that signifies utmost precision. Without their acting skills and stage instincts, “Sleuth” would not have sustained the suspense necessary to engage. 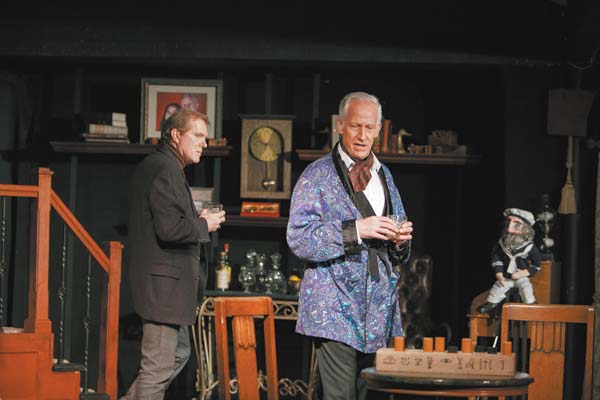 Brian Connolly and Dale Button in ProArts production of “Sleuth.”

Button plays Andrew Wyke, an eccentric British mystery author and avid game-player whose fictional Detective Merridew has allowed him to amass significant wealth. Brian Connolly’s Milo Tindle, a modest travel agent, has been invited to Wyke’s country estate and is immediately confronted on an affair between Tindle and Andrew’s wife (never seen).

Button’s impeccable portrait of the wily writer establishes Wyke’s wit and obsession with games early on as he commands the stage with his elocution and deviousness. In addition, Button champions a vast amount of lines rarely expected of a Maui actor.

Connolly’s understated, deadpan reaction as Tindle to Wyke’s eccentricities generate the essential elements for suspense, but it is Tindle’s arc and evolution into an equally commanding stage adversary that provides extreme intrigue.

It must also be recognized that quality British accents presented on Maui stages can be problematic and inconsistent. “Sleuth’s” director, Jason Strahn, wisely cast two of the most consistently strong accent-mastering actors. Be it Button’s recent work in “The Pirates of Penzance,” or Connolly’s past stage work in “A Christmas Carol” and “Scrooge,” English authenticity is a strength of this production, not a distraction.

At first, Tindle appears timid and surprised to discover that Wyke is more than happy to be rid of his wife, and he is easily ensnared into a treacherous web and peculiar plan — a fake jewel heist that will land Tindle 90,000 British pounds and Wyke a robust insurance settlement. 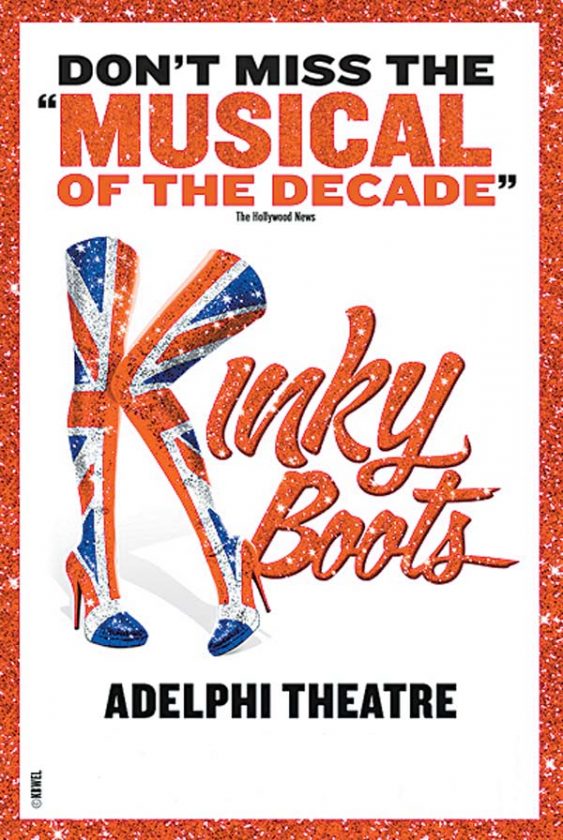 And so the game of “Sleuth” begins as twists and turns unfold throughout the fast-moving first act. Like an epic tennis battle, Wyke and Tindle land aces and advantage point and frequently reach match point only to return to deuce.

Initially over-matched, Tindle quickly becomes an avid player, adding much to Wyke’s tangled web of intrigue. By Act 2, matters are further complicated by the arrival of Inspector Doppler (Jack Whitworth), whose small town investigation threatens to end Wyke’s advantage and the game itself.

There are elements to author Anthony Shaffer’s play that are arguably dated. However, Shaffer’s intention with this nearly 50-year-old play was to parody 1930s Agatha Christie-esque parlor room murder mysteries.

The script is certainly wordy, and one might suggest plays such as “Sleuth” are no longer being written. Shaffer’s play is an intellectual challenge, layered with philosophical depth that could be categorized as existential. One could also argue that because plays like “Sleuth” are so uncommon in modern theater that the dated qualities are now, in fact, unique and nostalgic.

Increasing “Sleuth’s” enjoyment factor is its devotion to detailed artistic design. Ally Shore’s plush, two-level set suitably depicts an English country manor, teeming with superb dressing and props. This level of set quality that permeates off of the stage upon entrance to the theater is rarely matched, and as a result silently serves as an integral character.

Allowed to peer in on this private conflict, as if in the room, aided by the intimacy of ProArts Playhouse, the design is what makes this production so unique and makes it a theater experience worth talking about all summer.

Perhaps the most talked about aspect of “Sleuth” will be its multiple extraordinary stage special effects. Designed by both Shore and Daniel Vicars, these stage magic moments are the best executed tricks I’ve ever seen on Maui, and they will likely leave you asking, “How did they do that?”

In his debut, Strahn has directed a tour-de-force thriller that will leave audiences not just highly entertained, but educated on outstanding character technique by two of Maui’s finest actors. Additionally, Strahn’s sound choices in pace and blocking will keep audiences on the edge of their seats and surprised at how quickly “Sleuth” flies by.

Captured live on London’s Adelphi Theatre stage, the multi-award winning “Kinky Boots the Musical,” by Cyndi Lauper and Harvey Fierstein, will be presented by Fathom Events next week at Regal Maui Mall Megaplex in Kahului. Inspired by true events, “Kinky Boots” tells the story of two unexpected business partners that embrace their differences and create a line of stilettos unlike any the world has ever seen.

Reserved seats are $18.75 (plus applicable fees) and are available through www.fathom events.com.

Maui OnStage presents the Maui premiere of “Mamma Mia!,” by Benny Andersson and Bjorn Ulvaeus, directed and choreographed by Kalani Whitford, under the musical direction of Kim Vetterli. Set in a Greek island paradise, this jukebox musical tells the story of a young woman’s search for her birth father told through the pop hits of ABBA, including “Dancing Queen,” “SOS,” “Knowing Me, Knowing You,” “Take a Chance on Me” and its title track.

• Performances are at 7:30 p.m. Fridays and Saturdays and 3 p.m. Sundays, running July 12 through Aug. 4 at the Historic Iao Theater in Wailuku. Tickets are $20 to $40. To purchase tickets for any Iao Theater event, call 242-6969 or order online at www.mauionstage.com.

ProArts is seeking original plays written by local playwrights with plans to produce one or more locally written works in June 2020 to conclude its 2019-20 season. To be considered, scripts must be fully written at time of submission and 60 minutes in length or longer. Musicals will only be considered with original sheet music to which the author has the rights.

In addition, all plays must be written to conform to the ProArts Playhouse performance space and its production resources. Plays with small casts are preferred. Submit scripts in PDF form by email to proartsmaui@yahoo.com or mail a hard copy to ProArts Playhouse, 1215 S. Kihei Rd. #410 Kihei, HI 96753, Attn: Play Submission. The deadline for submissions is June 30. For more information, call 463-6550 or visit www.proartsmaui.com.

If accepted, the entry fee for three performances in the competitive category is $500. One-night-only performance entry is $200. To be considered for early entry in order to waive the Maui Fringe Theater Festival $20 submission fee, email your 60-minutes-or-less original one-act play to fringe@ mauionstage.com by Friday, Sept. 13.

Fringe productions in the competitive category will be judged by a panel of impartial jurors from the Maui theater community and will be eligible for cash prizes up to $500. All participating producers receive 50 percent of box office sales. The 10th annual Maui Fringe Theater Festival will take place from Friday, Jan. 24 through Sunday, Jan. 26 at the Historic Iao Theater. For complete rules, additional guidelines and an application, visit www.mauionstage.com.