Pop hits of ABBA will make you laugh, sing, cry and dance with Maui premiere 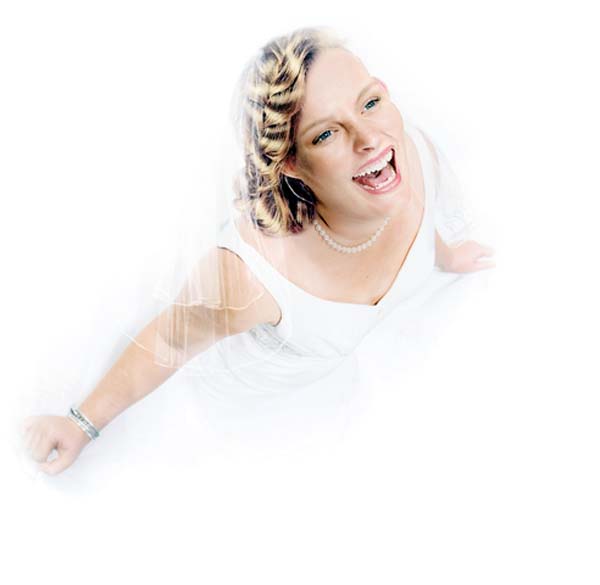 Julia Schwentor plays Sophie Sheridan in the Maui premiere of “Mamma Mia!,” music and lyrics by Benny Andersson and Bjorn Ulvaeus, book by Catherine Johnson, directed and choreographed by Kalani Whitford, under the musical direction of Kim Vetterli for Maui OnStage. Performances are at 7:30 p.m. Fridays and Saturdays and 3 p.m. Sundays, July 12 through Aug. 4 at the Historic Iao Theater in Wailuku. Tickets are $20 to $40. To purchase tickets for any Iao Theater event, call 242-6969 or order online at www.mauionstage.com. Brett Wulfson photo

To divulge a little honesty, when “Mamma Mia!” began its American warmup at San Francisco’s Orpheum Theater in 2000 before opening on Broadway, I happened to be in San Francisco for Thanksgiving. I saw the massive marquee and dismissively said to my cousin while walking down Market Street, ‘This is the chick-flick version of a musical,’ and passed on seeing it.

When it opened on Broadway, after being delayed by the events of Sept. 11, it was an instant hit. New York embraced the escape of this rom-com musical framed around the 1970s pop hits of ABBA, and its franchise has gone on to gross over two billion dollars over the past 20 years worldwide.

It wasn’t until I saw the Meryl Streep film version that I realized how incredibly wrong I had been that Thanksgiving weekend in 2000. Next weekend will be the first time I see “Mamma Mia!” live onstage at its Maui premiere at the Historic Iao Theater in Wailuku.

Set on the fictional Greek isle of Kalokairi in 1999, 20-year-old Sophie Sheridan (Julia Schwentor) is preparing to marry her fiance, Sky (Stephen Webb). She wants her father to walk her down the aisle, but there is a catch — Sophie doesn’t know who he is. 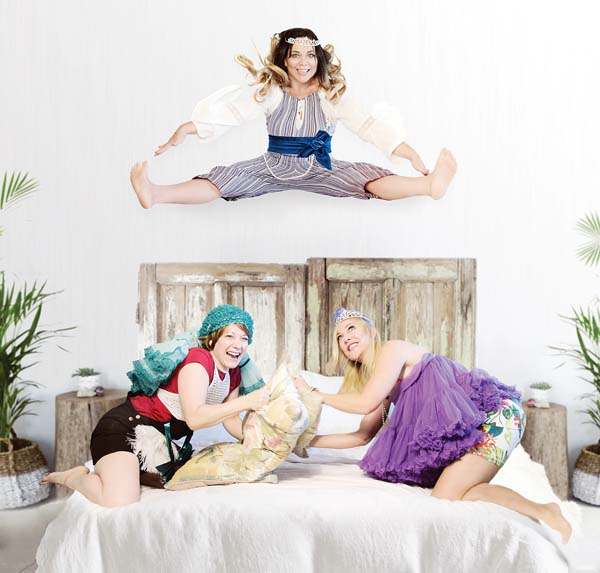 Lina Krueger (in the air) clowns around with pals Marsi Smith (from left) and Ellen Peterson. Brett Wulfson photo

The day before the nuptials, Donna begins receiving guests at her hotel and tavern. The first to arrive are her longtime besties and former “Donna and the Dynamos” bandmates, Tanya (Ellen Peterson) and Rosie (Marsi Smith).

Next up, the three possible dads arrive. Donna is shocked, to say the least, at the sight of her old flames and leaves in tears, convinced it will ruin everything. Rosie and Tanya do their best to cheer her up with an impromptu reunion performance of their 1970s band days.

Putting the talent of ABBA songwriters Benny Andersson and Bjorn Ulvaeus aside, the magic of “Mamma Mia!” — and in my opinion the primary reason for it’s astounding success — is due to Catherine Johnson’s superb book which reinvents the hits of ABBA as if they were, in fact, written for Johnston’s play and not the other way around.

When Donna’s exes arrive, the lyrics of “Mamma Mia” seamlessly fit the scenario: “I’ve been angry and sad about things that you do / I can’t count all the times that I’ve told you we’re through / And when you go, when you slam the door / I think you know that you won’t be away too long / You know that I’m not that strong.”

Another example is the loving scene when Tanya and Rosie console Donna as if the trio had never missed a beat in their friendship: “Chiquitita, tell me the truth / I’m a shoulder you can cry on / Your best friend, I’m the one you must rely on / You were always sure of yourself / Now I see you’ve broken a feather / I hope we can patch it up together.” 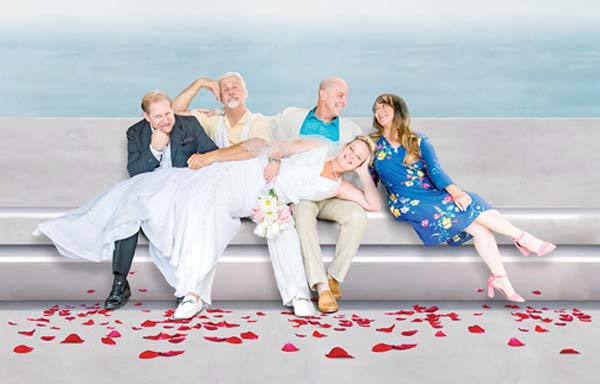 Combine Johnson’s writing with the infectious melodies and familiar lyrics of Andersson and Ulvaeus and you’ll understand why “Mamma Mia!” has become an international sensation that has audiences everywhere singing, laughing, crying and dancing out of the theater.

I visited with Krueger, Peterson and Marsi Smith last week, and they talked about sisterhood and the thought of best friends forever.

“The book is about the three women,” explained Peterson. “They anchor the show. It’s really a women’s story of friendship and their love for each other.”

“The friendship is a comfort for Donna, but [her] life situation as a single mother has removed [her] from them,” added Krueger. “The marriage of Sophie makes her realize that now Donna can start rekindling that sisterhood.”

“I feel like this is the first time in a longtime all three of us have the chance to recapture the fun and freedom of youth,” related Smith. “They really are three parts of the same person. They fit perfectly with each other, they can tell each other the hard truths, and they can make jokes out of something tragic that only a close friend can.” 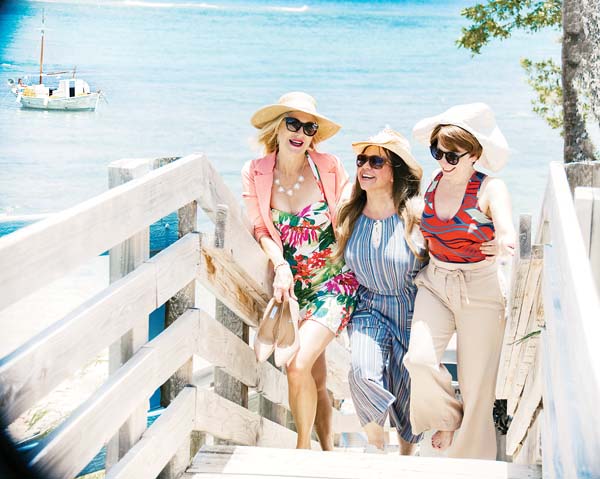 A unique aspect of Johnson’s book is the spin of a conventional rom-com while still being traditional.

“There are not a lot of shows where mature women get to strut their stuff,” expressed Peterson.

“It’s refreshing that three women are the focus — not three men — which is what we are used to,” agreed Director Kalani Whitford. “As a gay man, it is exciting to helm a story that champions women at its center with three men on the sidelines. Traditionally it is the other way around. It is all about lifelong friendship, a friendship that feels as if no time has passed and that is relatable to all audiences.”

I asked the talented trio why they auditioned for “Mamma Mia!”

“For one, the summer fun of it — but this show works so well as a cohesive piece. It’s a very heartfelt story, and what an amazing cast to be a part of this summer,” expressed Smith.

“I love ABBA, but I didn’t know how much until I saw ‘Mamma Mia!’ These are such nostalgic and iconic songs that take you back to special places and moments in your life. ABBA simply writes songs that capture moments,” added Krueger.

“It seemed like it would be fun to do, and at my age what an opportunity. It is refreshing that a musical like this even exists for women,” added Peterson. “When I was a little girl, my sisters and I would rock out to ABBA with hairbrushes [as microphones], and when I got the part, the first people I called were my sisters.”

Of course I had to ask what their favorite ABBA songs were, and all replied with rapid fire succession:

” ‘The Winner Takes It All.’ It makes me cry every time Lina sings it,” said Peterson.

” ‘Our Last Summer.’ I love the lyrics and it speaks to me,” added Smith.

I asked why Maui audiences should see “Mamma Mia!”

“Because life sucks and this is fun,” Smith offered.

“It’s a Maui premiere, and whether or not you like ABBA, it will win you over,” said Whitford.

“You’ll walk out singing, and you’ll be happier this summer,” vowed Krueger.

Maui OnStage’s ONO! (One Night Only) series returns with a staged reading of “An Enemy of the People” by Henrik Ibsen, directed by Vinnie Linares.

• The performance is at 6:30 p.m. Monday, July 15 at the Historic Iao Theater. The free ONO! events happen every second Monday of the month. For more information, visit www.mauionstage.com.

ProArts will be holding auditions for “Strangers on a Train,” by Craig Warner, directed by Tina Kailiponi. All roles are open, with auditions scheduled from 6 to 9 p.m. Sunday, July 14 and Monday, July 15 at the ProArts Playhouse in Azeka Shopping Center Makai in Kihei. Actors will read from the script and sides, which will be available before the auditions. “Strangers on a Train” will run Sept. 13 through 29.

To reserve an appointment, call 463-6550 or email proartsmaui@yahoo.com. For more information and a complete character list, visit www.proartsmaui.com.

Maui OnStage will be holding auditions for “The Graduate,” by Terry Johnson, directed by Rick Scheideman. All roles are open, with auditions scheduled in 10-minute increments from 5 to 9 p.m. Monday, Aug. 5 at the Historic Iao Theater. Actors should prepare a 1- to 2-minute contemporary monologue, bring a headshot (or recent photograph) and resume.

In addition, bring your personal calendar in order to list any possible conflicts during the rehearsal period (Aug. 9 through Sept. 26). “The Graduate” will run Sept. 27 through Oct. 13. To reserve an appointment or for more information and a complete character list, visit www.mauionstage.com.