‘Evil Dead: The Musical’ delivers a lot of bloody fun 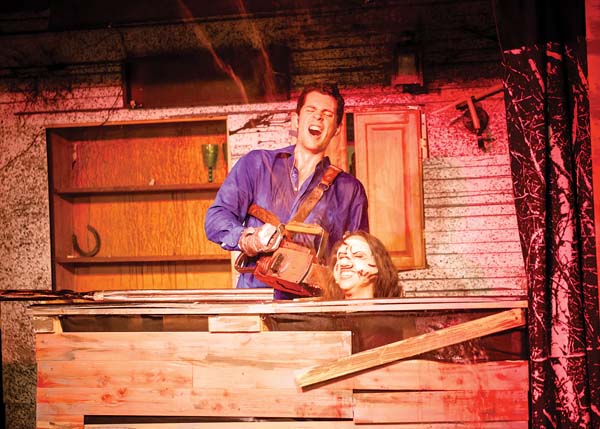 Jake Pecaut (left) and Felicia Chernicki-Wulf are shown in a scene from “Evil Dead: The Musical.” It continues this weekend and next at ProArts Playhouse in Kihei. PETER SWANZY photo

In Scotland, deep-fried Mars Bars are a must do, as are the deep-fried butter sticks at the Texas State Fair, despite their contributions to your eventual death. Though a little lowbrow and perhaps trashy, if any show is a must do this season, it’s “Evil Dead: The Musical” at the ProArts Playhouse in Kihei.

“Evil Dead” is arguably the “Rocky Horror” of the 21st-century, but loaded with twice the camp. It all begins with “Cabin In The Woods,” as the cast sings, “We’re five college students on our way to an old abandoned cabin in the woods/This trip will be wacky fun/A week of drinking/And premarital sex.”

The talented ensemble of nine perfectly portray their cartoonish, formulaic horror characters. Jake Pecaut as Ash, the heroic leader; Felicia Chernicki-Wulf as Linda, his perfect girlfriend; Patty Lee Sylva as Cheryl, his nerdy little sister; William Nil as Scott, the rowdy sidekick, and Lia De Souza as Shelly, Scott’s bar floozy date. Joining them along the way are Laura Lee Cole as Annie, daughter of Professor Knowby (Don Carlson in voice over), discoverer of an ancient “Book of the Dead” now hidden in the cabin in the woods; Mikel Gosney as her meek boyfriend Tom, and Derek Nakagawa as “Good Old Reliable Jake.”

Nakagawa’s song is an “Evil Dead” highlight, as he sings of his many talents such as, “Sneak a dead hooker out your hotel room,” “Nailed all the chicks on ‘The View’ “ and being “The inspiration for the Shamrock Shake.” Cole also offers a memorable performance. A cross between “Scooby Doo” and a Mel Brooks character, she impresses with her command of the ridiculous, reminiscent of Susan Sarandon and Madeline Kahn.

What makes “Evil Dead” so much fun is that its entire cast goes all-in on embracing the stupid. This heightens to a frenzy with hysterical puppetry by Stephie Garrett and W. Pogsai Craft, and the multitude of special effect gags by Daniel Vicars and Jim Oxborrow. Then there is the blood, a lot of it, which spews and sprays all over the poncho-clad audience in the splash zone. As promised, director Kalani has delivered “a lot of bloody fun.”

* Roseox Productions and ProArts continue “Evil Dead: The Musical,” book, music and lyrics by George Reinblatt, directed by Kalani Whitford, under the musical direction of Marti Kluth. Performances are at 7:30 p.m. Thursdays through Saturdays, 3 p.m. Sunday through Nov. 3 at ProArts Playhouse in Kihei. There will be two performances at 7 and 10 p.m. on Halloween. Tickets are $30, and $40 for “splash zone” seating. “Evil Dead: The Musical” is restricted to audiences age 18 and over due to strong adult content. For more information or to purchase tickets for any ProArts event call 463-6550 or visit www.proartsmaui.com. 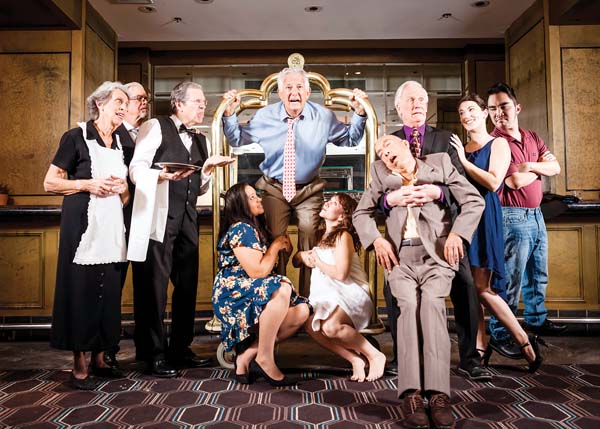