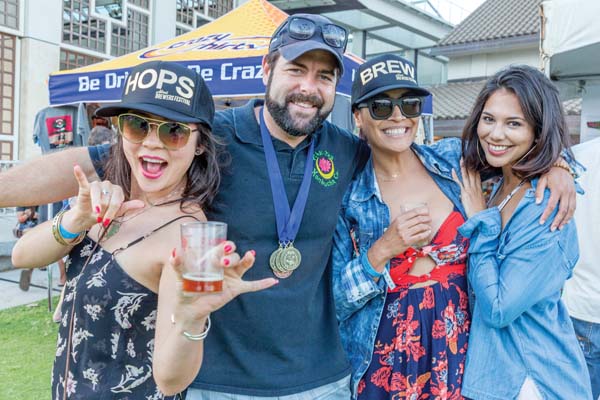 As usual, cold craft beer, island grinds and tons of fun will be the main ingredients on tap Saturday at the 10th annual Maui Brewers Festival. Spilling out over the A&B Amphitheater and under the Yokouchi Pavilion at the Maui Arts & Cultural Center in Kahului, it’s a beer bash and then some for those 21 and older.

For this year’s highly anticipated double-digit anniversary party, 45 breweries will pour 90 coveted craft selections, 20 Maui food vendors will cook up a storm of tasty pairings, auction items will benefit MACC programs and upbeat bands will get the crowd going.

“Hard to believe it’s been 10 years since we started the Maui Brewers Festival,” says founding presenting sponsor Garrett Marrero, CEO and president of Maui Brewing Co. with locations in Kihei, Kahana and Waikiki.”

“It’s grown to be one of the best beer festivals in the West,” he continues. “And it brings together many small and independent breweries with craft beer drinkers to celebrate. You’ll see some of your favorite beers and a bunch of new ones this year as well — alongside food by some of Maui’s finest restaurants.” 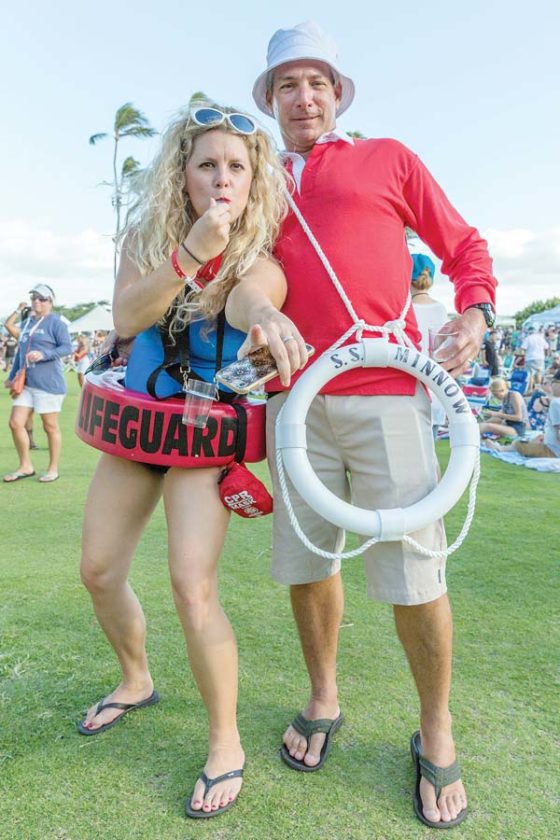 Of note is that Maui Brewing Co. just earned a Gold Award at the World Beer Cup (the most prestigious beer competition in the world) held on May 3 in Nashville for its Valley Isle ESB, which is a classic English-style pale ale in the “extra special bitter” category.

Also noteworthy is that Maui Brewing Co. restaurant and brewery in Kihei this week welcomed award-winning Chef Jojo Vasquez (formerly of the Plantation House in Kapalua) to be its executive chef. Big news, indeed. At the festival, Vasquez will wow with Maui Cattle Co. beef sliders as well as handmade veggie-patty sliders.

“I do everything based on the integrity of the ingredients and an eclectic method that uses as much fiercely local, sustainable avenues as I have,” shares Vasquez, who was Best Chef in 2017 in a local publication.

“This year’s 10th anniversary Maui Brewers Festival food offerings are sure to please!” says Lisa Haole, the MACC co-director of Food & Beverage. “New to the event will be Aloha Thai Fusion with signature Thai barbecued chicken and Da Nani Pirates will be sailing in with seared ahi wraps.”

Of course, many longtime food vendor supporters will be back to support the cause. 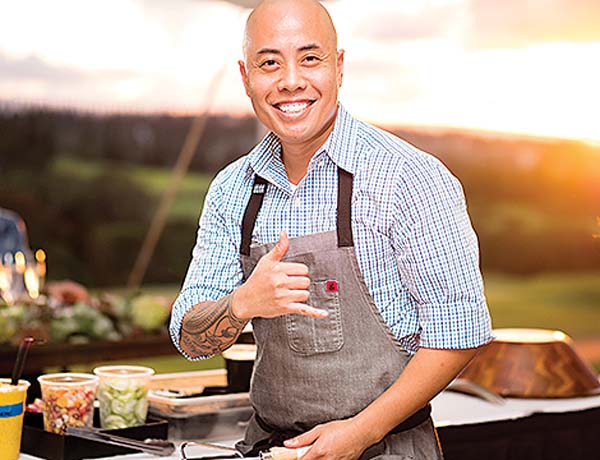 “Guests may again savor a variety of Outrigger Pizza Co.’s wood-fired pizzas,” Haole continues. “Like Poke…? is bringing its spicy smoked tako and tako poke and Shaka Pops will return with its popular ‘beersicles,’ while Three’s Bar & Grill will serve its kalua-pork quesadillas, to name just a few. And Chef Carl Yeh of Shearwater Tavern (voted the Best New Restaurant on Maui in the 2017 Best of Maui contest in The Maui News ) will be preparing a pigs-head ragu served over jalapeno grit cake with giardiniera –so come early and ‘tap’ into some great grinds at this year’s festival.”

But the food and beer parade doesn’t stop there. Do bring your appetites and thirsts. Walk around to the various booths, talk story, sip, grab food plates and sit down on a blanket or low-back beach chair that you may bring yourself. Brigit & Bernard’s Garden Cafe will entice with Hungarian goulash. Teddy’s Bigger Burgers will do extra crispy fries. Smoke & Spice will lure you in with brisket burnt-end chili. Star Anise will go exotic with coconut vegetable curry. Kumu Farms will also offer healthy options with organic papaya salad with almonds, corn and mint.

“Every year I have so many favorites, and I always like to see how our food vendors match their offerings so well with beer,” says MACC Food & Beverage co-manager Luana Argel.

“You can’t beat the combination of Mulligans on the Blue’s fish ‘n’ chips and beer,” Argel continues. “And AK Cafe’s pork or veggie lumpia, Sumo Dogs’ Sumo Pups and Pascual’s pork sliders paired with cold beer. Awesome food, tasty beer and great live entertainment … sounds like a fun afternoon to me! Come and celebrate the 10th anniversary of the Maui Brewers Festival with us.” 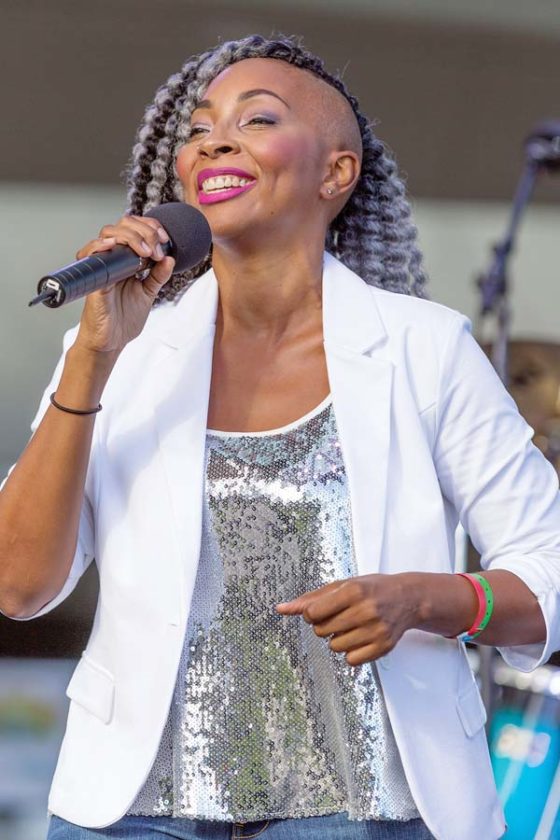 This year, Hawaii craft brewers have been carefully selected because of commitments to making craft beer with emphasis on quality, flavor and locally sourced ingredients. These and Mainland breweries will offer tastings of rare beer during the event’s VIP Tastings period from 2 to 3:30 pm.

“Garrett Marrero, along with Sierra Nevada, have been our unwavering sponsors from the beginning, and we are so grateful to them. We’re so honored to be reaching the 10th anniversary for our Maui Brewers Festival MACC fundraiser. This event has provided vital support for our organization, and each year we look forward to seeing beer lovers in the community come out and enjoy it. And even non-beer drinkers will find 11 hard ciders plus Vitali-Tea kombucha, coffee, water and the popular Maui Brewing Co. root beer.”

In all — there is a lot to get excited about.

“This year, there’s so much to look forward to,” says Humphrey. “We have the most breweries ever participating — 45 in all and 14 from Hawaii, which is nearly every brewer in the islands. We welcome this year’s Hawaii first timers Paradise Ciders and Ola Brewing Co., plus four brand-new breweries from the Mainland.”

Attendees will also be able to get their fill of fun desserts, too. Head to Vasi’s Catering booth to dip fresh strawberries, cookies, pretzels, marshmallows and potato chips into a chocolate fountain. And circle over to The Maui Cookie Lady’s booth for grown-up S’mores and Pog.

“This festival combines the best in food, beer and entertainment,” concludes Humphrey. “We’ve got a great live music lineup that includes Yum Yum Beast and returning this year are Riddum Station and Shea Butter & The Cream. There are a number of prize giveaways from the MACC and also from this year’s participating breweries.”

Maui Brewers Festival at a glance:

• Where: Outdoors at the Maui Arts & Cultural Center’s A&B Amphitheater in Kahului. Proceeds from this annual fundraiser benefit MACC programs for students, teacher and seniors.

• VIP admission: Get in early at 2 p.m. Saturday. Cost of $120 per adult includes 10, 4-ounce pours including rare beers, a handy beer-caddy lanyard, parking and live music.