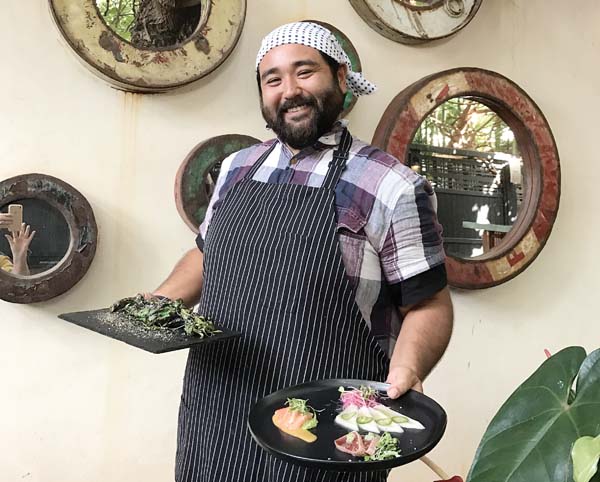 Smack dab in the middle of all of the tourist, surfer and hippie-dippie hustle and bustle in Paia is a new restaurant gem — hidden right in plain sight.

Vana makes you wanna eat there — and you can do so in casual clothes while dining fine in a garden setting on everything from lox and eggs with white truffle oil and creme fraiche to hanger steak in kombu red wine jus with miso butter and kale to vegetarian gnocchi that is potent with farm-fresh foods and flavor.

The little 49-seat powerhouse of a North Shore restaurant is in the former Paia Inn Cafe at the Paia Inn on Hana Highway. It was rebranded as Vana in January. Just walk past the singles dining counter and enter the Garden of Eatin’ oasis under the shade of a hau bush with a dining area, chef’s table with eight seats and beautiful and exotic quartz-like slab of a Jade Bar.

“The inspiration behind Vana comes from our appreciation of Japanese cuisine and uni, or sea urchin,” says Paia Inn owner Michael Baskin. 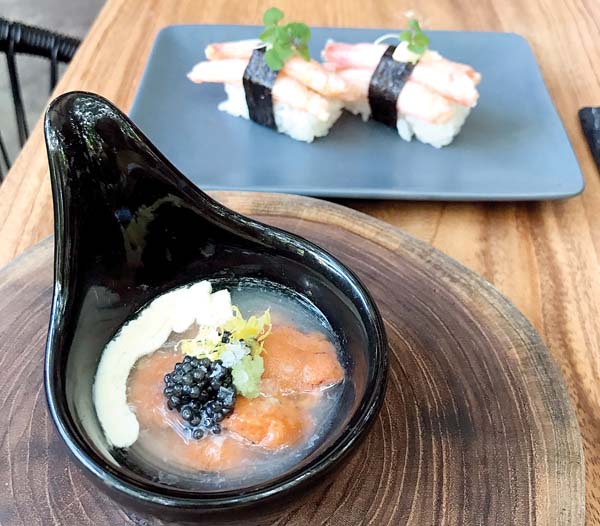 “I was concerned people wouldn’t be able to pronounce it properly, so we called our new concept, Vana. We didn’t wanna be Wana,” jokes Baskin.

“The new brunch and dinner menus have been big hits with our Paia Inn guests as well as with local residents who crave a fun and flavorful dining experience.”

Vana has two sushi chefs, including lead fish master Sean Ikeda, and new hire Shin Kim from Korea. Ikeda is from Boston and his father is from Oahu, so he traveled to Hawaii a lot as a kid.

Ikeda says that he’s faithful to Japanese techniques while utilizing an uninhibited approach to flavor. 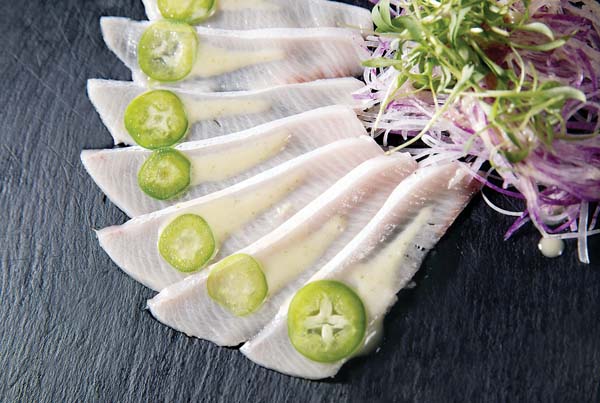 “I honor the taste of the fish, not masking it, while showing the multitude of things that can be done with it. One of my prides and joys is the Vana Spoon.”

Paying homage to the Vana’s namesake, this is a seafood elixir of the gods with fresh and silky-smooth sea urchin topped with caviar in a thickened dashi with real wasabi, yuzu, wine and lime.

“We import the wasabi from Japan, it’s frozen and packaged there. It’s the real thing,” says Ikeda, who is also pretty proud of his sake tiradito.

“It’s an international journey combining Japanese and Peruvian tastes. Peru has one of the largest Japanese populations outside of Japan. It has salmon, avocado, micro cilantro, ahi amarillo and leche de tigre in the dish.”

“We are very happy to have found Sean,” says Baskin. “His flavor profiles are very sensitive. He nails it in bringing the flavors together in subtle ways.” 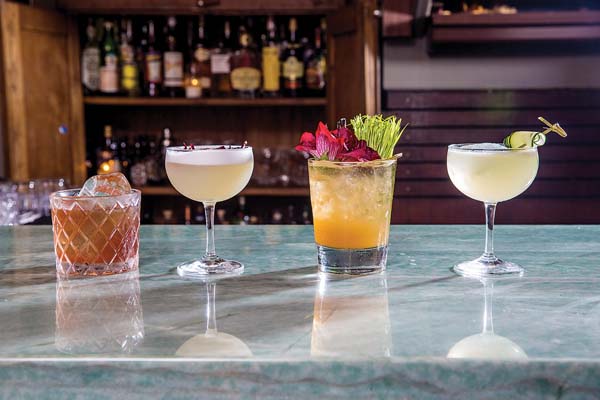 Cocktail range from the Shiso Lovely to the Jungle Bird. Paia Inn photo

Baskin also boasts an executive chef, a mixologist and a sommelier in this small, dining fine establishment.

Growing up in the hotel and restaurant business in the Caribbean, Baskin says he moved to Maui when he was 14 years old and lived in Paia.

“My family had small boutique hotels in the Caribbean. We lived in the Dominican Republic, Grenada, British Virgin Islands and Haiti as well. Their hotels were called ‘Baskin In the Sun.’ All of my friends were the staff. We played Dominos. That’s where I learned to speak Spanish.”

When Baskin moved to Maui, his mother ran the smoothie stand that fronted Charley’s Restaurant & Saloon back in 1977.

“I graduated from Seabury Hall in 1981 and then went to Pepperdine in Southern California and eventually became a designer and architectural contractor.” 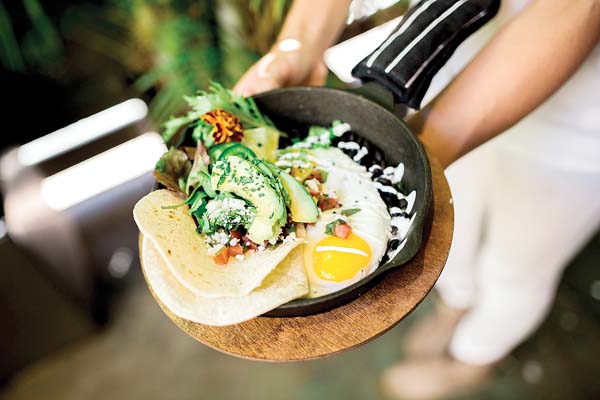 When he moved back to Maui as an adult, he bought the Paia Inn and other properties in town. The inn as well as the restaurant is influenced by Hawaii, Bali and Thailand with style elements of copper pipes, wood and bamboo.

At Vana, diners sit under the shade of an enormous hau bush in good weather and are protected under canvas shade awnings when it’s wet outside.

“We’re trying to build our brand around seafood and sushi and work closely with Maui farmers and fishers. We attempt to be as organic as possible.”

Vana is open for brunch from 8 a.m. to 2 p.m. daily, and dinner and happy hour start at 5 p.m. Wednesdays to Sundays. On March 1, dinner will be served seven nights a week.

Executive Chef Nick Gerstmar has been at the inn for three years, moving here from Oregon, where he ran a successful French restaurant. 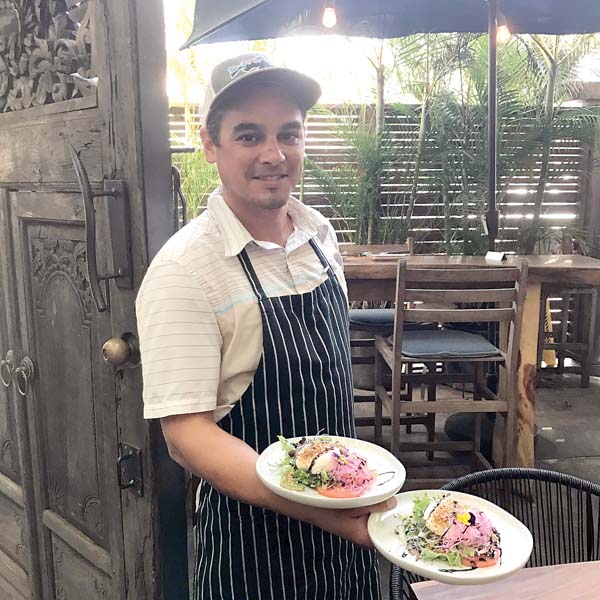 Vana Executive Chef Nick Gerstmar is from Oregon, where he owned a French eatery before moving here three years ago. Carla Tracy photo

“It took us a year to find him,” Baskin says. “Nick is amazing at all cooked items from steaks to crab cakes. He’s got French sauces down pat, including Bernaise and Hollandaise sauces.”

The pork belly Benedict uses the prized Duroc brand of pork and Gerstmar makes his own kimchi. Or opt for toppings of fresh catch, salmon lox, crab cakes, Florentine with spinach and more. Breakfast and some items are considered large plates.

The suggested shared-plate style of eating at dinner is fashioned after Gjelina in Santa Monica and Matsuhisa on La Cienega Boulevard, both in LA where Baskin lived for 10 years before coming here.

The gnocchi is a lighter, crispier Parisian version of the Italian favorite. The hanger steak is made with prime beef. Of course, you’ll want to taste it all.

If you order enough small plates, the bill will run up, so it’s “dining fine” for sure. Vana is the only gourmet restaurant in Paia, besides nyloS, which is located on Baldwin Avenue, and word is starting to spread like wildfire that this place is hot.

“Come with high expectations,” Baskin says. “Our reviews across the board have been very good. Our pricing reflects high quality, high-end ingredients. So people should expect to spend more than at other places in Paia.”

Have a date night and try the mixologist’s Prohibition-inspired cocktails or a nice glass of wine by Sommelier Vanessa Lampson, who curates the cutting-edge list and serves as F&B manager. Do save room for one of the housemade desserts. You’ll wanna come back to Vana for more.

VANA at a glance:

• Where: Located in a garden room oasis at 93 Hana Highway in Paia at the historic Paia Inn.

• Daytime: Brunch is served from 8 a.m. to 2 p.m. daily. Eat crab cake Benedict at noon and a pastrami sandwich in the morning, if you like. Both lunch and breakfast items are available.

• Evening: Happy hour is from 5 to 6 p.m. Wednesdays to Sundays. Get 50 percent off select sushi and cocktails. Dinner is 5 to 10 p.m. on those days. Both will run nightly starting March 1. Valet parking is coming soon. 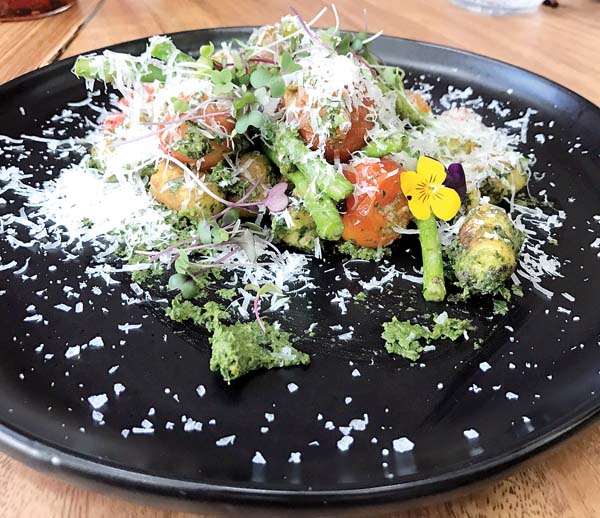 He makes a fresh burrata salad with Haiku tomato and does a vegetarian gnocchi tossed in local pesto. Carla Tracy photo