Artists will pay tribute to songs of West Maui 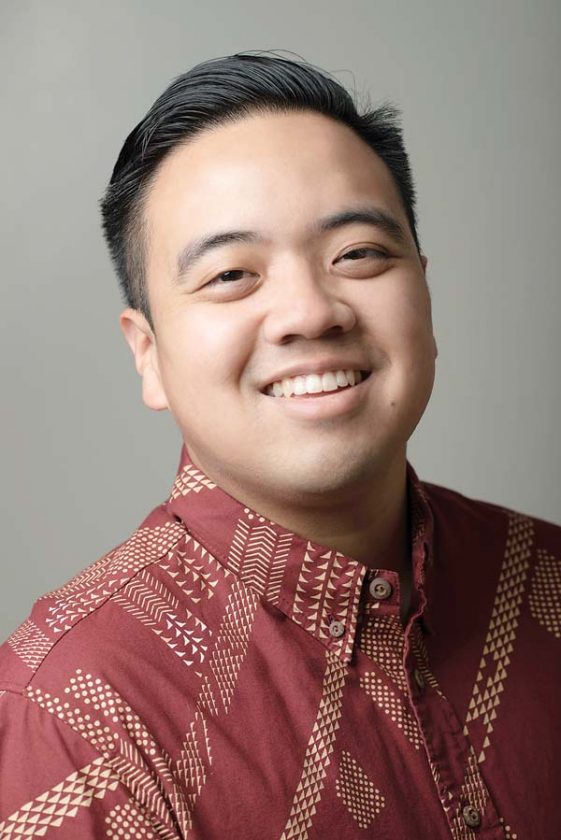 In celebration of the new songbook, “Lei Nahonoapi’ilani: Songs of West Maui,” some of Maui’s most acclaimed musicians, kumu hula, and halau hula will pay tribute to the mele of West Maui with a unique concert in Maui Arts & Cultural Center’s Castle Theater on Sunday night.

“It’s going to be a sensational celebration of Maui, not only her mele and hula, but the kanaka who bring them to life in aloha ‘aina,” enthuses show co-producer Zachary Lum, who will perform with his brother Nicholas Lum, both members of the multi-Na Hoku Hanohano Award-winning group Keauhou.

The genesis of the project began a few years ago when the Lum brothers were contacted about a Hawaiian music project. “My brother and I were approached by a representative of a West Maui community board which funds community projects,” Lum explains. “The project proposed to us was the idea of collecting songs in Hawaiian language for West Maui and creating a publication. So we’re celebrating the release of that publication, a songbook which not only has lyrics and translations, but also transcriptions, musical notations of the songs so people can play along with them, which is really cool.”

While collections of songs similar to the new project have been produced before, “they haven’t been published to this level,” he says. “The book was a catalyst for other projects including two music albums that will come out, one on November 3rd and the second one in a few months. The songs on the first album are older West Maui songs, sung by Maui artists like Keli’i Reichel (“Malu ‘Ulu“) and Amy Hanaili’i (“Pili Palua“), and Napua Greig (“Ma’ema’e Lihau“).” 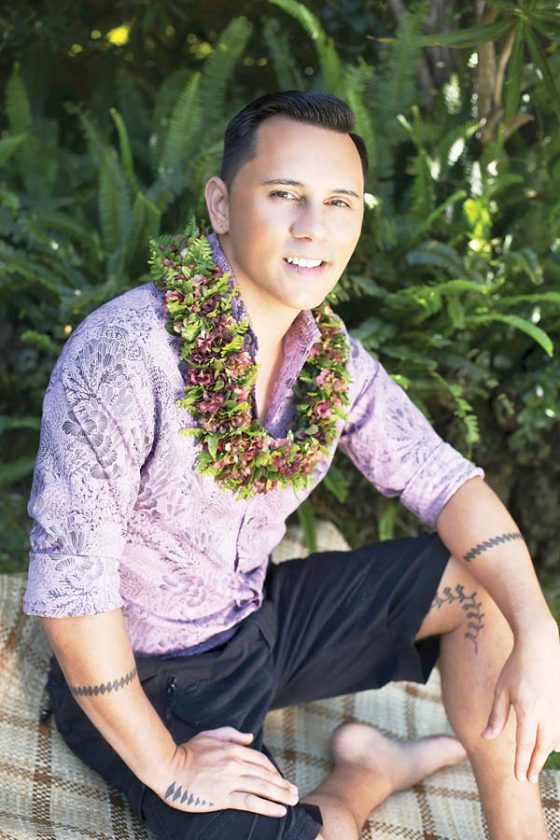 The artists performing at the concert will sing the song they have recorded on the “Songs of West Maui” album along with one other.

“The title of the concert, ‘Lei Nahonoapi’ilani,’ is the title of a song to the tune of ‘Hawaii Aloha’,” he explains. “The song was written for a club which turned into the Lahaina chapter of the Queen Kaahumanu Society. To have people from Maui singing ‘Lei Nahonoapi’ilani’ is a feeling only they can feel because they’re from Maui singing about Maui to the tune of ‘Hawaii Aloha,’ which is a compounding affect.”

“Our vision is to always to reinvigorate the value of Hawaiian music, and more so the value of mele itself, not just for entertainment, but for knowledge retention,” he says. “The more we get used to using mele in different ways like this production the more we will all reap benefits.”

Released in 2017, Keauhou’s self-titled, record-breaking debut album swept the 40th annual Na Hoku Awards, winning in all 9 categories they were nominated. Winning Album of the Year, Group of the Year, and Most Promising Artist, Keauhou became only the third group in Hoku Award history to win the three categories with a debut album. 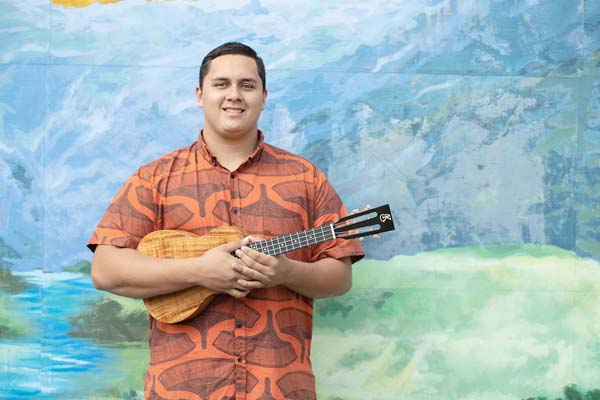 “It was pretty crazy,” he recalls. “We learned later it was the most that had ever been won by one group in one Hoku night. In no way do we have as many Hokus as people like Keali’i Reichel and Robert Cazimero, but we’ve definitely been counting our blessings for the three (album) projects we have released. We always planned on doing a series of three albums that would be like a suite of mele.”

All three musicians are educators and cultural practitioners, and Lum is looking forward to next pursuing a Ph,D. “It’s fun because we’re doing our projects on things like mele,” he notes. “It’s all aligned.”

Helping perpetuate the current cultural renaissance he says, “even with stuff like the politically charged Mauna Kea, outside of the conflict there is an awakening that’s happening via music, via hula, and even with food. The cultural awareness is starting to spread to other things.” 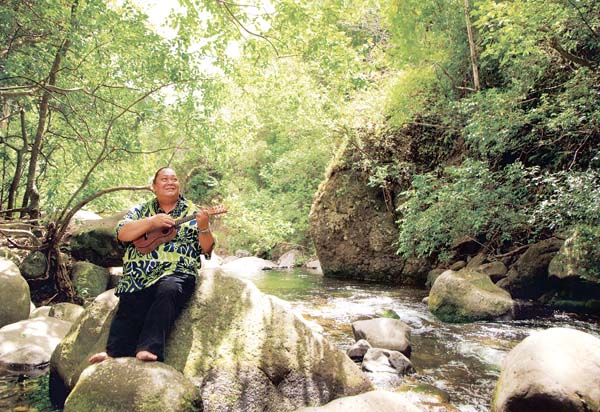 “We were really privileged to gather the recent compositions and have the composers sing them,” he says. “That was a huge wake-up experience for all of us. It was incredible.”

Lum’s beautiful song “Na Pu’uwai Haokila,” performed by Keauhou, is dedicated to, “the hearts of steel, the mountain protectors, lying safe in the road.”

“The term pu’uwai haokila predates Lili’uokalani,” he explains. “There’s a comparison with the magnetic pole. At a certain time, Hawaiians compared it to the pull that one feels of aloha ‘aina, when one feels a pull to a certain place that they’re from. They related it to magnetism. So if your heart is of steel, you are subject to magnetism, you are subject to aloha ‘aina.”

Folks who buy tickets for Sunday’s concert will also receive a discount coupon for the purchase of the “Lei Nahonoapi’ilani” songbook and the first of two accompanying CDs. Proceeds from the project will benefit Na Leo Kalele, West Maui’s Hawaiian immersion program.

“Buying a ticket is an investment in the future of olelo Hawaii with our keiki in west Maui,” says Lum. 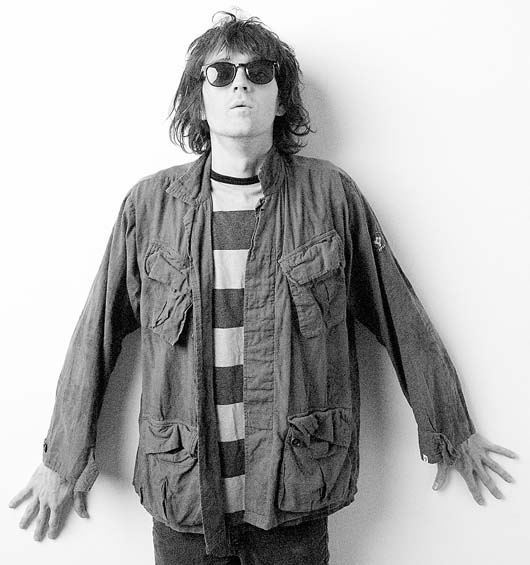 In conjunction with the Hawaii Farmers Union United 9th annual state convention Nov. 8-10, Micah Nelson will lead an acoustic jam session with friends Nov. 7 at a hosted locavore feast at the Mill House restaurant from 5:30 to 9 p.m. He will also help with the drum circles at the Puunene event and introduce a Hemp Tent. CHRIS CUFFARO photo

The Hawaii Farmers Union United 9th annual state convention coming up Nov. 8-10 will include live music and drum circles. The event will be held on Mahi Pono’s “Community Farmlands” in Puunene. Mahi Pono has donated the site for the convention.

In conjunction with the convention, on Nov. 7 Micah Nelson will lead an acoustic jam session with friends at a hosted locavore feast at the Mill House restaurant from 5:30 to 9 p.m. He will also help with the drum circles at the Puunene event and introduce a Hemp Tent.

Currently working on an animated film for Neil Young, Micah was recently featured playing on “Amadjar,” the new album by the Grammy-winning Tuareg band Tinariwen from northern Mali. His latest album as the Particle Kid, “Window Rock,” was released in July. Recorded live with his trio in only four days, Rolling Stone praised, it “combines contagious pop hooks with deeply dissonant psychedelia.”

More information on the convention is available at at hfuuhi.org.

The Irish group The Byrne Brothers will play the Seabury Hall Performing Arts Center on Saturday at 7 p.m. A family band from Donegal, Ireland, the band features Luca age 15 on accordion; Finn age 13 on banjo; Dempsey age 10 on bodhran; and father Tommy Byrne on guitar, fiddle, uilleann pipes and bagpipes. Irish Music Magazine praised band is, “taking Irish music and dancing to a whole new level.” Admission is $15 for adults, $8 for students, and free for kids under 8.

Donavon Frankenrieter will bring his “Record Player Tour” to Charley’s Restaurant & Saloon on Nov. 7 and 8 at 9 p.m.

“I recorded a new album that was the basis for the Record Player Tour,” he told Florida Weekly. “We picked 16 of our favorite songs we play live and went into the studio and re-recorded just the bass and drum tracks. Then on the tour, we spin the vinyl record with the bass and drum and just play guitar and sing over it.”

Tickets are $32, available at www.DovePresents.com.

Caitlyn Campbell (from left), Kala‘i Fong, Dominic Carosso, Jadyn Gurley, Genevieve Chin are shown in a scene from “Catch Me If You Can The Musical.” It opens Nov. 15 at A‘ali‘ikuhonua Creative Arts Center on the Seabury Hall campus in Makawao. PETER SWANZY photo

In conjunction with the Hawaii Farmers Union United 9th annual state convention Nov. 8-10, Micah Nelson will lead an acoustic jam session with friends Nov. 7 at a hosted locavore feast at the Mill House restaurant from 5:30 to 9 p.m. He will also help with the drum circles at the Puunene event and introduce a Hemp Tent. CHRIS CUFFARO photo

Made in Maui County Festival at MACC, Friday-Saturday

Hope Reborn and her partner Joshua Gerald bring deserts to Maui farmers markets from Kipahulu. Selections include chocolates and raw pies as well as jun, fruits and other treats.

In addition to growing organic greens, Hong Zhou plays American folk songs and movie themes on an instrument called an erhu, which is a two-string Chinese violin. AYA GANZ photos