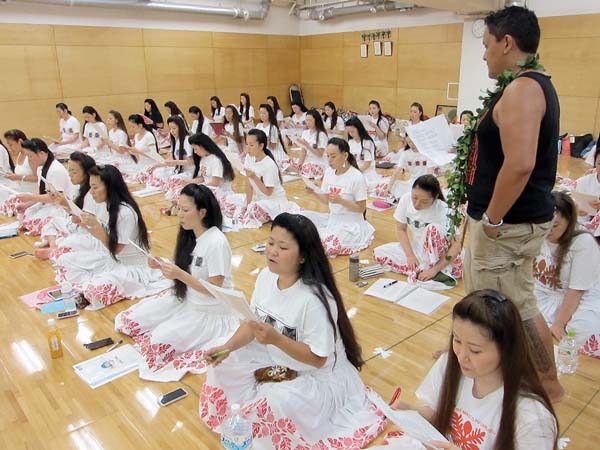 Kumu Hula Lopaka Igarta-DeVera leads Halau Na Mamo O Pu‘uanahulu in Japan. He is one of the kumu hula from Hawaii featured in filmmaker Lisette Flanary’s latest documentary, “Tokyo Hula.” Igarta-DeVera was entrusted by Sonny Ching to move to Japan to open a branch of their school. The documentary will screen as part of the 2019 Hawaii International Film Festival Nov. 21-24 at MACC.

Exploring the burgeoning interest in hula in Japan, where a number of our kumu hula have established thriving halaus, Hawaii filmmaker Lisette Flanary’s latest documentary, “Tokyo Hula,” will premier at the Maui Arts & Cultural Center on Nov. 21.

Screening as part of the 2019 Hawaii International Film Festival, the new doc focuses on Japanese sensei Seiko Okamoto, who was trained by revered Hawaiian Kumu Hula Aloha Dalire, and Hawaiian Kumu Hula Lopaka Igarta-DeVera, who was entrusted by Sonny Ching to move to Japan to open a branch of their school.

Estimates suggests there are around two million hula dancers in Japan.

“I’ve heard estimates as high as four million people,” says Flanary. “It’s getting more popular. The level of dedication and commitment that Japanese hula dancers have is so mind-blowing, that someone can get on a bus in Osaka once a week to study in Tokyo (a 6 hour, 310 mile ride each way). They’re super committed.”

As some musicians and kumu have noted, Japan is playing a vital role in helping perpetuate Hawaiian culture. “A lot of folks here are literally dividing their time between Hawaii and Japan,” she explains. “They pay better over there. One workshop can pay your rent for a month.”

An associate professor of Native/Indigenous Creative Media at the University of Hawaii at Manoa, Flanary teaches courses in screenwriting, producing, and indigenous filmmaking. “Tokyo Hula,” marks her third film in a hula series. She previously directed “America Aloha: Hula Beyond Hawaii” and “Na Kamalei: The Men of Hula.”

“When I finished ‘Na Kamalei: The Men of Hula,’ I was talking with people at film festivals and I had heard a lot about hula in Japan,” she says. “Anyone I knew who was involved with hula, whether dancers, practitioners, and musicians, were always traveling to Japan. I had even seen a couple of Japanese groups perform in Hawaii and I was fascinated by the number of people dancing.”

Not speaking Japanese and never having visited there before she first began filming, Flanary found the project a little challenging. “It was really difficult to fundraise for this one,” she notes. “Initially it started out with how is hula being translated in this very foreign setting, and then it became more an exploration into how is it different and how is it also a business, and how are people using the hula boom in Japan to make a living so they can continue teaching hula here.”

Noticing an increased interest in Japanese learning Hawaiian language and delving much deeper in to the culture, she reports: “There’s even a big resurgence in learning hula kahiko which wasn’t part of the first wave of popularity of hula in Japan. It was older women who had the time and income to take hula auwana classes. The younger generation, who have been studying hula in Japan and seen it in Hawaii at Merrie Monarch, is very dedicated and have a reverence for Hawaiian culture.”

In the 1980s, hula courses were offered at culture centers in Japan as a form of exercise. Advertisements suggested participants could “dance hula for your beauty and health” or enjoy “elegant hula for your youth.” “It was really marketed to a certain demographic,” she notes. “The first wave was tied to an economic boom and bubble that popped eventually.”

“What’s different now is we have kumu who literally have dual residences in Japan and Hawaii, (and) they started satellite schools,” she says. “The way the schools are modeled is so different than in Hawaii. Here we have hula once a week and we directly study under a kumu. In Japan, you can have one teacher at the top and five alakai, sub teachers, and they all have their schools, and they have five alakai, so it becomes this larger franchise. You can have one sensei in Japan with 2,000 or 5,000 students. Sonny Ching in the film calls it like an Amway system.”

In recent years, where hula was once exclusively a female domain, Japanese men are increasingly drawn to dance. “I’m seeing way more men dancing hula than I did 10 years ago, and both kahiko and auwana,” she says.

A former resident of New York City, Flanary’s love for hula began in childhood. Her mother was born in Hawaii and her grandmother was a picture bride from Japan. “My mom used to dance hula, and from visiting family (in Hawaii) throughout my childhood, I developed a love for hula from a young age,” she recalls.

She began dancing hula in 1999 through New York’s Hawaii Cultural Foundation. “I took some summer classes and started studying hula in earnest when I lived in New York. I went to NYU film school and had seen advertisements for hula classes in New York, but it was working on my first film that started weekly hula classes for me.”

“I was basically looking at hula in the greater Los Angeles and San Francisco Bay area, focusing on people who had moved away from Hawaii because they couldn’t afford to live here and had created their own sense of community through hula,” she says. “Patrick Makuakane became my kumu. Especially because it was going to air on PBS, one of the big goals was to show that hula is so much more than what you see in Hollywood movies. I hated all the stupid questions I’d get about hula. It became easier to make a film to explain myself. When I was promoting the film, the one question I got at every Q and A was, “were those men dancing on screen? I had no idea men danced hula.’ Well that’s annoying; now I’ll have to make a movie about that.”

With a focus on male dancers, Flanary’s “Na Kamalei: The Men of Hula,” showcased revered Hawaiian legend Robert Cazimero and his award-winning halau. The film received the Hawaii Filmmaker Award at the Hawaii International Film Festival in 2007, and Best Documentary and Audience Awards at the San Francisco International Asian American Film Festival.

“Robert to me is the penultimate Hawaiian musical artist, entertainer and kumu hula, so to get a behind-the-scenes look at how he works with the men of Na Kamalei was super cool,” she enthuses. “To be on that magical journey to Merrie Monarch in 2005 was really special. It was so amazing.”

Taking a break from hula docs, she next directed “One Voice,” about the Kamehameha Schools Song Contest, told through the eyes of student song directors.

“They were such an amazing group of talented young people,” she says. “I did feel like I was in high school for a year, following them, being in class and eating cafeteria food. Musically, I was in awe. One of the song leaders from ‘One Voice,’ Zach (Zachary Lum of Keahou) did some music for Tokyo Hula.’ He did the opening and credit music, which was such a treat.”

* “Tokyo Hula” screens on Nov. 21 at 7 p.m. in the MACC’s McCoy Studio Theater. It is preceded by the short film “Voices of the Forest,” featuring Kumu Kaui Kanka’ole. The Hawaii International Film Festival runs Nov. 21-24. Tickets are $12 per film (plus applicable fees). For tickets or more information, visit the box office, call 242-6469, or visit www.mauiarts.org.

Niskala will perform Roger Sessions’s “Piano Sonata No. 1,” two works by Robert Helps including his “Three Hommages,” “Mementi” by Vivian Fine, which was composed in honor of the 150th anniversary of Schubert’s death, Arnold Schoenberg’s legendary “Opus 19,” and “In the Mists,” by renowned Czech composer Leos Janacek.

While on Maui, Niskala will record modern music for inclusion in E&FA’s planned fifth CD.

There will be an intermission at the concert with complimentary food & beverage.

Kumu Hula Lopaka Igarta-DeVera leads Halau Na Mamo O Pu‘uanahulu in Japan. He is one of the kumu hula from Hawaii featured in filmmaker Lisette Flanary’s latest documentary, “Tokyo Hula.” Igarta-DeVera was entrusted by Sonny Ching to move to Japan to open a branch of their school. The documentary will screen as part of the 2019 Hawaii International Film Festival Nov. 21-24 at MACC.

Kala‘i Fong (from left), Jadyn Gurley, Caitlyn Campbell, Genevieve Chin, and Dominic Carosso are shown in a scene from “Catch Me If You Can The Musical.” It opens Friday at A‘ali‘ikuhonua Creative Arts Center on the Seabury Hall campus in Makawao. PETER SWANZY photo