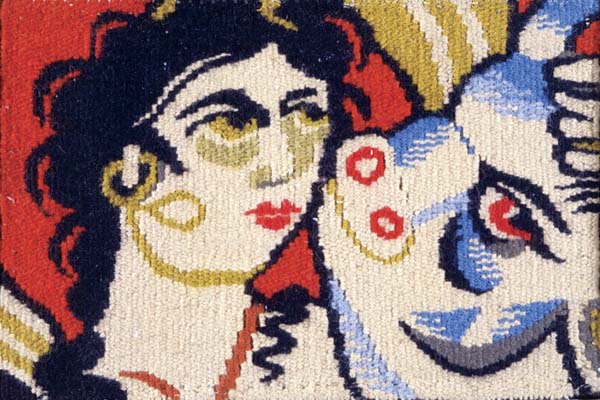 “Nereid Riding a Bull,” a tapestry by Archie Brennan

Archie Brennan, the grand old man of tapestry weaving who lived some of his life on Maui, died Oct. 31 in the arms of his wife, Susan Martin Maffei, in upstate New York.

Brennan, 88, and Martin Maffei, a renowned tapestry artist in her own right, were active with Hui No’eau Visual Arts Center in Makawao for several years, with an artist-in-residence stint, gallery shows and lectures, and tapestry workshops. Brennan also wrote a weekly column for the now-defunct South Maui Times.

Brennan was born in 1931 in Roslin, Scotland, near Edinburgh. He studied drawing at Edinburgh College of Art evening classes at age 15, where he met apprentices from DovecotStudios (Edinburgh Tapestry Co.) who also were attending as part of their apprenticeship

In 1948, he joined Dovecot Studios and his apprenticeship lasted until 1954, after which he traveled and studied in France until 1956. He returned to Scotland to earn graduate and post-graduate degrees at Edinburgh College of Art from 1958 until 1962.

From 1962 to 1977, he established and developed the graduate and post-graduate Department of Tapestry and Fibre Arts at the Edinburgh College of Art. He also became director of Dovecot in 1963. 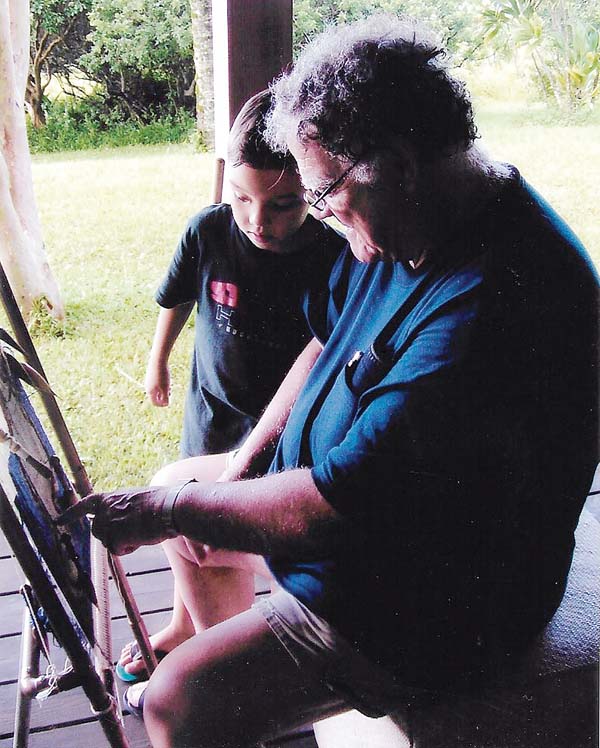 Under the curious eye of Reyn Isbell, renowned tapestry artist Archie Brennan is shown at work in 2004 at his special loom. He designed the loom for himself, and then donated the design to other fiber artists for personal use only. Brennan was staying in Huelo during a special exhibition of his work at Hui No‘eau Visual Arts Center. Ailing the past four years, the grand old man of tapestry died in New York on Oct. 31. -- WENDY ISBELL photo

In 1975, Brennan moved to the Australian National University, where he furthered his own tapestry weaving skills. There, he helped establish the Victorian Tapestry Workshop in Melbourne. He then moved to Papua New Guinea and the new National Arts School.

He moved to Maui in 1984, then New York in 1993. During the time spent in New York, Brennan and Martin Maffei traveled extensively nationally and internationally for shows, workshops and lectures.

Among his many honors, Martin Maffei recalled the Officer of the British Empire that he was awarded by Queen Elizabeth II for his contribution to the arts.

“And his Mr. Scotland title of 1953 and Mr. East Scotland in 1954: we had a contact recently that sent me that information and a great image of him at age 22. When I showed it to him, he looked at it for a long time and then said, ‘I am so proud.’ Dear Archie, always happy,” Martin Maffei said.

“We were partners in art, weaving, teaching, exhibits, travel and life for more than 30 years. Probably together 24 hours a day and never tired of sharing a simple but wonderful life, and I believe we would not have had it any other way. It was a gift,” said Martin Maffei.

On its website, the American Tapestry Alliance quotes Brennan:

“Quite simply, the practice of woven tapestry has been an obsessive passion my entire adult life,” he said. “It is my creative language, and I love, hate, delight and struggle with it each day, all day. In a unique manner, it is a vehicle to convey concept, comments, harmony, discord, rhythm, growth and form. Simply put, it is what I do. That tapestry today is widely regarded as a minor art form leaves me unconcerned. This is someone else’s problem.

“In 1967, I made a formal decision to step away from the burgeoning and exciting fiber arts movement and to refocus on woven tapestry’s long-established, graphic pictorial role. My belief was and still is that tapestry had foundered into an imitative, reproductive process.”

On the website for Dovecot Studios, Kate Grenyer, exhibitions curator, wrote that Brennan “is recognized internationally as a master of modern tapestry.” He’s also known as an innovator, pioneer, iconoclast and friend to Eduardo Paolozzi and Sean Connery.

“I would say that he’s a brilliant, undiscovered pop artist. He’d pick icons like Princess Di or Muhammed Ali, and he played with those images in the same way as pop artists,” Grenyer said.

“He’s hugely well known as a tapestry artist, but if he worked in sculpture or painting, he might be better known. His work has very clever pop references in it — contemporary magazine imagery, newspaper imagery. He plays with the way tapestry makes up an image bit by bit — fast-moving sketches of fast-moving TV images became part of his tapestry.”

Indeed, during his time on Maui, Brennan wrote a weekly column for the South Maui Times and often wove pop topics into his tapestry of words, with no little serving of his sardonic wit. For instance, he turned an Associated Press article about America’s consumption of potato chips into a hilarious mash-up of the trivial aspects of modern life taken too seriously in newspapers.

Local artist George Allan said he loved Brennan’s Scottish accent. His father was born in Scotland, and later moved to Melbourne, where Allan was born. He and wife, Janet, called Brennan “amazing.”

“We were amazed with his varied accomplishments, before, during and after leaving Maui.,” said Janet Allan.

He is also survived by his son, Jesse McFadden Brennan, who is a software developer living in Denver; three daughters, Christine Humphries of Sydney, Australia, Sara Brennan Brown of Edinburgh, and Jane Hext of Cardiff, Wales; as well as one granddaughter and five grandsons.

The National Museum of Scotland, in partnership with the Dovecot Studios, is planning a retrospective of his work in Edinburgh in the fall of 2020.