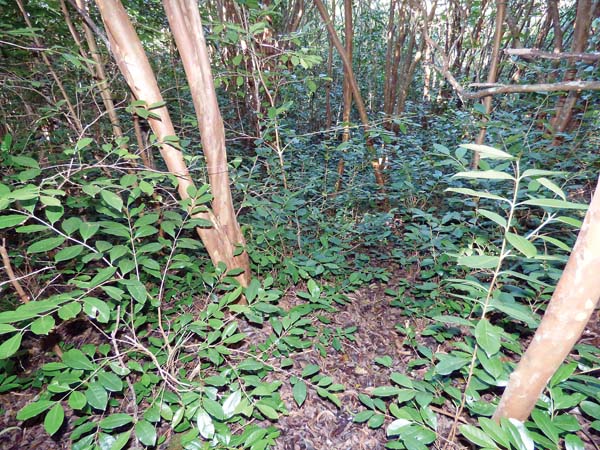 Strawberry guava is one of the most invasive plants in Hawaii’s rainforest. It also releases more water back to the atmosphere than native plants. New research could provide a tool for land managers to prioritize the removal of invasive plants with the greatest impact on water capture and identify areas most sensitive to the impacts of invasive species. -- Photo courtesy of Forest and Kim Starr

In Hawaii, the supply of fresh, plentiful water depends on the forest capturing moisture from fog drip and rain, and then move it to streams and aquifers. Scientists and resource managers know that invasive plants disrupt the capacity of a native ecosystem to collect water. Invasive species are the greatest threat to the function of native ecosystems in Hawaii.

But there are many unanswered questions about how and to what degree invasive plants affect the water capture. Water capture depends on both rainfall and cloud or fog drip, water then moves through the forest and soil to streams and underground reservoirs (aqui-fers). Some water is lost through evaporation and transpiration — the movement of water from roots through the leaves and into the atmosphere.

Like straws, plants pull water out of the ground and release it into the air. Differences in both the physical structure and growth characteristics contribute to different rates of transpiration between native and invasive species.

Tom Giambelluca is looking closely at those differences. Giambelluca is the director of the Water Resources Research Center and a professor in the Department of Geography and Environment at the University of Hawaii at Manoa. He has spent much of his career looking at the impacts of invasive species on water resources in Hawaii. His latest research attempts to tease out and quantify how invasive species increase the loss of water back into the atmosphere.

“One of the reasons invasive plants take over might be that they grow faster,” he says. “Faster growing plants tend to use more water” and over the long run, as invasive plants take over the native-dominated forest, these differences in transpiration rates could have significant impacts on the cycle of water through the environment and the availability of water for human use. 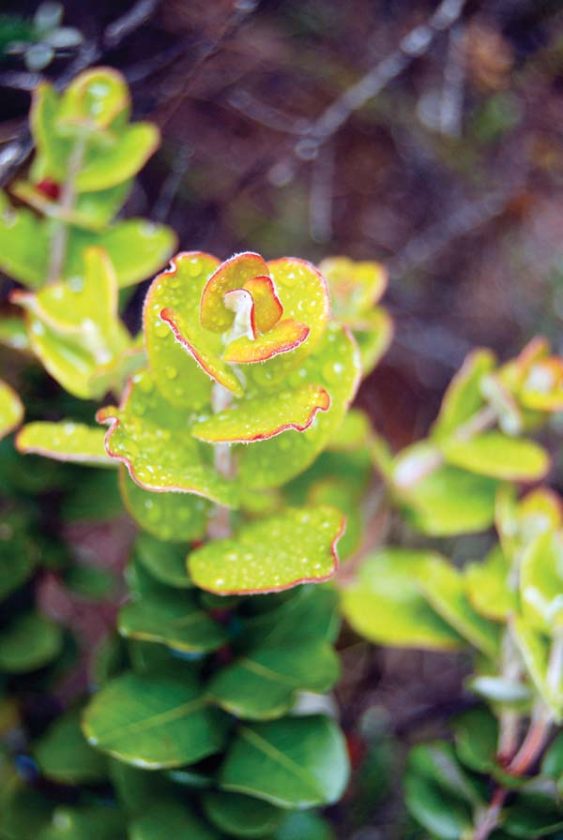 Scientists study the differences between how native and invasive plants use water. The native ohia is extremely efficient at capturing water from clouds and releases less water through transpiration than some invasive species. -- Photo courtesy of Anya Tagawa

To quantify these impacts, Giambelluca has relied on an experimental model of setting up monitoring equipment in paired sites where forest dominated by native species is growing immediately adjacent to stands of invasive plants. This site selection eliminates differences that may be caused by soil types and weather patterns in geographically separate locations. Weather can vary dramatically within a small distance in Hawaii. He then looks at the differences in transpiration by setting up tall towers filled with monitoring equipment and using measurements of water flow moving up the stems of sample trees.

But suitable study sites are hard to find — and funding additionally limits the number of sites he can potentially set up. With only a limited number of sites, he can’t accurately predict the impacts invasive species may have on transpiration rates across the landscape.

So, Giambelluca is developing an experimental model wherein he can evaluate sites based on data that can be collected in a single day, therefore enabling his team to gain a better understanding of how individual differences in plant transpiration rates can impact water capture throughout Hawaii. And he’s focusing primarily on leaves.

“Leaves are where the action is,” explains Giambelluca. “It’s where the plants control the uptake of carbon dioxide and release of water vapor.”

He takes a handful of measurements including the leaf area index (the surface area of all leaves over a given area), and leaf gas exchange rates of different plant species. The more leaves in an area, the higher the transpiration rates. Invasive-dominated forests tend to have a higher leaf area index (i.e,. more leaves). Plant species transpire at different rates. After he has enough data to be statistically significant, he can then combine that with distribution maps of plant species across Hawaii, and better assess the impacts invasive species have on the amount of water lost through transpiration.

While still in the proposal stage with results a few years in the future, the potential outcomes from this research could help inform the decisions resource managers and funders face in setting priorities both for which species should be controlled as well as which areas are more sensitive to the impacts of invasion. In the meantime, enjoy a fresh glass of water brought to you by a native forest nearby.

For more information on Giambelluca’s research, check out his lab page at sites.google.com/a/hawaii.edu/ecohydrology_lab/.

* Lissa Strohecker is the public relations and education specialist for the Maui Invasive Species Committee. She holds a biological sciences degree from Montana State University. “Kia’i Moku,” or “Guarding the Island,” is prepared by the Maui Invasive Species Committee to provide information on protecting the island from invasive plants and animals that can threaten the island’s environment, economy and quality of life.