Coffee berry borer has struck other islands with devastating results 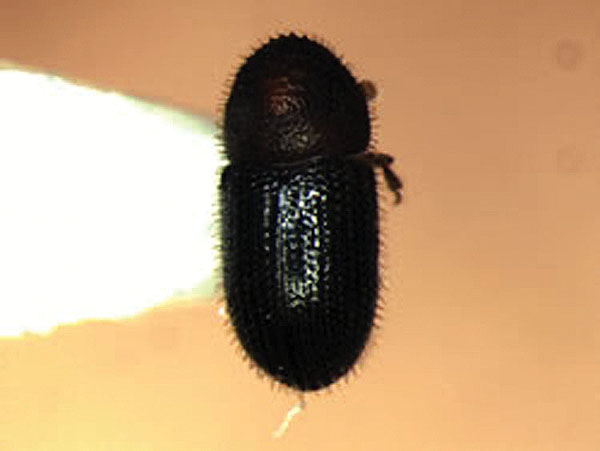 This is a photo of an adult coffee berry borer found on Maui. University of Hawaii College of Tropical Agriculture and Human Resources photo

“You farm all your life; you know these are coming and they come,” said the owner of Maui’s largest coffee farm after the state Agriculture Department reported Thursday that the coffee berry borer has made its way to the Valley Isle.

Kimo Falconer, president and owner of MauiGrown Coffee, said the beetle — which can claim as much as a third of a coffee berry crop — has not been found on his 400-acre farm in Kaanapali, but an infestation has been detected in Kipahulu.

Falconer has begun taking preventative action, such as cutting down trees near the road to prevent hitchhiking beetles from hopping on trees, and workers have been checking beans from the recently completed harvest for pest damage. Berry borer traps have been up on the farm for the past two years, and they have been clean.

In Kipahulu, though, a 13-acre coffee farm has an infestation of the berry borer, which was first detected in Hawaii’s iconic coffee growing region, Kona, in 2010, the state Agriculture Department said. Entomologists with the department confirmed that the berry borer infestation covered the entire farm, “which indicates the infestation has been there for some time.”

“The thing doesn’t just grow and go nuts overnight,” said Falconer. “It takes a couple of years to blow into something.”

Detection of the Kipahulu infestation, which the Agriculture Department did not initially disclose, began in November when a Hamoa resident contacted the department about the pest in two backyard coffee trees. Traps were set up and continue to be monitored.

Last month, a neighbor of the infested Kipahulu farm reported a possible berry borer presence to an extension agent with the University of Hawaii College of Tropical Agriculture and Human Resources, the department said. The Kipahulu farm and Hana residence are about 12 miles apart, and it is not known if the two infestations are related.

The pest has not been detected in West Maui, Iao Valley or Waikapu, the department said.

The department’s Plant Quarantine Branch is working on expanding quarantine protocol for movement of coffee plants and plant parts from Maui to noninfested areas.

The Agriculture Department already had issued a quarantine order that requires a permit to transport unroasted coffee beans, plants or plant parts; used coffee bags; and coffee harvesting equipment from Hawaii island to other islands not infested with the berry borer. Other rules require treatment of unroasted coffee beans, including fumigation, freezing and heat and inspection prior to shipping.

“Despite strict quarantine rules that have been established on the interisland movement of coffee plants and plant parts from Hawaii island, CBB (coffee berry borer) infestations have been extremely difficult to contain,” said Scott Enright, chairman of the state Board of Agriculture. “We ask that coffee growers continue to be vigilant and learn about CBB and how infestations can be detected and managed.”

The small beetle, about a 16th of an inch, bores into the coffee cherry to lay its eggs. The larvae feed on the coffee bean, reducing the yield and quality.

Falconer explained that the berry borer enters the bean from the flower end and consumes the flesh. “When you pick it, it looks normal from the outside but there’s nothing inside,” he said.

The berry borer is native to Central America and is found in many coffee growing regions around the world.

The economically damaging coffee berry borer was first discovered in Hawaii in Kona in 2010 and spread to Kau on the Big Island. The pest that eats the coffee cherry from within also has been found on Oahu and, as of November, on Maui. It has not been found on Kauai.

Hawaii was one of the last coffee growing regions in the world to become infested with the berry borer due to strict importation rules, Falconer said. Those rules require fumigation of all imported green (processed) coffee beans to rid the beans of pathogens and insect pests and ban the importation of coffee plants and parts into the state.

It is not known how the berry borer made its way to Hawaii island or how it got to Oahu, the Agriculture Department said.

Hawaii remains a small player on the world coffee market, Falconer said. Hawaii’s 950 farms produced 34.7 million pounds of utilized coffee cherries with a value of $54.2 million in 2015-2016, according to a “Hawaii Coffee Growers Report” by the UH College of Tropical Agriculture and Human Resources and the Hawaii Coffee Growers Association and Industry.

Falconer said that he watched “the hell over in Kona” caused by the borer beetle on the Big Island. Many small growers, as was their traditional practice, hired laborers to handpick the beans for $2 a pound, Falconer said. But the beans, which looked fine on the outside, were up to 40 percent unusable due to the berry borer.

He said the coffee industry took a nosedive, then leveled off. There was a period of denial and some farmers got out of the coffee business. Then, growers began jumping on board to manage the pest.

They cut down trees, swept up all the berries to sanitize their farms and began using a fungicide, which suffocates the beetle, he said.

“It’s not as effective as an insecticide,” Falconer said, adding, “I’m going to have to find out pretty soon” how to use it.

Falconer, who is president of the Hawaii Coffee Growers Association, went to Brazil last summer to see how farmers there handled the berry borer. He said Brazilian farmers use helicopters to spray insecticides that have been banned in the U.S.

Since its detection, Big Island coffee growers have managed to keep infestations down to about 20 percent of the coffee crop, the department said.

Falconer said his farm, which produces about a half-million pounds of processed green beans per year, has some advantages because it is isolated from other coffee farms, reducing the chance of infestation. While he doesn’t have to worry about neighbors, there still is the threat of infestation from wild trees.

If his farm does get infested, Falconer said it might be more advantageous for him to prune his trees to “break the life cycle” of the pest. With 400 acres, he doesn’t have the equipment to use the fungicide.

UH College of Tropical Agriculture and Human Resources and the state and federal Agriculture Departments will be holding two workshops on the berry borer at the Kula Community Center on Monday.

* This article includes a correction from the original published on Friday, Jan. 6, 2017. The story had incorrect information about the locations of the infestations in Hawaii. The Maui News apologizes for the error.

Oahu workers who went to Lanai positive for virus