Commission rejected special use permit for Haiku business in July 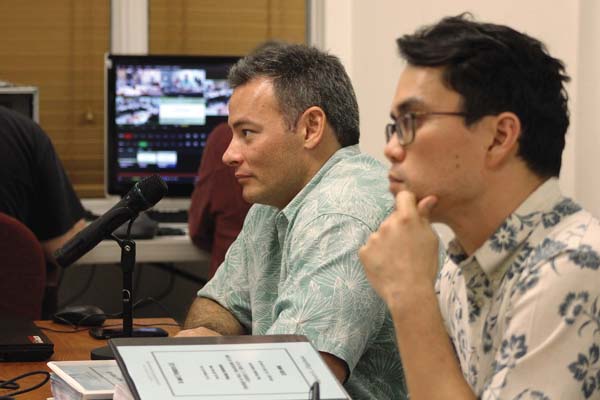 Attorneys Cal Chipchase (left) and Christopher Goodin listen as the Maui Planning Commission discusses whether to reopen a hearing for D&S Ventures, which runs the unpermitted Northshore Zipline Co. in Haiku that has prompted many complaints from neighbors. The commission, which had already denied a special use permit for the company, voted unanimously Tuesday against reopening a hearing. The Maui News / COLLEEN UECHI photo

WAILUKU — A second-chance hearing for an unpermitted zipline company in Haiku was unanimously denied by the Maui Planning Commission on Tuesday.

After the commission denied a special use permit for Northshore Zipline Co. in July, the company asked to reopen the hearing and offered to scrap plans to build an 80-foot tower and other challenge course elements. But Haiku residents said the zipline is still a disruption to the neighborhood and Northshore Zipline continues to add attractions despite its lack of a permit.

“Nothing that I’ve heard today changes my mind,” commissioner Wayne Hedani said. “To eliminate the 80-foot tower and retain the existing operation does not remove any of the problems that we encountered with this applicant.”

Run by Derek Hoyte of D&S Ventures, Northshore Zipline occupies 17.5 acres of a 36-acre parcel at 2065 Kauhikoa Road in Haiku, according to the special use permit application. The business includes seven different ziplines that take riders as high as 70 feet, with ziplines as long as 900 feet, according to the company website.

D&S Ventures co-owns the land with Robert E. Copp Jr. and LCRC Ohana LLC, according to Maui County property tax records. The land is zoned agricultural and has historical significance as the former Camp Maui, where Marines relaxed and trained during World War II. Northshore Zipline couples its ziplining with historical tours and houses a museum and military vehicles on its property.

According to the permit application, tours began at Camp Maui in 2010, and the historical tours as well as recreational operations have contributed more than $250,000 in state and county taxes since July 2010. However, Hoyte’s attorneys could not say Tuesday when exactly the zipline started.

In 2013 and 2014, the county issued two warnings to the company for operating without a permit. When tours continued, the county issued a notice of violation on Dec. 11, 2014, ordering Northshore to cease and desist, and began fining the company $1,000 a day. Total fines accumulated were not available Tuesday, but as of July, Northshore had already racked up $565,000 in fines, according to Deputy Planning Director Michele McLean.

At its July 12 meeting, the Planning Commission unanimously denied a permit for the company, after deciding that the commercial side did not match up with the uses for agricultural zoning.

Since then, neighbors said, the business has continued to run tours and has added a bungee jumping attraction that creates more of the high-pitched screaming and swearing that many complained about in July.

“There is continued activity, expanded activity, and this doesn’t bode well for the future,” Haiku resident Stephen Hynson said Tuesday. “(Hoyte is) just basically running roughshod over the neighbors.”

But Hoyte’s attorneys, Cal Chipchase and Christopher Goodin of Honolulu law firm Cades Schutte, argued that a hearing should be reopened because the Maui Planning Commission didn’t follow the proper procedure in July. Chipchase said that the public hearing should have been separate from the contested case hearing, instead of having testimony before and after the zipline company’s presentation.

Witnesses should’ve been sworn in and been subject to cross-examination, and D&S Ventures should have had a chance for rebuttal, according to state laws on contested cases, Chipchase said. Their testimony should not have counted as evidence in the commission’s decision, he argued.

“When we don’t follow proper procedure, the decision . . . can be reached for the wrong reasons,” Chipchase said. “Let’s have a full and correct hearing that results in a decision, up or down, that is actually based on the evidence and not unsworn testimony.”

But commission members said they’d been following the same procedure for years, in line with County Code and the chapter of state law on public hearings. Cross-examination and rebuttals would make an already lengthy process “unmanageable,” commissioner Richard Higashi said.

Commission Chairman Max Tsai pointed out that Hoyte failed to show up to the July meeting.

“When we have public testimony . . . it’s fair for both sides to be represented,” Tsai said. “In your particular case, your applicant can easily represent himself, but he didn’t. . . . That’s a fair opportunity we give to everybody.”

Hoyte was also absent Tuesday. In an email in November, Hoyte maintained that his business was operating legally. He said the county “specifically allowed us to continue to operate” while the company sought a permit.

“We believe that we’re operating within requirements of the law at our Camp Maui location,” Hoyte said.

“We have met with our neighbors to discuss their concerns, and we are working with them in a cooperative fashion,” he added.

However, Planning Director William Spence said that while the county gave Hoyte a chance to get a permit, it did not approve continued tours.

“I don’t think it could ever be characterized by the county that we said ‘Yes, it’s absolutely fine for you to go ahead and operate,’ ” Spence said. “We knew they were operating. We didn’t say ‘Fine, please, go ahead.’ ”

Hoyte also said there are other ziplines without special use permits operating on Maui. The number of known, unpermitted ziplines was not available Tuesday evening, but one Haiku testifier who lives by an unpermitted business said there have to be better regulations.

“The county and the planning commission has to come up with some plan to stop this from happening in small neighborhoods where the noise level and the activity level is so great that it makes your life miserable,” Robert Friedlander said. “The person in our valley is a bully as well.”

In the past, the department has allowed ziplines on properties where agriculture was clearly the main use, Spence said.  Northshore Zipline operations were not related to agriculture, he added.

However, he said “we’re going to make it clear in the future” that zipline businesses need special use permits.

Chipchase declined to comment after the meeting, but Spence said Northshore Zipline could appeal to Circuit Court.

“Much will depend on what the court says,” Spence said.