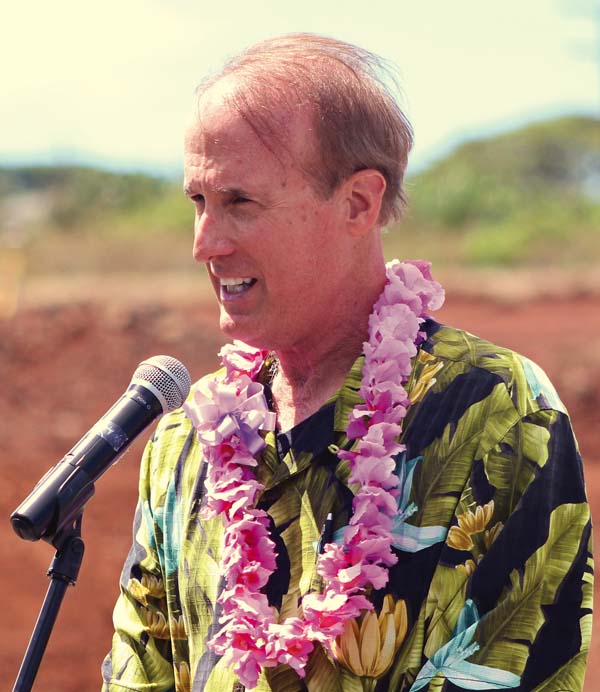 Brian Hoyle speaks at the groundbreaking for the West Maui Hospital and Medical Center on Aug. 16. He is the president of Newport Hospital Corp., which is developing the entire 53,000-square-foot medical campus. The Maui News / COLLEEN UECHI photo

With about 70 percent of the on-site preparation work done for the West Maui Hospital and Medical Center, the project is seeking as much as $85 million in bond financing for equipment purchases and to complete construction, hospital and medical complex developer Brian Hoyle said Thursday.

“We’re all very excited we’re going to start construction of buildings,” he said.

But before that happens, the final, big piece of financing needs to be put in place.

The long-awaited hospital development in Kaanapali already has approval for a $50 million special purpose revenue bond from the state Legislature, but that won’t be enough because of high building costs in Hawaii, Hoyle said.

Instead of seeking approval from Hawaii lawmakers for an amendment for up to $85 million in bond financing, hospital developer West Maui Hospital Foundation decided to seek a privately funded bond offering through the Wisconsin Public Finance Authority, he said. That agency can serve as a conduit to issue the municipal bond, which would be available in $100,000 chunks of federally tax-exempt investments, most likely for institutional lenders. 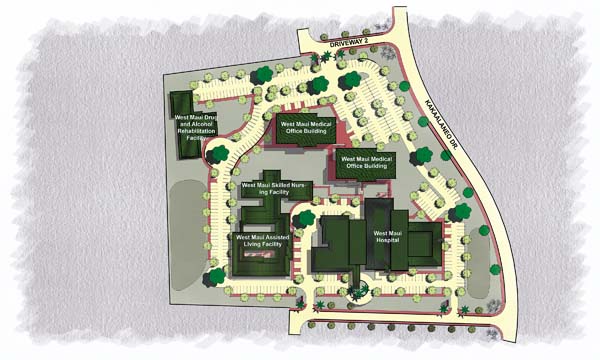 The majority of the on-site work on the West Maui Hospital and Medical Center has been completed. The target for opening the 53,000-square-foot medical campus is late 2018. When built out, it will include a 24-hour emergency room, three operating rooms, a 40-bed skilled nursing facility, a 40-unit assisted-living facility, two medical office buildings and a 40-bed drug-and-alcohol rehabilitation facility. West Maui Hospital and Medical Center graphic

The Wisconsin authority also offers a better interest rate and financing, he said. “It’s a more expeditious way to get financing.”

Although there would be authority to offer as much as $85 million, the amount borrowed would “probably not be that much,” Hoyle said.

The federal Tax Equity and Fiscal Responsibility Act, approved by Congress in 1982, requires giving public notice of the intent to offer bonds for the West Maui hospital through the Wisconsin agency, he said.

The bonds will not be issued by Maui County, and it will have no liability in connection with the bond offering, according to a notice of a public hearing.

“There is no responsibility for any taxpayer,” Hoyle said. “There’s no liability for the people or government.”

A public hearing has been set for 9 a.m. March 13 at the Kalana O Maui Building, Room 212, according to a legal notice published Thursday in The Maui News.

The county’s role will be limited to conducting the public hearing and determining whether the bonds should be issued based on a finding that it would have a sufficient community benefit. Written comments should be submitted to the Department of Finance prior to the meeting. For more information about the bond issue, call 270-7844.

Anyone in need of special assistance in attending the hearing should contact Finance Department Director Danny Agsalog at 270-7475.

After the public hearing is completed on Maui, the bond documents will be published, and bonds offered publicly, Hoyle said. By mid-April, bond funds should be put in escrow and made available for the hospital project’s construction and development, he added.

Photos showing initial ground preparation work in August through November have been posted at wmhandmc.com.

On-site work has been mostly completed by contractor Goodfellow Bros., Hoyle said. Grading is finished for the campus’ 15 acres, while work is ongoing for the installation of drainage, water and sewer lines.

The compacted-soil pads for buildings have been “pretty much done,” Hoyle said.

Part of that work has been unearthing “huge boulders,” he said. It’s been necessary to bring in a rock crusher to reduce them to the size of pebbles, he said.

Off-site work has not been started yet, he said. That work includes water and sewer lines and electrical work. All utilities will be brought to the project’s private road, Kakaalaneo Drive, he said.

The building contractor is F&H Construction, which built the Kihei Police Station that opened in December 2013.

When completed, the 25-bed, full-service hospital will include a 24-hour emergency room, three operating rooms, a 40-bed skilled nursing facility and a 40-unit assisted-living facility. Other features include two medical office buildings and a 40-bed, drug-and-alcohol rehabilitation facility.

Hoyle is president of Newport Hospital Corp., which is developing the entire complex.

The development is expected to generate 150 jobs for doctors, nurses and clinical and support staff. The hospital will be owned and operated by the nonprofit West Maui Hospital Foundation.

The center will be the first hospital built in Hawaii since the North Hawaii Community Hospital was constructed on the Big Island in 1995. Maui Memorial Medical Center opened in 1952 in Wailuku.

For nearly 20 years, West Maui residents have sought a hospital for the community that is isolated at times by brush fires, traffic congestion and road closures. The state awarded the project a certificate of need in March 2009.

* This article includes a correction from the original published on Saturday, Feb. 25, 2017. The contractor’s name was incorrect in the story. And, the building pads were described incorrectly in the same story.