Arakawa presents his ideas for the county at annual address 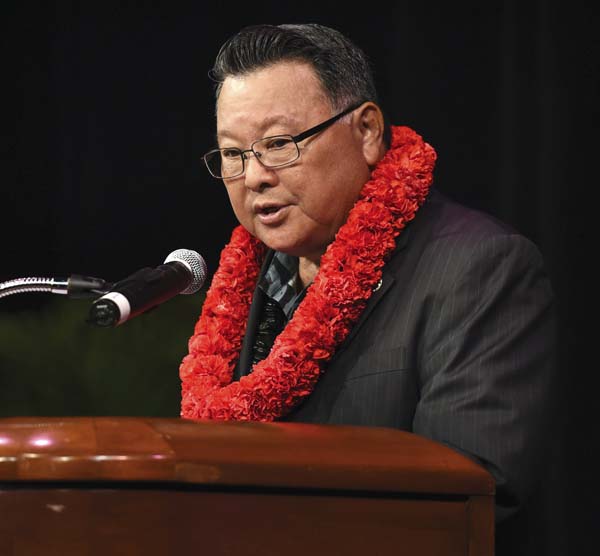 KAHULUI — Mayor Alan Arakawa presented an array of ambitious plans for the county, including buying more shoreline property to prevent development, creating an affordable housing fund and shutting down the 87-year-old Waiehu Municipal Golf Course during his State of the County address on Thursday.

The popular golf course is losing nearly $3 million a year and has lost $16.3 million over the past decade, he said. The course only earned $1 million last year and spent $4 million.

“The trend for golfing has been declining, and we have to be able to look at our budget,” Arakawa said after his address at the Maui Arts & Cultural Center’s McCoy Studio Theater. “We can raise taxes and compensate for the losses that way, but I think it’s time we really look at the areas we’re bleeding money and make some of those tough decisions.

“And as mayor, I’m making the tough decisions.”

The proposed closure would not result in any layoffs; the 20 park personnel would be transferred to other park facilities, Arakawa said. The golf course includes a driving range, pro shop and Fatt Chicks Burgers restaurant. 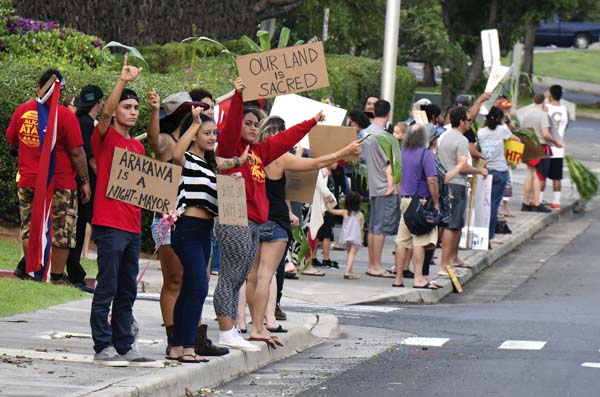 The mayor proposed investing “a couple hundred-thousand dollars” to subsidize senior and junior golfers to play at other courses.

“I cannot sacrifice those kinds of programs for something that is ‘nice to have.’ ”

County Parks Director Kaala Buenconsejo clarified Arakawa’s comments, saying “it’s not about shutting the golf course down” but rather “being fiscally responsible and finding more solutions for the revenue loss.” He said about 65,000 rounds of golf are played at the Waiehu course each year, with a great majority by residents.

“It’s also about hearing what the public has to say about how we can make it better,” Buenconsejo said following the address. 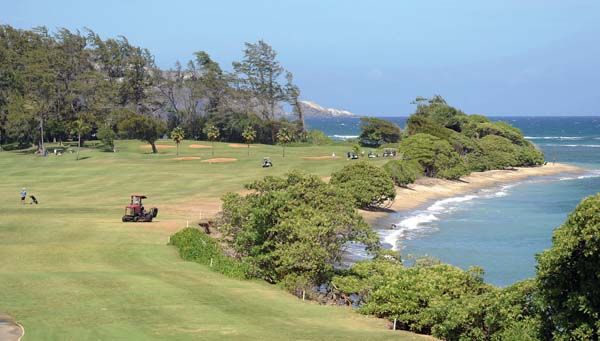 The 18-hole course spreads across 174.1 acres and sits at the end of Halewaiu Road, bordering the Waihe’e Coastal Dunes & Wetlands Refuge. It is the cheapest course to play on the island — with county residents paying $13 for 18 holes on weekdays and $18 on weekends. Seniors pay $8 and $12, and students pay $2 and $3, respectively.

Waiehu golf course was the first municipal golf links to open in the Territory of Hawaii on Jan. 1, 1930, according to The Maui News. About 130 golfers played on the opening day of the course, including then-Maui Board of Supervisors Chairman Samuel E. Kalama and future Chairman Eddie Tam.

“Sam Kalama planted a palm tree and then stepped to the first tee and drove a golf ball down the fairway,” the newspaper reported. “It is immaterial how far he drove it and in what direction. The big thing is that the action was the official opening of the first municipal golf links in the territory.”

Kalama was largely credited with building the course. It originally opened as a nine-hole, par 37 course and was one of four on the island at the time. The others were the Maui Country Club, the West Maui Golf Club and the Pauwela Golf Course.

“Bordering the sea, the course presents a real picture to the lover of nature and should prove a big tourist attraction to the island,” the newspaper reported.

The county runs the course through a memorandum of agreement with the state, which owns the land. Arakawa said there is interest by private operators, but the County Council would have to agree to the contract.

Raising prices would not be a viable alternative, according to the mayor. Rates would have to be increased four times to break even, which would put the cost higher than privately run courses on the island.

Prior to the address, 50 to 60 protesters held signs outside the entrance to the Maui Arts & Cultural Center parking lot. They expressed their displeasure with Arakawa’s remarks regarding the removal and crushing of rocks from Iao Valley after a massive flood on Sept. 13. The mayor said in a television interview: “There’s no such thing as sacred rocks.”

“You can’t expect that people aren’t going to be offended when you make thoughtless and callous remarks like that, especially people who are part of the aina,” said community activist Trinette Furtado, who is an aide to Council Member Alika Atay.

“Come clean. Don’t blame it on others or that emergency funds aren’t being released,” she said, citing the mayor’s “ineptitude” for the problem.

Later, inside McCoy Theater where the speech was held, Arakawa boiled down his plans to protecting shorelines; recycling wastewater; promoting the collection, storage and use of more renewable energy; creating more affordable housing and reducing homelessness; expanding sustainable agriculture; improving the economy and continuing to maintain and improve county infrastructure.

Arakawa said he has sought to end new developments on beaches and shorelines for the past 20 years by keeping them under county ownership.

“This is not a construction moratorium, but the fact is that developers won’t be able to buy and develop land that isn’t up for sale,” he said.

The county owns all 148 acres in Launiupoko and, along with the state, all the parcels from Ukumehame to Papalaua Beach Park. Unfortunately, one of his “great regrets” was not buying 880 acres at Olowalu when it was offered to the county for $8 million.

On the north shore, the county helped the Hawaiian Islands Land Trust secure 247 acres from Waihee River to Halewaiu Road. The county also owns 25 acres of former sugar cane land between Baldwin Beach Park and Lower Paia Park, which will become the North Shore Regional Park. Arakawa is also looking into acquiring as much coastline as possible along Hana Highway in East Maui, which includes expanding Hookipa Park and buying Maliko Gulch.

Two wastewater projects are moving forward in South and Central Maui. Wastewater from Kihei’s treatment facility will be used to irrigate 150 acres of land mauka of Piilani Highway near the facility, Arakawa said. The county is working to acquire the old Maui Pine wastewater line to transfer treated water from the Kahului wastewater plant to irrigate parks and state facilities in Kahului.

Both projects are in planning and design phases and should be operational in two years, Arakawa said. The projects eliminate the need for the county to inject 7 million gallons of treated wastewater a day into the ground.

The mayor did not address the lawsuit over or plans to deal with injection wells at the Lahaina wastewater treatment plant.

Affordable housing is the mayor’s “most immediate priority,” referencing one-bedroom, one-bathroom apartments going for more than $1,000 a month and the median price for a single family home at $655,000. He proposed creating an affordable housing fund that would draw 3 percent of county property taxes for affordable apartment buildings, duplexes, townhouses and other dwellings.

A housing project on Lanai also is in the works following a door-to-door survey of more than 400 households, the mayor said. Results indicate that multifamily affordable rentals and homeowner education are desirable.

Other proposals offered by the mayor:

• The county is looking at trading in as many of its vehicles as possible for electrical or plug-in hybrid electric vehicles, Arakawa said.

• Expanding agricultural parks is a top priority with the end of Hawaiian Commercial & Sugar Co. operations. The mayor said the county is looking at purchasing 869 acres of old sugar land for the Kula Ag Park. The purchase also includes a 54 million gallon reservoir.

“These are our challenges here, and at the same time our opportunities,” Arakawa said. “Our future will depend on which path we take from here.”

Alicia Wintermeyer of Lahainaluna lines up a shot during the Lunas’ 21-7 win over King Kekaulike on Thursday at Sakamoto Pool. GLEN PASCUAL photo

Baldwin High School’s Kaipo Haole slides into third base as Lahainaluna’s Anu McCabe awaits a throw in the fourth inning of the Bears’ 7-0 victory over the Lunas on Thursday. The Maui News / MATTHEW THAYER photo

Wailuku resident Tom Pollard shows off an autographed Toto record he found Tuesday at Savers. The thrift store was packed with customers seeking bargains before it closes its doors for good Monday. The Maui News / MATTHEW THAYER photo

This is the new Maui Humane Society logo

State Land Use Commission members and other attendees of Thursday’s site visit of the Pi‘ilani Promenade walk past a stack of drainage culverts, which have been stored on the site for years, ever since the previously proposed project was scrapped. The Maui News / MATTHEW THAYER photo