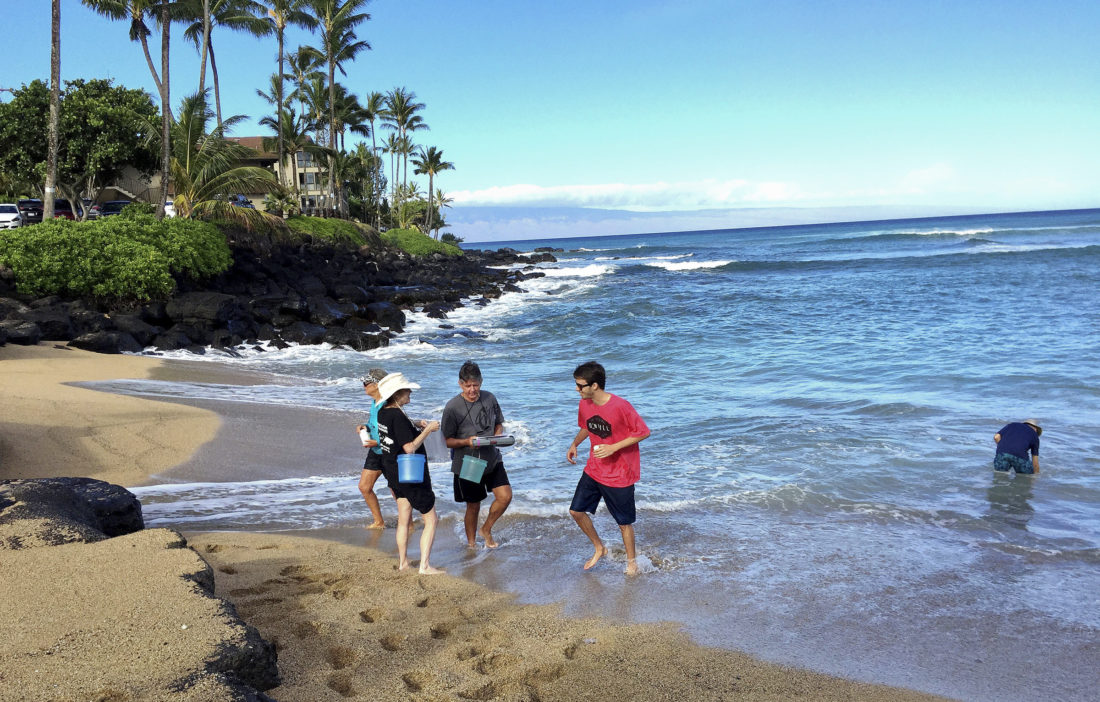 A groundbreaking scientific data collection program to expand the measuring of water quality off 18 West Maui shoreline sites has been forged between the state Department of Health and Maui community groups involved in the protection of the island’s nearshore waters.

The Quality Assurance Project Plan was developed by The Nature Conservancy; Maui Nui Marine Resource Council, a community group involved in protection of nearshore waters; and the state Health Department, said a news release Friday. The coordinated program will expand the gathering of data beyond the single Health Department employee responsible for all water-quality monitoring on Maui.

This is a groundbreaking, first-of-a-kind agreement in Hawaii, said Emily Fielding, Maui marine program director with the Conservancy on Tuesday. The Health Department signed off on the program Feb. 28.

To build capacity for collecting water samples, the Conservancy, the marine resource council, the West Maui Ridge to Reef Initiative, a group of agencies and organizations focusing on the protection of coral reefs, and the University of Hawaii joined forces to launch Hui O Ka Wai Ola, a citizen science program that was involved in the development of the QAPP.

Hui volunteers will be following the QAPP’s strict monitoring methods and allow the data collected to be integrated with information from the state Department of Health, according to the news release. The data collected will include sampling for the bacteria enterococcus, a fecal pathogen indicator, and nutrients such as nitrogen and phosphorous from runoff, which can damage coral reefs and fish habitats, the news release said.

The QAPP also calls for the collection of data on ocean salinity, acidity content, temperature, dissolved oxygen and suspended sediment in the water, the news release said.

Although the announcement was made Friday, Hui volunteers’ collection of data under the QAPP standards began in June after receiving a verbal OK from the Health Department, which was giving the plan its final review at the time.

“Hui O Ka Wai Ola helps us by providing more samples on Maui that we can use to assess changes in water quality,” said Okubo in the news release. “It’s a good idea to build up our community’s expertise and understanding of water quality issues, and having access to trained community members who can accurately assess water quality could help extend our capacity in case of an emergency.”

In addition to increasing the data collection, Fielding said that it was important to develop the stringent scientific data collection procedures and to do it collaboratively with the state to eliminate arguments over the quality and accuracy of the information gathered.

The goal is to “not get bogged down” in the accuracy of the data and to focus on identifying coastal areas with problems and to bring attention to needed changes, Fielding said.

The Hui’s volunteer team leader, Dana Reed, said that her group’s goal is “to supplement DOH water-quality monitoring and, in doing so, create a more complete picture of the status of Maui’s nearshore waters.”

“We’re excited to be able to take steps that will help us understand and address Maui’s brown water events and other water impairment problems,” said Reed, a scientist with the marine resource council.

The focus will be on 18 sites from Papalaua to Napili Bay, said Fielding. Of the 18 sites, 11 also are Health Department monitoring sites.

“Sites were chosen because they have important coral reefs, and community groups and agencies that care about managing them better,” Fielding said. The plan built on “the same community groups, the same people, taking it a step further.”

The 15 Hui volunteers, under Reed’s direction, are sufficient to monitor the 18 sites, but when five more sites, which will take monitoring to Honolua Bay, are added when funding becomes available training for five more volunteers will be needed to collect and process samples, Reed said.

In addition to data collectors, the Hui is recruiting volunteers who can help with sampling during brown-water events, bookkeeping, lab work and working with school groups, said Reed.

Sampling will occur Tuesday through Thursday; on Thursday afternoon and Friday the sediment samples will be processed in the lab at Lahainaluna High School. Nutrient samples will be shipped to Oahu for processing at the UH SOEST Laboratory for Analytical Biogeochemistry, Reed said.