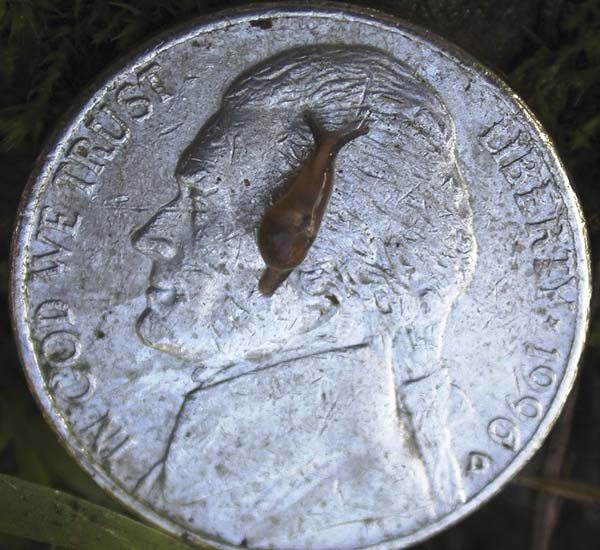 A baby semi-slug is shown on a nickle. Snails, slugs and certain other animals (including freshwater shrimp, land crabs, and frogs) can become infected by ingesting the larvae of the rat lungworm. -- Hawaii Department of Health photo

There are six confirmed cases of the rat lungworm disease from Maui, with an additional three cases on Maui currently under investigation, a state Department of Health official said Friday afternoon.

Spokeswoman Janice Okubo said that the confirmed cases involve four Maui residents and two visitors to the Valley Isle. The Maui News has learned the visitors are a man and a woman from Northern California.

In the past, Maui has only had two cases of the disease, one of which was confirmed in 2010, a health official said earlier this week. The recent cases have been reported on Maui over the past several months.

Earlier this week, health officials said there were six cases reported that were tied to Maui and a seventh involving a Maui resident who said she contracted the parasite on the Big Island.

The disease is commonly spread through contact with the invasive semi-slug, which is prevalent on the Big Island, where the vast majority of cases are reported in Hawaii.

State Sen. J. Kalani English, whose district includes East Maui, said in a community action alert Wednesday that the disease is actually on the Valley Isle. He advised residents to take immediate action. He noted that patients exposed on Maui were in Hana.

Rats host the worm and pass larvae through their feces. Slugs feed on that, and they contaminate fruits and vegetables eaten raw by humans, who then become infected.

The infection can cause a rare type of meningitis that causes severe headaches and stiffness of the neck, tingling or painful feelings in the skin or extremities, low-grade fever, nausea and vomiting, according to the Health Department’s Disease Investigation Branch. Temporary paralysis of the face also may occur as well as light sensitivity. There is no cure for the disease.

Okubo said that the parasite has been found in slugs and snails on Oahu, Maui, Kauai and Hawaii Island. Potentially, the Maui cases have been from multiple areas of the island as well as areas on Hawaii Island, she said.

So far this year, there have been three confirmed Hawaii Island resident cases, and there is currently one case under investigation on the Big Island, she said.

On Thursday night, the Maui Invasive Species Committee and state Department of Health held a community meeting at Helene Hall in Hana to address concerns over the recent outbreak of rat lungworm disease in East Maui.

MISC manager Adam Radford, who was not at the meeting, said that a staff member attended. He said that the meeting drew around 150 people. Officials said it was a standing-room-only crowd.

“There were a lot of questions about how to best protect themselves from the disease,” Radford said.

He added that what came out of the meeting was a discussion from the landscaping and agriculture community on how best to prevent the movement of the semi-slug.

The University of Hawaii College of Tropical Agriculture and Human Resources will work with East Maui farmers on how to mitigate the risk of the disease, Radford said.

He added that taro farmers, especially, were worried about whether the parasite was present in the water in which they grow their crop, which he said is a possibility.

There will be more outreach to the medical community on how to identify and treat the disease, he said.

Radford said that MISC is supporting the effort to assess the extent of semi-slugs on the island.

“We know it is in East Maui. Where else it will be, that we don’t know,” he said.

As for the tests of suspected cases, Okubo said: “We cannot definitively confirm how each person became infected, but we know that people can acquire the parasite by consuming raw or undercooked snails and slugs. Testing for the disease is challenging and requires spinal fluid from the sick person.”

Tricia Mynar, the administrator for Kamehameha Schools Preschool, who travels a lot for work, is the Maui woman who said she was on the Big Island when she contracted the parasite.

She was admitted to Maui Memorial Medical Center on March 14 after visiting the emergency room. She was released March 21. But she is struggling to deal with the disease, saying, “every day is different.”

On Friday, she reported a pain level of six on a scale of one to 10 in her head. Friday’s pain was consistent.

But on the previous three days, her headache levels were a mere one or two and pain was less consistent. Then the pain climbed to six Thursday night.

“I can be watching television, then boom,” she said.

She cannot sit up straight and always has to have her body propped at a certain angle because of the pain. She uses a walker, but it may be tough at times with tremors she suffers because of the disease affects the central nervous system.

Until she came down with the disease, Mynar moved around normally and was a self-proclaimed workaholic. She lives with her parents in Pukalani.

Mynar said that, at first, she thought she the flu because she had flulike symptoms such as body aches. Then, she felt pain in her foot as if she had been stung by a fire ant. She said she thinks it could have been a nerve snapping.

As far as people fearing eating produce, she said people should all slow down and not rush.

“Take your time and wash your veggies,” she said.

“We want to assure the public we are producing safe food,” he said.

Watanabe said everyone needs to take precautions because farmers already do. Residents need to be vigilant of what they have in their home and school gardens.

“Farmers and the community should work together and be educated to minimize the risk from this disease,” he said.

“I hope people really understand it’s in their hands to prevent infection by properly washing all of the produce . . . regardless where they buy it from,” she said.

“The focus has been on farms and consumption of produce, but really the disease can be spread in so many different ways,” said Vasconcellos, whose organization includes Hana Fresh, an organic farm, nutrition center and farm stand.

Kids racing slugs and snails in the yard may be at risk of contracting the disease, and people working with trash and green waste also should be cautious.

“Everyone needs to be vigilant about it and take precautionary measures. Hopefully that will stop any major problems with this disease,” she said.

Vasconcellos said that the clinic’s farming operation and farmers market have been “going fine.”

The Hana Health staff eats everything from the farm every day, she said.

“We are all good to go,” she said. “We always wash everything.”

Staff members are vigilant, keeping an eye out for every pest on the farm, she said.

Okubo said the disease’s most common symptoms include a severe headache and neck stiffness, but symptoms vary widely. The signs and symptoms are listed on a fact sheet at health.hawaii.gov/docd/files/2015/07/angio-fact-sheet-20150716.pdf.