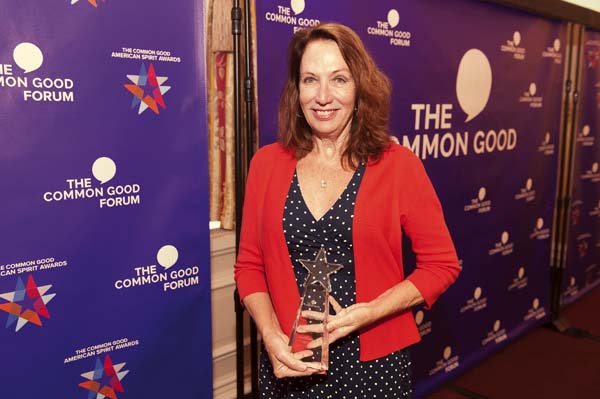 The marches may have ended but the movement has just begun.

Hana resident Teresa Shook — the grandmother who ignited the Women’s March movement — plans to host talk-story sessions in every state to inspire others to make a difference in the world.

“There’s so much negativity in the news and I understand it’s challenging and people get burnt out, but we can balance that with what’s good,” she said Saturday. “People need hope, and these stories would give them hope.”

Shook has been doing interviews and accepting awards ever since she created a Facebook event in November encouraging people to protest Donald Trump’s election. More than 500,000 people joined her in the nation’s capital in January, with another 2 million people participating in more than 600 marches worldwide.

The Common Good, a nonpartisan public advocacy group in New York City, honored Shook this month alongside Arizona Sen. John McCain and former Secretary of State John Kerry. She received the American Spirit Award for Citizen Activism with the headline “One Woman Posts — The World Responds.”

“I was floored because the other two recipients were John McCain and John Kerry,” Shook said. “I was really overwhelmed with emotion. That whole event was amazing.”

The theme of the event was “Our Nation at the Crossroads,” and organizers sought to gather the brightest thinkers in the United States to spotlight public policy choices and to “bolster American democratic values.” Legislators, experts and news outlets participated in a forum discussing topics such as the press under fire, global threats and the growing economy.

Shook spoke to the crowd upon receiving her award.

“I was an unknown to these people, but I got some really good feedback,” she said. “So many people came up and thanked me. I accepted the award for myself and on behalf of every marcher, because it would not have been possible without them.”

Shook said that her message focused on hope and she shared stories of what other people have done since the marches in January. She said that an 8th-grader from Chicago told her that she was so moved by the experience of walking with her mother, aunts and grandma that she is making a documentary to inspire other students.

“I told them, ‘Don’t despair, because those people who stood up had a ripple effect and it keeps rippling,'” Shook said.

The retired attorney has helped guide the movement into setting up Women’s March chapters in every state as well as gaining nonprofit status. She declined to serve on the board of directors but is heavily involved by answering emails and doing interviews.

Shook has recently held private talk-story sessions Upcountry and on Molokai, and plans to visit other islands in the state through the Women’s March nonprofit before heading to the Mainland. The newly formed group has just begun to raise funds and has no scheduled sessions.

“People are reaching out to me every day and telling me how the march changed their lives and what they’re doing differently to change the country,” she said. “These marchers see me as the mother of the movement, so they want to hear my story. But I’m just one person.

“The story the march started — that was just the beginning — now we have to tell their stories.”

For more information on the Women’s March — Hawaii, see womensmarchhawaii.com or www.facebook.com/womensmarchonwashingtonhawaii.