Police: Prais ‘struggled with officers,’ who were then forced to restrain and handcuff him 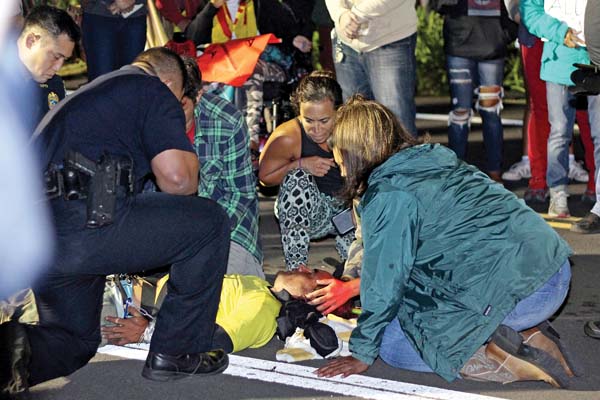 Protesters complained that police used excessive force Thursday after an incident that left 39-year-old David “Kai” Prais unconscious on the road during a protest against a convoy of telescope materials headed to the summit of Haleakala early Wednesday morning.

Witnesses at the scene alleged that an officer had his knee pressed against Prais’ face, and that Prais said he couldn’t breathe before going unconscious. But police said Prais “struggled with officers,” who were forced to restrain and handcuff him. Police arrested six people, including Prais, during the protest.

Paramedics took Prais to Maui Memorial Medical Center, where he was evaluated and released into police custody, according to Maui Police Department spokesman Lt. Gregg Okamoto.

Protesters said Thursday that they were frustrated not only with how police physically handled Prais, but also how long it took for him to receive medical attention.

“I think it’s very irresponsible of the Maui Police Department to not have some type of emergency response ready just in case,” Pukalani resident and protester Tiare Lawrence said. “I mean, if you’re going to take certain precautions and bring certain equipment and weapons, then they should’ve thought it out more appropriately.” 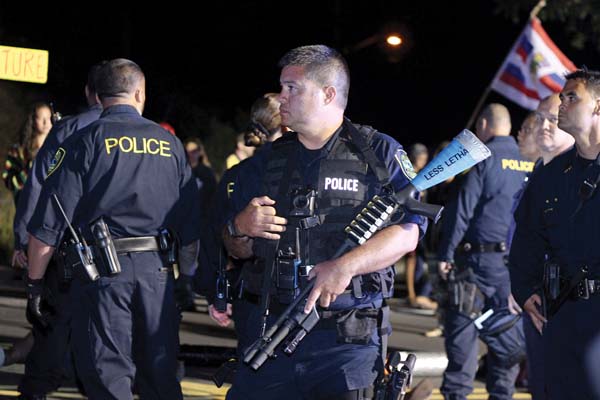 Police did not show up in riot gear as protest organizers requested, but one protester said she thought the riot weaponry was unnecessary and raised tensions. The Maui News / COLLEEN UECHI photo

Close to 80 people packed the triangle outside King Kekaulike High School from 6 p.m. Tuesday to nearly 5 a.m. Wednesday, though the numbers declined somewhat as the night wore on.

When the trucks carrying the telescope parts finally met the crowd at around 3:45 a.m., protesters set up lele, or altars, in the crosswalk and blocked off the area with yellow crime scene tape. About 10 protesters, including Prais, chained their wrists together in large tubes and spread out along the road.

Police gave multiple loudspeaker warnings in English and Hawaiian before approaching the crowd and carrying each protester in the human chain out of the path of the trucks, one by one. But after wriggling out of the tubes, some protesters slipped under the trucks and forced the convoy to a halt.

According to a statement from police, Prais got up from the ground, pushed past an officer and dove under the trailer of a moving truck. He grabbed onto a tire as the truck slowed to a stop.

“Police repeatedly ordered Prais to remove his grip on the tire, but he refused to listen,” the statement said, adding that Prais continued to resist and tried to run back under the trailer as officers pulled him away. They then put him on the ground and tried to handcuff him.

Lawrence said it was shortly after Kaleikoa Kaeo rushed in front of one of the semitrailers — which occurred just after 4 a.m. — that Prais started calling for help.

One hour and 26 minutes into a live video posted by Kako’o Haleakala, Prais can be heard shouting “Help!” repeatedly, then a muffled, “Get your knee off my head.”

Wailuku resident Charles Revard was next to Prais in the human chain. He turned his head and saw Prais lying on his back with a police officer’s knee pressed against his cheek.

“He was saying, ‘Help me, get off of me.’ He kept on saying that over and over and over again,” Revard told The Maui News shortly after the protest ended. “And then I asked him if he could breathe, and he said he couldn’t. And that’s when I started screaming, like, ‘He can’t breathe!’ “

Other protesters picked up what was happening and started shouting the same phrase. Lawrence said that’s when she ran up the road.

“I got there when he was screaming, ‘Help! Help!’ and that was when the cop had his knee on his face,” Lawrence said.

According to police, Prais refused commands and tucked his hands under his body, “causing officers to forcibly restrain him and pull his arms free in order to handcuff him.”

The scene in the video is dark, but a cluster of police officers is visible around Prais. Lawrence counted four officers, one with his knee on Prais’ face and the others holding him down and handcuffing him. After Prais has gone silent in the video, two officers can be seen lifting him up and carrying him down the road toward the triangle, his legs limp and dragging. Someone in the background yells, “Get an ambulance! Make sure he’s all right!”

Police said Prais “suddenly appeared to become unconscious” as he was carried down the road and placed on the ground by the triangle.

“He was on the ground unconscious, curled up in a ball in handcuffs, and nobody was doing anything,” Pukalani resident Sesame Shim said. “The cops just left him there.”

Lawrence said “it was several minutes before they finally let me go and assist him.”

About the time that Lawrence is seen checking on Prais in the video, an officer can be heard telling a protester that “the paramedics have been contacted. They’re on their way.”

Police said officers immediately radioed for an ambulance after placing Prais on the ground and remained with him until paramedics arrived. With the trucks gone, several people gathered around Prais, checking his vital signs and trying to get a response. At least 18 minutes passed between the time that Prais was dragged off and the time the ambulance came.

“It was quite a while to the point where we were all wondering where they were,” Shim said.

At around 4:30 a.m., an ambulance arrived and drove Prais to the emergency room. Maui Memorial spokeswoman Chastell Ely said Thursday that she couldn’t confirm Prais’ injuries without his consent. Kako’o Haleakala posted on its Facebook page late Wednesday evening that doctors diagnosed Prais as having sustained a concussion. Lawrence said that Prais was with Kaeo, who didn’t want Prais to make any statements until he could get a lawyer.

Kaeo and Kahele Dukelow, two of the protest organizers who addressed the crowd before the event, could not be reached for comment Thursday.

More than 60 law enforcement personnel from the Maui Police Department, Haleakala National Park and the state Department of Land and Natural Resources Division of Conservation and Resources Enforcement responded to the protest scene, according to state officials. Before and after the protest, police met with the crowd to ask who the organizers were and ask protesters “to consider obeying the law.”

Revard said afterwards that he “felt like I was handled pretty well” by police but that it appeared Prais “didn’t get that same experience.”

Shim declined to comment on the officers’ actions, but Lawrence said she thought they used too much force, “especially when it came to the handling of Kai.”

“He’s not a big man, so for them to have several police officers on him the way they did was completely unacceptable,” she said.

She said organizers asked police not to show up in riot gear, which they did not, but Lawrence thought the “riot weapons” raised tensions.

Okamoto told The Maui News Thursday that “there is no investigation at this point,” but that police would launch one if someone filed a complaint. When asked whether police would investigate without a complaint, Okamoto said it “depends on what we find through our own review of the case.”

The statement from police said that officials reviewed reports and video of all the arrests and that “preliminary findings show that officers acted within department policy and procedure and the scope of their training.”