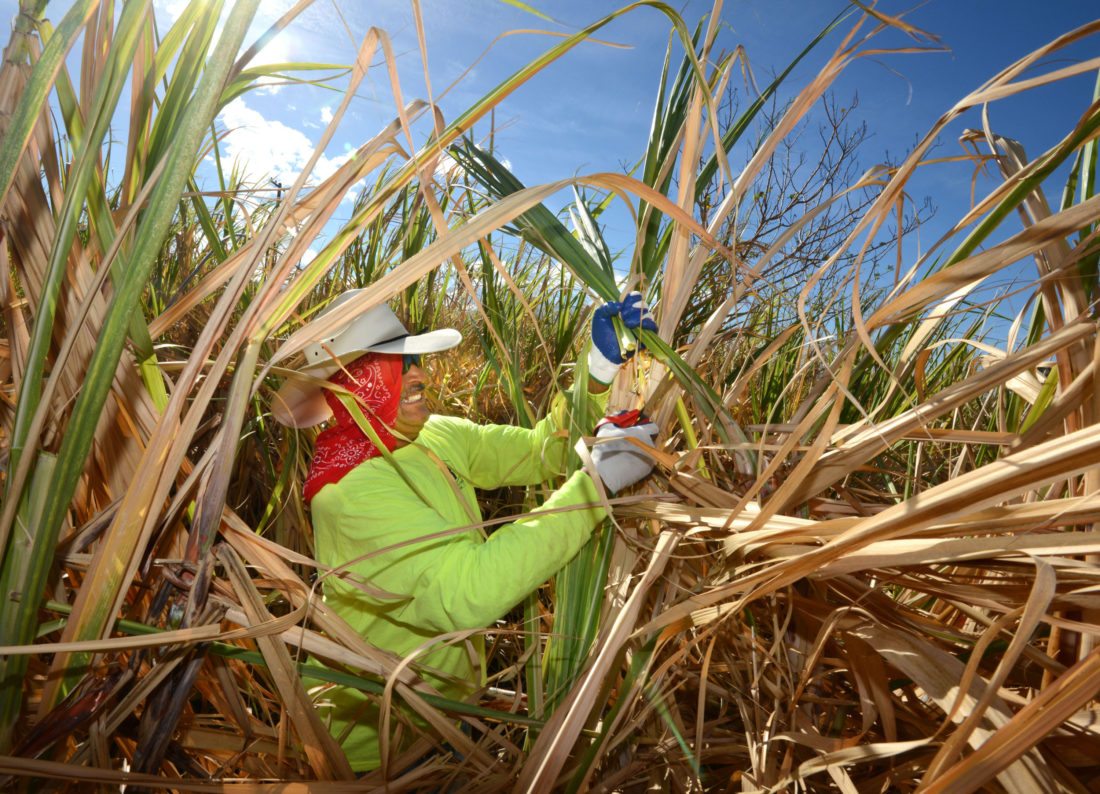 Sugar cane may no longer be processed at the Puunene Mill, but one Hawaii island nonprofit found a use for the leftover stalks still dotting the Maui landscape.

Ahu’ena Heiau Inc. and a group of Maui volunteers spent Saturday stripping 40,000 sugar cane leaves to ship to Kona, where they’ll be used to help restore an ancient hale that served as Kamehameha the Great’s final place of residence.

“We’re here because, on our island, we don’t have sugar cane leaves in abundance anymore,” said Kenneth Nainoa Perry, a kupuna consultant and former board member of Ahu’ena Heiau. “We were blown away by the enthusiasm, the support and the hard work that everybody put in. . . . We gave two days to do this project, but they accomplished it in one.”

The leaves will be used to thatch a hale that occupies the Kamakahonu National Historic Landmark at the edge of Kailua Bay. Ten feet wide, 20 feet long and 13 feet high, the hale nana mahina’ai is modest in size but large in significance.

In 1812, King Kamehameha I left Honolulu to return to Hawaii island, according to documents on the National Register of Historic Places. A local chief gifted Kamakahonu to Kamehameha, who then moved his court to the bay, where it would remain until 1820, shortly after his death. 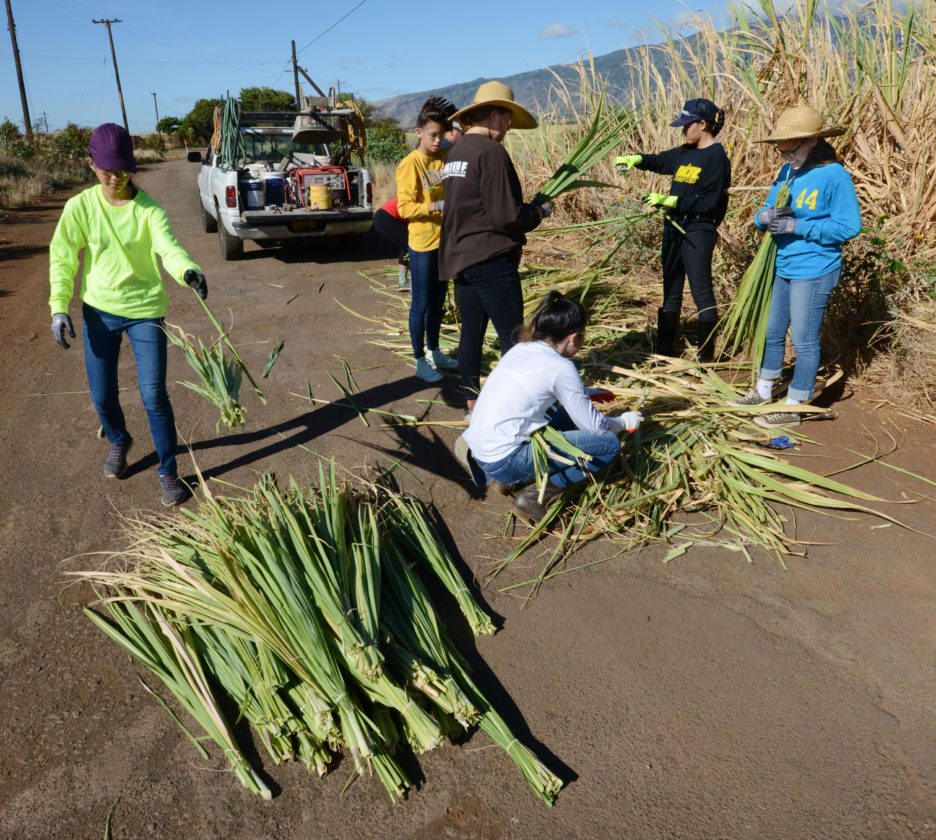 Sparks Basketball Maui players sort out usable leaves from piles carried out of the fields by their coaches. • The Maui News / MATTHEW THAYER photo

Kamakahonu became a place of residence, worship and governance for the king. Kamehameha had at least 11 structures built there, including his sleeping quarters, a men’s house, stone storehouses and the eating house of his favorite wife, Ka’ahumanu. The Ahu’ena Heiau was restored as the king’s personal temple and rededicated to Lono, god of agriculture and prosperity. At the heiau, Kamehameha reportedly held nightly secret council meetings with advisers, and would instruct his heir, Liholiho, in the ways of government.

Now, Ahu’ena Heiau oversees maintenance of the historic site. In 1976, all of the remaining structures at the heiau were restored for the first time, Perry said. The hale nana mahina’ai, the structure that the nonprofit is currently working on, was torn down about 15 years ago with the intention of rebuilding it. However, work stalled, and it’s been sitting unthatched ever since. The nonprofit decided that something needed to be done.

The hale nana mahina’ai was where the king would go to sleep, meditate and look out over his agricultural fields, which is how the structure got its name. Perry was one of the last men in Kona to learn the special technique of thatching sugar cane leaves that had been used to cover the outside of the hale.

“I remember the kupuna, the kahu that passed away, he kept emphasizing, ‘Nainoa, don’t ever change the thatching,'” Perry said. “A lot of places used loulu palms and pili grass, but this particular place (sugar cane leaves) were the thatching materials from day one. The kupuna told me to keep this going, to never change it.”

Based on Bishop Museum records from the 1970s, when the heiau structures were first restored, nonprofit members estimated that they would need about 40,000 leaves. And they knew they weren’t going to find them on Hawaii island, which hasn’t seen a sugar cane harvest since 1996, according to the Hawaii Agriculture Research Center. 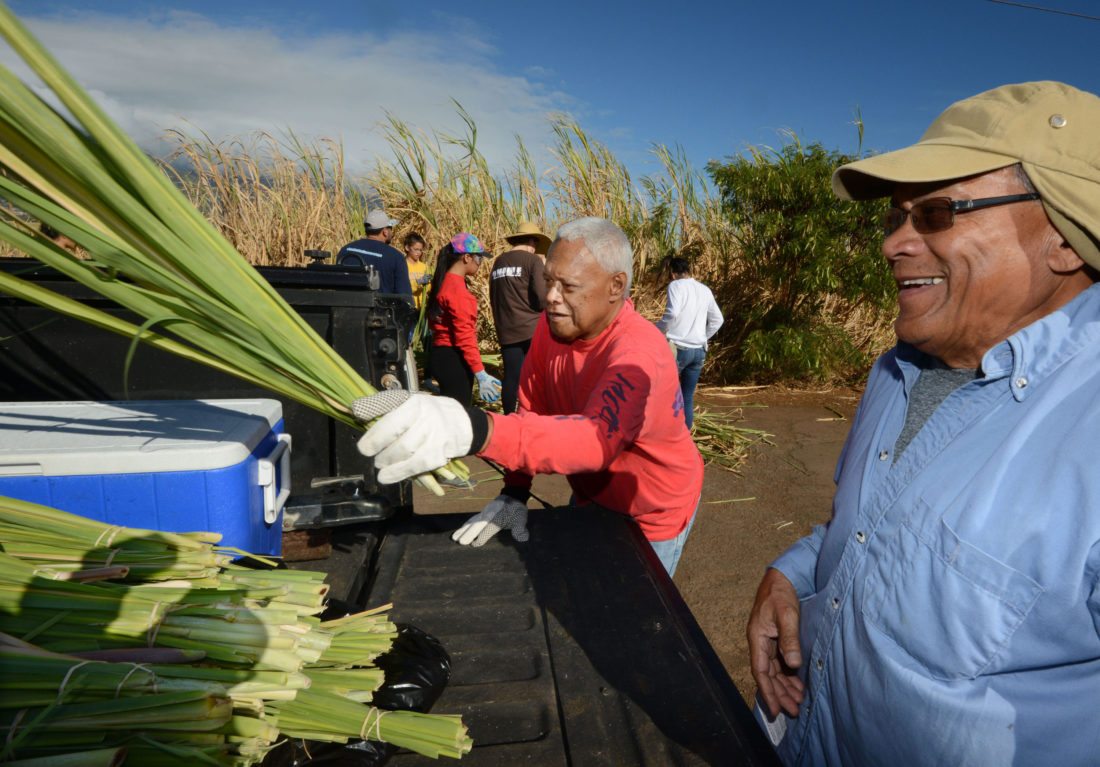 Royal Order of Kamehameha Kahekili Chapter IV members Herbie Kamoku (left) and Reggie Valle of Maui load bundles of sugar cane leaves into the bed of a truck Saturday in Puunene. They were part of a volunteer crew helping collect enough of the increasingly rare leaves for a Kona organization to weave the exterior of a hale nana mahina‘ai, a 10-foot-by-18-foot structure at Ahu‘ena Heiau on the Big Island. The hale was one of King Kamehameha’s working residences. • The Maui News / MATTHEW THAYER photo

So, they turned to the island that cultivated it last.

Since Hawaiian Commercial & Sugar Co. shut down in December, parent company Alexander & Baldwin has been mowing down remaining fields of sugar cane to keep them from growing out of control, said Mae Nakahata, A&B’s director for agricultural research. Eventually the plants will die, and native grasses will take over. But when Nakahata heard why Ahu’ena Heiau needed leaves, she was more than happy to help. It seemed fitting that Maui’s sugar cane leaves would go to a place of such agricultural significance, she said.

So, A&B allowed a plot of sugar cane to grow out so that the Big Island nonprofit could come and pick the leaves.

Perry also contacted the Royal Order of Kamehameha I chapter on Maui to see if the group could lend a hand. Member Carl Kaupalolo was surprised when he heard how many leaves were needed. But he agreed to help, and by Saturday more than 50 volunteers had been assembled, including Royal Order members, Rees Development workers and more than 40 players, parents and coaches with the Sparks Basketball Maui club.

At 8:30 a.m. Saturday, the group started collecting stalks, cutting leaves and stacking them in bundles. By 4 p.m., all 40,000 leaves had been piled into 80 garbage bags, ready to be shipped free of charge to Hawaii island, courtesy of Young Brothers. Kahului Trucking & Storage and Kona Trans also agreed to deliver for free.

“For us it’s just important to continue the cultural kinds of things we do,” Kaupalolo said. “We would love to help to restore that hale there to its rightful restoration that it needs, (while also) continuing the education for our community and our younger generation.”

Speaking of the younger generation, Kaupalolo said that he “was just awed by the sheer commitment” from the young basketball players and their families, who endured dusty, muggy conditions to get the job done.

Jacqueline Awa, treasurer and director of Ahu’ena Heiau, said that the nonprofit will likely start thatching the hale in about two months. The restoration is expected to finish in mid-December.

Awa and Perry said they would “never forget this experience on Maui” and that they were very grateful to all the volunteers and businesses that pitched in.

“Your Maui community really went over the top,” Awa said.

Hawaii Space Exploration Analog and Simulation crew members Laura Lark (left) and Ansley Barnard eat fresh fruits and vegetables after emerging from their habitat after eight months of living in isolation in a Mars-like habitat on Mauna Loa on Sunday. • University of Hawaii photo via AP

This photo released by the University of Hawaii shows Hawaii Space Exploration Analog and Simulation, HI-SEAS crew members, left, sitting for a news conference after emerging from their habitat on Sunday, Sept. 17, 2017, after eight months of living in isolation in a Mars-like habitat in Mauna Loa volcano, Big Island, Hawaii. The six NASA-backed research subjects were studied by researchers to understand better the psychological impacts of a long-term manned mission to space would have on astronauts. NASA hopes to send humans to Mars by the 2030s. (HI-SEAS V crew/University of Hawaii via AP)

Sparks Basketball Maui players sort out usable leaves from piles carried out of the fields by their coaches. • The Maui News / MATTHEW THAYER photo

Royal Order of Kamehameha Kahekili Chapter IV members Herbie Kamoku (left) and Reggie Valle of Maui load bundles of sugar cane leaves into the bed of a truck Saturday in Puunene. They were part of a volunteer crew helping collect enough of the increasingly rare leaves for a Kona organization to weave the exterior of a hale nana mahina‘ai, a 10-foot-by-18-foot structure at Ahu‘ena Heiau on the Big Island. The hale was one of King Kamehameha’s working residences. • The Maui News / MATTHEW THAYER photo