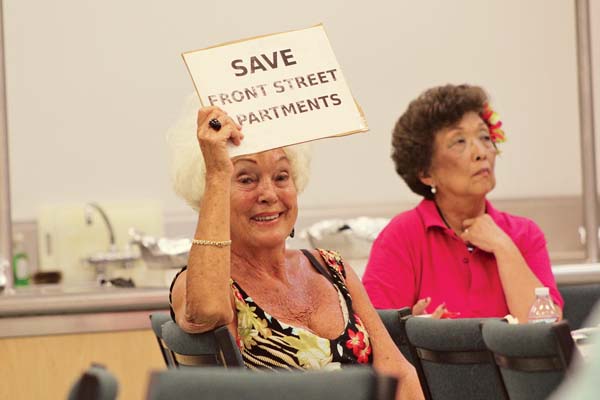 Barbara Henny, co-chairwoman of the Front Street Apartments tenants, shows her support for the affordable housing project in Lahaina during a West Maui Taxpayers Association meeting Tuesday. On Thursday, a Maui County Council committee recommended passage of a resolution urging the state to maintain the affordability of the apartments, where rents could rise to market rates in 2019. The Maui News / COLLEEN UECHI photo

WAILUKU — After hearing heartfelt testimony from worried tenants, a Maui County Council committee recommended passage of a resolution urging the state to save the affordability of the Front Street Apartments, where rent for units could rise to market rates by 2019.

Members of the Housing, Human Services and Transportation Committee voted unanimously for the resolution Thursday, although they thought the county’s work needs to go beyond that.

“It’s going to take more than just approving this today,” council Vice Chairman Bob Carroll said. “It’s going to take one-on-one talking to our legislators, actually going to Honolulu and making an all-out effort. The reso is fine because our foot’s in the door, but it’s not really the answer. The answer is us taking the time and making that extra effort.”

Earlier this year, Maui’s state lawmakers introduced bills to keep the apartments affordable. However, House Bill 1553 died in February, while Senate Bill 1266 made it to conference committee before being tabled in April.

The Senate bill would have directed the state and county to pay $250,000 each to fund negotiations between the government, project owner Front Street Affordable Housing Partners and landowner 3900 Corp. If negotiations to keep the apartments affordable through at least 2032 didn’t pan out, the bill would have allowed the state to purchase the property using eminent domain.

About 250 to 300 people live in the Front Street Apartments, a 142-unit affordable housing project that opened in Lahaina in 2001. The project, funded by the state and private developers, has allowed many tenants to make ends meet in West Maui, where average rents are the highest in the county.

“We’re just getting by, but we’re happy,” said Sharon Serafico, a retired teacher who’s lived at the apartments for 13 years. “If it wasn’t for affordable housing, it would be a lot different. . . . The Front Street Apartments gives a chance to people in need — good, hardworking people.”

Projects developed as low-income housing are supposed to be affordable for 50 years, said Carol Reimann, director of the county Department of Housing and Human Concerns. However, in 2012, the federal tax code was amended to allow investors to sell low-income projects after 14 years, explained Gary Kubota, who serves as a community liaison for the tenants. The change was supported by SunAmerica, one of the original developers of the Front Street Apartments.

When the project went on the market, the state was interested in buying it. But because it was selling for $15.4 million, above its appraised value of $8.7 million, the law prevented the state from making the purchase. Unable to find a buyer within a year, the project owners are now allowed to raise the rents by Aug. 4, 2019.

About 75 to 80 percent of apartment tenants are employed but won’t be able to afford rent if rates go up, while 15 to 20 percent are disabled, retired or living on fixed incomes, according to the committee resolution.

“Many tenants wanted to come today, but their disabilities and lack of transportation precluded their being here,” said Barbara Henny, co-chairwoman of the apartment tenants. “These people and many others like myself and other senior citizens on a fixed, limited income live on the financial edge. Many work two or more low-paying jobs and are facing the likelihood of homelessness should our rates be raised.”

According to the Hawaii Housing Finance and Development Corp., the ground lease for the property was going up, which could have impacted the project owners’ decision to sell.

Council members expressed frustration with the tax breaks granted to the project developers — under the impression that the project would stay affordable. The state and federal governments shelled out more than $1.5 million in tax credits, while the county provided “substantial real property tax subsidies,” committee Chairwoman Stacy Crivello said. Since 2001, tax exemptions for developers have totaled just over $2 million.

Council Member Elle Cochran, who holds the West Maui residency seat, supported the resolution but also wanted to consider the idea of taking the property through eminent domain and making the apartments affordable in perpetuity.

“I think kind of punting everything to the state — I mean, yay, let’s try anything, but I sure would like to see if we could do anything on our own home front to move an eminent domain idea forward,” Cochran said.

Council Chairman Mike White cautioned that the apartments could cost far more than $15.4 million, and the decision would fall to the courts.

“Eminent domain sounds like such an easy thing, but it’s not employed very often by the county simply because you’re making a decision without knowing what the price is going to be,” he said. “I think the best way to move forward is to get the pressure put on the state to provide the funding.”

State Sen. Roz Baker, whose district includes West Maui, said Thursday that she plans to introduce a new bill instead of trying to revive the one stuck in conference.

“What I think we want to do is make sure that we keep the property in the range for folks that are currently living there,” Baker said. “It may involve trying to require the new owner to accept some rent subsidy at a lesser amount than what they’re asking for. There’s a lot of balls up in the air.

“What we would like to communicate to our constituents is that this is a top priority. We think we have a pathway, and we’re going to continue to pursue it.”