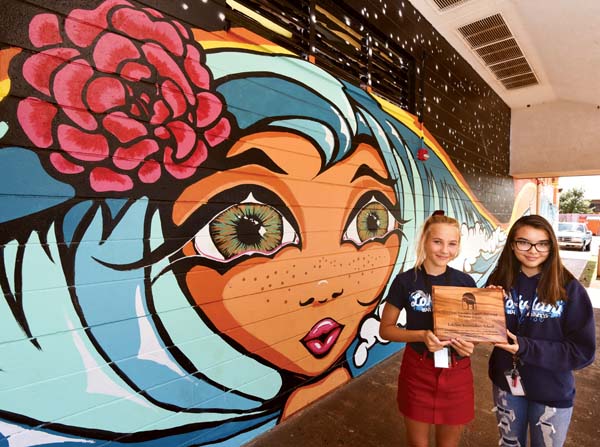 Lokelani Intermediate School 8th-graders Lily Oldham, 13, (right) and Austin Ruppenthal, 14, hold a plaque that was presented to the school along with a $5,000 check Wednesday by the The Hawai‘i Community Foundation, on behalf of the Cooke Foundation. Lokelani was one of three Hawaii schools honored by the foundation this year. The Maui News / MATTHEW THAYER photo

Lokelani Intermediate School was one of three public schools in the state to win 2017 Cooke Beautification Awards, and an assembly was held Wednesday on the Kihei school campus to present the award and the $5,000 check.

For the past 12 years, the Cooke Foundation has been supporting the award that recognizes projects that enhance the overall appearance and ambiance of public schools. An elementary, intermediate and high school are selected every two years for the awards.

“It’s important to us that we continue to honor and recognize Hawaii’s public schools and the students who have taken the time to make significant improvements to their school’s appearance and ambiance, ultimately enhancing an overall sense of school pride,” said Greg Wrenn, trustee of the foundation that funds community endeavors that make a difference in the betterment and welfare of the people of the state.

The Hawai’i Community Foundation is the Cooke Foundation’s grants administrator.

Cooke Foundation trustees were impressed by how students, teachers, staff, parents and the community worked together to create a mural at the entrance to the school, Lokelani officials said. Members of the 7th-grade student council initiated the project, which received support and encouragement from the school’s principal, Francoise Wittenburg, the news release from the Hawai’i Community Foundation said.

Lily Oldham, 13, and Austin Ruppenthal, 14, currently both 8th-graders, received the plaque and the check from foundation trustees at the assembly Wednesday. They came up with the idea for the mural, helped raise funds through donations, and organized the painting.

School parent and artist Jonathan Baldwin, or JoNerZ, lent his artistic touch to the project, which was finished last summer.

“The result is a stunning and colorful mural of a fictional girl named Lokelani, whose long hair represents the ocean, and upon which, wave riders, which represent the students, voyage through middle school and on to the next stage of their lives,” the news release said.

The other winners were Kohala Elementary School and Kohala High & Intermediate School, both on the Big Island. The contest received 10 nominations from public schools on Oahu, Maui and Hawaii island.

Since 2007, 23 public schools across the state have received Cooke Beautification Awards, including Haiku Elementary, Lanai High and Elementary and Lahainaluna High, twice.