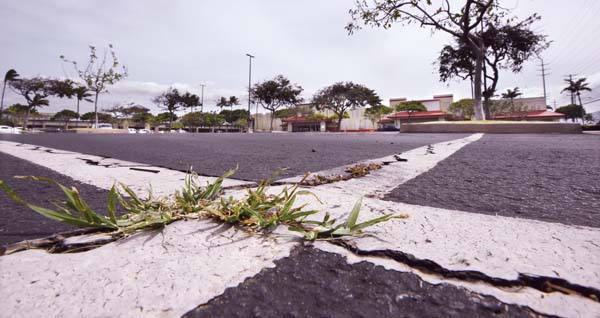 Weeds grow out of cracks in the Maui Marketplace parking lot Tuesday near the closed Sports Authority location. Unoccupied retail space last year at the Kahului shopping center contributed to a 21.69 percent vacancy rate in Central Maui, the highest ever, according to a Colliers International report. The Maui News / MATTHEW THAYER photo

Central Maui’s retail vacancy rate reached 21.69 percent, the highest ever recorded. And that came on top of the Central Maui vacancy rate of 14.44 percent for 2016, which was then a record.

The high vacancy rates ironically happened in a Maui retail market in 2017 that benefited from record numbers of visitor arrivals and spending, evidenced by Maui County’s growth of retail sales to $1.75 billion, an increase of 16.7 percent over 2016.

The Colliers report attributed the high retail vacancy rates in Maui’s most populous region to the closures of Sports Authority and Kmart and the relocation of Lowe’s from the Maui Marketplace to its new store in the Maui Business Park.

“These big box closures and relocations resulted in more than 114,000 square feet of negative net absorption for Central Maui in 2017,” the report says.

According to the report’s statistical table, Central Maui had an inventory of 1,373,225 square feet of overall retail space in 2017 and 297,841 square feet of available space. The average low asking price for rent (per square foot, per month) in the region was $2.47, the lowest on Maui, and the average high asking rent was $3.36, also the lowest.

While Central Maui had the most available vacant retail space as a percentage, West and South Maui also recorded higher vacancy rates, the report says.

“Surprisingly, despite the heavy concentration of hotels, resorts and timeshares in both of these markets, and the corresponding boost in visitor counts and visitor expenditures for the year, retail vacancy rates still increased,” the Colliers report says.

The report also noted that retail rents for West and South Maui went up, despite rising vacancy rates.

Colliers analysts said that a “contributing factor” to the higher average rent in South Maui was a 25,945-square-foot vacancy at Wailea Village that had an asking price range of $6 to $7.50 per square foot per month.

The report accounted for West Maui’s Lahaina Gateway Center losing the Barnes & Noble national bookstore chain. The announcement of the closure was made in the fall, but the store, which relocated to the Maui Marketplace in Kahului, did not close until March.

“Economists forecast that Maui’s economy will continue to improve, albeit at a slower pace than that of 2017,” the report says. “Both job growth and air passenger arrivals are anticipated to surpass 2017 levels. With guarded optimism, Colliers forecasts that Maui’s retail market will generate occupancy growth for 2018 and that its vacancy rate will begin to trend downward.”

The report, however, doesn’t take into account recent development activity by Alexander & Baldwin Inc., which has been cementing its position as a growing Maui retail property owner.

In March, A&B broke ground on its 94,000-square-foot Ho’okele Shopping Center, located near Kahului Airport and the gateway to its Maui Business Park. Plans call for the new shopping center to be anchored by a 57,400-square-foot Safeway grocery store, expected to be completed by the second quarter of 2019.

And, in February, A&B announced that it had acquired the nearby Pu’unene Shopping Center, anchored by Target, as part of a $254 million, three-property deal with California-based Terramar Retail Centers. The other Hawaii retail properties that were part of the acquisition were Laulani on Oahu and Hokulei on Kauai.

The Colliers report also looked at investment sales properties in 2017.

A statistical table shows that there were four Maui resort/golf property transactions, amounting to $365,507,020, a 74 percent increase over the $210 million sales volume from one transaction in 2016.

The report notes the $9.9 million sale of 339 acres in Paia from the now defunct Hawaiian Commercial & Sugar Co. to EC Paia LLC in February 2017.

Also exchanged last year was 18,396 square feet of industrial space at 250 Lalo St. in Kahului for $6.75 million from James Pappas to Taihook Associates in August.

The Colliers report anticipated the $1.1 billion sale of the Grand Wailea resort to the Blackstone Group, which was announced to close as of Tuesday. The report also mentions the anticipated sale of the 301-room Andaz Maui at Wailea by Host Hotels, which was expected to be completed near the end of March.

Those two sales should make 2018 another “strong year” for real estate investment on Maui, the report says.

Looking at Maui’s office market, the report says that, for the first time in eight years, there was positive occupancy growth, with a gain of 17,340 square feet of tenancy in 2017. Office vacancy rates dropped from 20.35 to 17.33 percent from 2016 to last year.

“Of Maui’s three office submarkets, Kihei has been slow to recover from the Great Recession,” the Colliers report says. “After a period of over-development, the Kihei market struggled to find tenants in the years following the recession.”