With Kilauea’s lava shooting skyward, ‘it sounds like a war zone’ 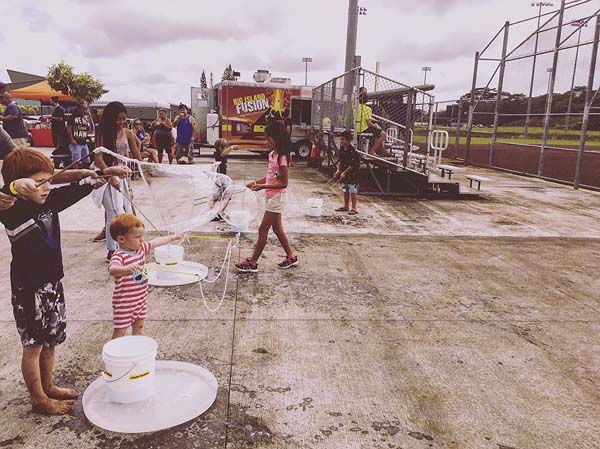 Seven-year-old Kapila and 1-year-old Nimai play with bubbles on the grounds of the Pahoa Community Center. The brothers are staying with two other siblings and mom Avani Love after lava from the Kilauea eruption destroyed their family’s home in Leilani Estates. The family had just moved from Maui to Hawaii island in April.

For several days, 29-year-old Avani Love has been going to sleep to the sights and sounds of red-hot lava shooting skyward.

“The past three nights, it sounds like a war zone,” Love said last week from the Pahoa Community Center, where she’s taken shelter. “You can see the fiery sky. . . . It sounds like bombs are being dropped. You can hear the ground shake. It’s pretty intense.”

Love’s hanai grandparents’ home in Leilani Estates is one of at least 40 structures destroyed so far by the Kilauea eruption that began on May 3. As lava continues to spread throughout lower Puna, Love and her four children — who moved from Maui to the Big Island in April — are now among the hundreds of displaced families stuck in limbo, waiting to see where the lava goes next.

Over the weekend, the Hawaiian Volcano Observatory reported a 22nd fissure, and lava flows reaching the ocean created lava haze — “laze” — a hazardous mix of hydrochloric acid and steam with fine glass particles, according to Hawaii County Civil Defense. On Saturday, flying lava spatter hit a man standing on his third-floor balcony and shattered the lower portion of his leg — the first reported injury related to the eruption.

Although the ash fall and gas emissions have prompted continued warnings from Hawaii County Civil Defense, Maui County doesn’t appear to be at risk, according to state and county officials. Janice Okubo, spokeswoman for the state Department of Health, said Monday that with normal trade winds, the department doesn’t anticipate Maui or other islands being affected by gases. Southerly winds, however, could carry vog up the island chain. 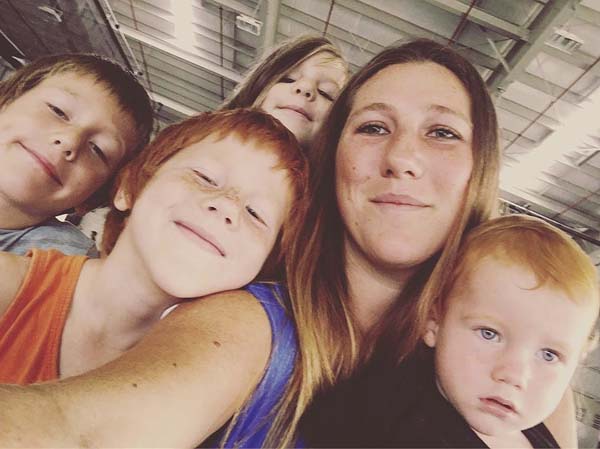 Avani Love (second from right) snaps a photo with her three sons and daughter, who range in age from 1 to 9, at the Pahoa Community Center where they’re temporarily staying. The kids have been “very resilient,” Love said.

“Our staff does not expect levels of SO2 (sulfur dioxide) to increase or reach Maui, since SO2 gas will dissipate before reaching Maui and/or the chemical composition will change from a gas to particulates,” Okubo said in an email.

On Monday afternoon, the University of Hawaii at Manoa’s Vog Measurement and Prediction Project showed winds carrying sulfur dioxide gases southwest of Puna and away from the rest of the islands.

But at the Pahoa Community Center, it’s not so much the gases that bother Love but the uncertainty of what’s next.

Born and raised on Hawaii island, for the past few years Love had been living in Wailuku, where her two oldest sons attended Waihee Elementary. But with the high cost of living and family members urging her to come back, Love decided to bring her four kids to her grandparents’ home at the beginning of April.

May 3, the day the first fissures cracked open, was beautiful and sunny, Love said. Family members had a potluck with friends. They went for a walk through her grandfather’s 1-acre garden. 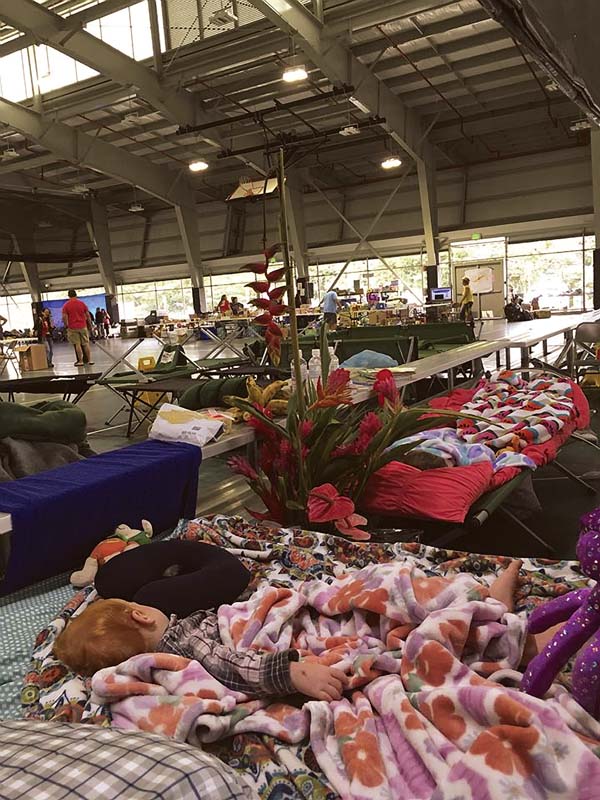 Cots and benches form the temporary living spaces for displaced families staying at the Pahoa Community Center shelter. According to the American Red Cross, 81 people are staying inside the center, while another 140 are camping outside in tents or cars.

“I remember seeing and thinking, ‘Wow, this is so peaceful,’ “ Love said. “I can’t believe we’re able to be in this place.”

Then Love got back to the house and was hit with a barrage of messages from “everybody and everyone who knew me,” telling her to get out of Leilani Estates. Her grandmother protested, believing they were a safe distance away and worried about looters. But when Love heard alarms going off and saw neighbors and cars “pouring down the road,” she decided she couldn’t take any chances. She packed some overnight bags and caught a ride with friends out to Hilo.

For a few days, she bounced around friends’ homes until she got the bad news — her grandparents’ home had been consumed by lava. Her grandparents were safe, but they didn’t have time to grab anything in the evacuation. When they tried to return, it was too late. Lava was creeping out of the neighbor’s yard, and the house was already up in flames.

Love said she and her family basically have “just the clothes off our back.” They lost everything from expensive medicines to a treasured scrapbook that her son made at Waihee Elementary.

When she found out everything was gone, “I couldn’t do it anymore,” Love said. She took the kids to the community center, where they’ve been ever since. There’s plenty to keep them occupied — a playground, snacks and plenty of animals. The kids, who range in age from 1 to 9, just think it’s “a really fun vacation.”

“They’re very resilient children,” Love said. “As long as we have each other, we feel content.”

And, the community has made the best of a bad situation. On May 9, word got out that it was Love’s son’s birthday. The community rustled up plates and forks, arranged for music and face painting, and brought six or seven cakes. A friend who evacuated from Leilani Estates donated 400 McDonald’s meals to three different shelters in the area.

“The community just really banded together,” Love said. “Everybody greeted him and gave him something for his birthday. The community has been nothing but ‘wow.’ “

Of the three American Red Cross shelters in the area, the Pahoa Community Center is the largest, with 81 residents inside and 140 more camping in tents and cars, the Red Cross said on Sunday.

Volunteers, county officials and first responders have had their hands full over the past two weeks, and other counties have been pitching in. An incident management team made up of 14 firefighters from Maui County will be on Hawaii island this week to help with air quality monitoring, search and rescue, medical aid, logistical needs and evacuation, said Herman Andaya, head of the Maui Emergency Management Agency.

Andaya was also on Hawaii island over the weekend to visit the emergency operations center in Hilo and see several lava sites.

“At one site, there was like a 20-foot-high lava flow,” Andaya said. “I was kind of taken aback by that. . . . At one point, there was a really loud explosion, and we had (Army National Guard) people with us. They were all yelling, ‘Get back! Get back!’ “

Andaya also said there wasn’t a heightened risk for Maui from gases in the air, or potential earthquakes or tsunamis.

“We’re always on alert,” he said. “But it’s not to the point where we’re telling people not to go to the beach or we’re evacuating tsunami inundation zones. Our alert is not heightened as a result of what’s happening.”

Andaya said it’s a good reminder for people to “be prepared for any kind of emergency,” especially with hurricane season on the way.

“Get an emergency kit ready, make a plan and stay informed,” he said. “We shouldn’t necessarily be prepared just for a tsunami.”

Love said she’s contemplating staying with relatives in various parts of the island, but it all depends on the lava.

“Since coming to the Big Island, it has felt so right,” Love said. “That whole month really sunk in for me that this is home and this is where I want to be. I’m still holding onto that.”

To donate to Love and her family, visit gofundme.com/help-single-mom-w-4-kids-displaced.

For a list of other fundraising campaigns to support people displaced by the volcano, visit gofundme.com/cause/hawaii-volcano.

Other organizations collecting funds for affected residents include:

People take pictures on a boat tour as lava enters the ocean, generating plumes of steam and ‘laze’ near Pahoa, Hawaii, on Sunday. Kilauea volcano, which is oozing, spewing and exploding on the Big Island, has gotten more hazardous in recent days, with rivers of molten rock pouring into the ocean Sunday. AP photo

Jack Jones, visiting from Madison, Wis., takes pictures at a country club in Volcano, Hawaii, as a huge ash plume rises from the summit of Kiluaea volcano Monday. Kilauea has burned some 40 structures, including two dozen homes, since it began erupting in people’s backyards in the Leilani Estates neighborhood on May 3. About 2,000 people have evacuated their homes, including 300 who are staying in shelters. AP photo

Seven-year-old Kapila and 1-year-old Nimai play with bubbles on the grounds of the Pahoa Community Center. The brothers are staying with two other siblings and mom Avani Love after lava from the Kilauea eruption destroyed their family’s home in Leilani Estates. The family had just moved from Maui to Hawaii island in April.

Avani Love (second from right) snaps a photo with her three sons and daughter, who range in age from 1 to 9, at the Pahoa Community Center where they’re temporarily staying. The kids have been “very resilient,” Love said.

Cots and benches form the temporary living spaces for displaced families staying at the Pahoa Community Center shelter. According to the American Red Cross, 81 people are staying inside the center, while another 140 are camping outside in tents or cars.