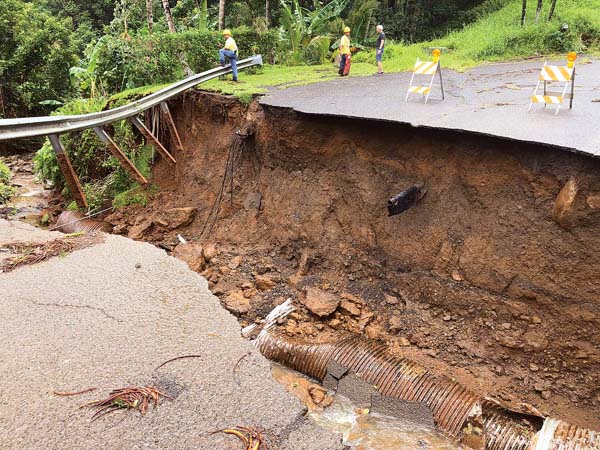 A gaping hole is left Saturday morning on Puu Way in Haiku after a culvert collapsed from flooding caused by rains brought by Tropical Storm Lane, which weakened as it neared Maui County on Friday afternoon. The damage also took out a county waterline. By Saturday, the storm was breaking apart as it veered west into the open Pacific, and the National Weather Service canceled all storm warnings for the state. -- Image by Richard Pechner/rpechner.com

Hurricane Lane weakened to a tropical storm as it skirted Maui County Friday and Saturday, leaving damaged roads and downed power lines, but not the catastrophic damage that the once Category 5 hurricane would have inflicted if it had remained at full strength.

After menacing the islands for most of last week, Tropical Storm Lane began breaking apart as it turned west into the open Pacific and left relieved residents with plenty of cleanup work. The National Weather Service canceled all storm warnings for the state, although a flash-flood watch remained in effect for all islands through this afternoon. A small-craft advisory continued for Maui County waters, with seas forecast at 6 to 10 feet, through 6 p.m. today.

No storm-related deaths were reported statewide, although Big Island authorities said they plucked families from floodwaters and landslides closed roads.

During the storm, wind gusts on Maui were reported up to 50 mph, but on Saturday winds had diminished to about 11 mph. 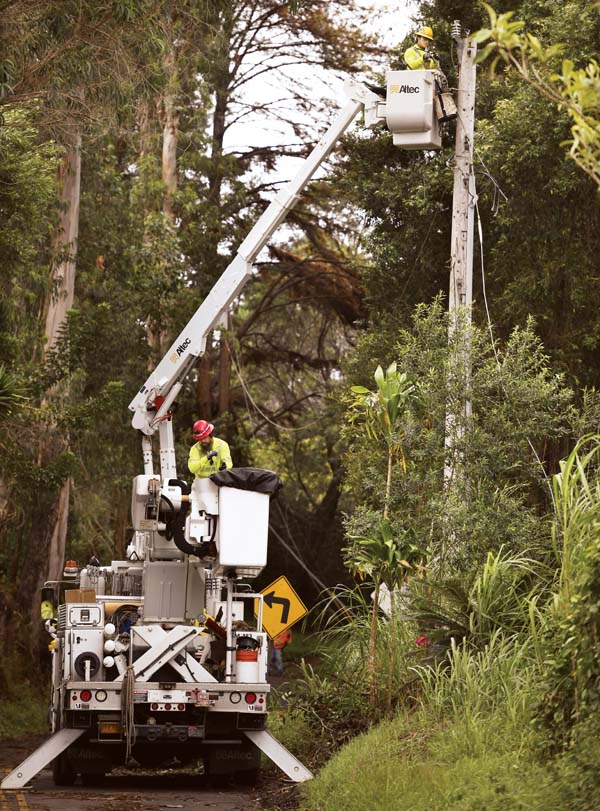 Maui Electric Co. linemen Kyle Sentinella (right) and B.J. Aldosa work with a crew resetting a downed power pole on Piiholo Road Saturday morning in Piiholo. They said high winds from Hurricane Lane toppled a eucalyptus tree that struck the pole. MECO reported its crews were working Saturday to restore power to about 4,000 customers in West Maui and pockets of residents in Upcountry, Haiku and Waihee. The outages were caused by strong winds and downed trees, officials said. -- The Maui News / MATTHEW THAYER photo

On Saturday afternoon, Maui Electric Co. reported it was continuing work to restore power to about 4,000 customers in West Maui and to pockets of residents Upcountry and in Haiku and Waihee.

Additional crews, contractors and resources, including crews from Hawaiian Electric Co., were deployed to restore power as early as midnight today.

“However, due to the extensive damage and nature of the repair work needing to be done, customers should prepare for possible extended overnight outages,” MECO advised.

On Saturday morning in West Maui, crews were able to gain access to areas that had been off limits because of brush fires, officials said. The repair crews were working to replace six severely damaged poles and downed transmission lines that provide power to Lahaina. The repair work is extensive, especially with replacing the half-dozen poles measuring 65 to 75 feet tall, digging out holes to reset them and restringing power lines. After those repairs are done, the main substation can be re-energized, and Lahaina will begin receiving power in phases.

“This method of slow, gradual restoration is important in maintaining the stability of the system and the safe delivery of power,” MECO said. 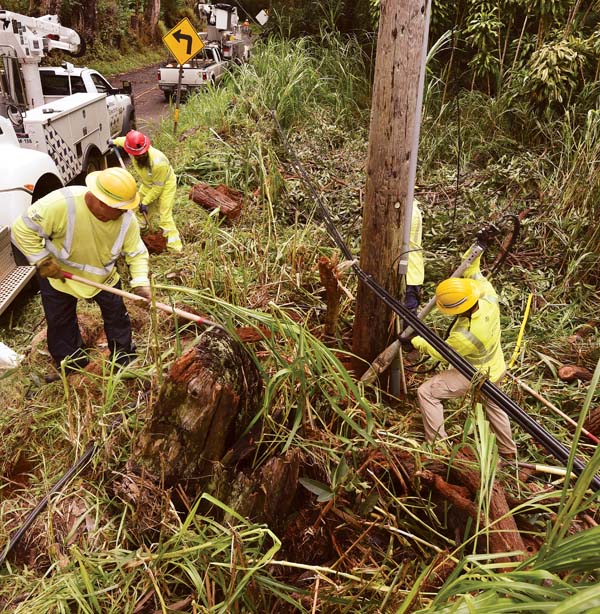 Utility officials hoped to have power restored to customers Upcountry and in Haiku and Waihee by Saturday evening.

Piiholo Road and Lower Keanae Road had downed power or utility lines, and there was a damaged culvert at Nuanualoa in East Maui, said Lynn Araki-Regan, Mayor Alan Arakawa’s chief of staff.

At 7:45 p.m. Friday, police, firefighters and Maui County Public Works and Department of Water Supply personnel responded to an emergency call about a developing sinkhole on Puu Way, a cul-de-sac, according to Araki-Regan. 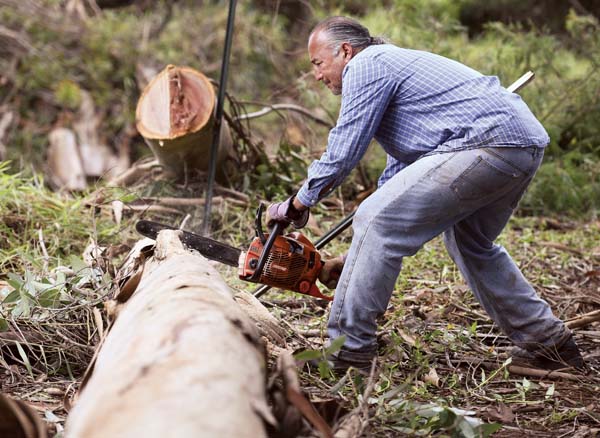 Piiholo Road resident Rudy Salazar sections a eucalyptus tree Saturday on his property. He said the tree toppled by high winds from Hurricane Lane was one of many to cross the road and bring down utility lines in the area. “We’ve lived here three years, and we’ve never seen anything like it,” Salazar said. “With the wind and rain, it was crazy.” He said he and wife Kerina were without power for 26 hours and, with the road blocked above and below them, were stuck at home. “We were trapped.” -- The Maui News / MATTHEW THAYER photo

County Highways Division crews and engineers assessed a collapsed corrugated metal drainpipe at least 4 to 6 feet in diameter, she said. It apparently had failed or collapsed because of flooding and debris upstream. Pieces of the culvert and old wall were in drainage areas of downstream properties, she added, but the debris did not damage homes.

The remnants of the pipe will need to be removed, Araki-Regan said. The culvert collapse impacted water service to the area, and temporary service will be provided today by water department personnel.

County highways personnel removed vegetation from the area, secured it with traffic barricades and made the area accessible to residents, she said. Most residents planned to stay home or made arrangements for accommodations elsewhere.

The Lahaina Aquatics Center sustained storm-related damage, including to a drinking fountain, flagpole and canopies, Araki-Regan said. Also, because of the lack of electricity in Lahaina, the pool pumps remained inoperable. The center’s pools were expected to remain closed while they’re cleaned and chemically treated, she said.

The Lahaina Water Treatment Facility was fully operational on Saturday, but West Maui residents were asked to conserve water while Maui Electric continued work to restore power, she said. Water tankers were located in Lahaina at 829 Kuialua and 849 Niheu streets. 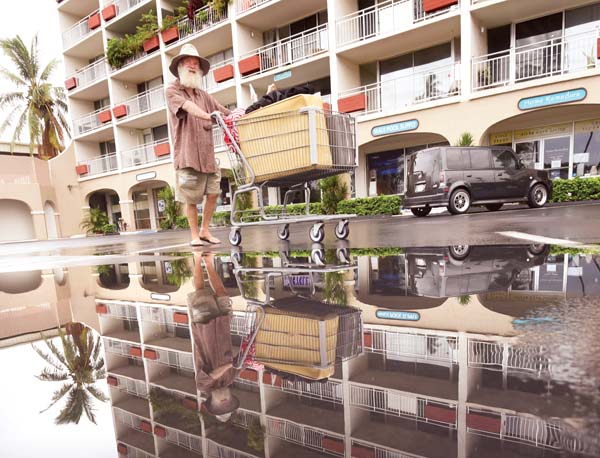 David Crocker, who is homeless, pushes his belongings past a puddle fronting the Island Surf Building on Saturday morning in Kihei. He said he refused to go to a shelter during Hurricane Lane. “I didn’t want to go to a shelter,” he said. “I’m basically a loner. I didn’t have any problems at all. I’m going to a cafe to get a cup of coffee or whatever. I’ve only got a dollar.” -- The Maui News / MATTHEW THAYER photo

The state Department of Transportation reported that crews responded to 10 reports of landslides and fallen trees between Hana Highway’s Mileposts 9.5 and 23.5 on Saturday. And, a bridge a Milepost 17 was topped by 3 feet of floodwater overnight. Damage to the bridge included a parapet wall that was washed away, embankment erosion and some damage to its foundation, officials reported.

The West Maui power outage affected seven traffic signals on Honoapiilani Highway, state officials said. About 20 signs blew off posts on the Lahaina bypass and five other signs were burned, along with portions of guardrails. Also, a landslide blocked southbound lanes a Milepost 4 on Kahekili Highway, officials reported.

In addition, a state Highways Division crew on Molokai was working Saturday to clear debris from fords on Kamehameha V Highway between Mileposts 10 and 27, state officials said.

The Red Cross reported that 219 people sought shelter from the storm and fires in seven evacuation centers in Maui County. 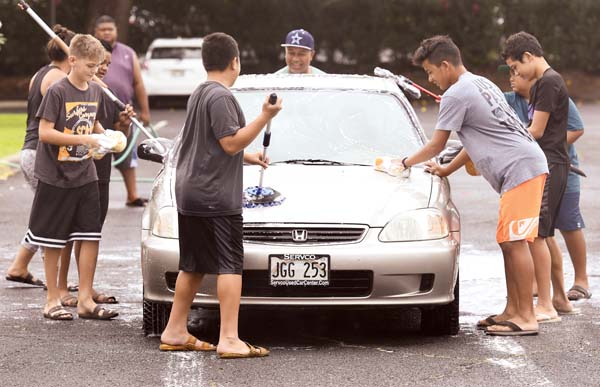 Members of the Kihei Dolphins Pop Warner Unlimited Division team don’t let rainy weather in the wake of Hurricane Lane stop them from holding a fundraising car wash Saturday morning at St. Theresa Church in Kihei. Team officials said the decision to go ahead was made Friday night. Wide receiver Kamaha‘o Au, 12, said customers weren’t worried about getting a car wash on a potentially rainy day. “I think they want to support our team, the Kihei Dolphins, no matter what,” he said. -- The Maui News / MATTHEW THAYER photo

Araki-Regan said that all shelters had shut down as of noon Saturday, except for the Maui High School and Lahaina Civic Center shelters. At that time, there remained 21 evacuees at Maui High and 47 in Lahaina.

National Weather Service rain gauge figures for the 24-hour period ending at 1 p.m. Saturday showed 10.06 inches at West Wailuaiki mauka of Keanae in East Maui, 9.01 inches at Puu Kukui in the West Maui Mountains, 6.11 inches in Haiku, 2.24 inches at Mahinahina, 1.81 inches at Puu Alii on Molokai and 1.71 inches in Kula.

The Big Island appeared to take the brunt of flooding with rainfall totals nearing 4 feet.

Preliminary figures from the weather service show that Lane dropped the fourth-highest amount of rain for a hurricane to hit the United States since 1950. Hurricane Harvey, which devastated Texas a year ago, topped the list.

The Central Pacific gets fewer hurricanes than other regions, with only about four or five named storms a year. Hawaii rarely gets hit. The last major storm to hit was Iniki, which devastated Kauai in 1992. Others have come close in recent years.

* Brian Perry can be reached at bperry@mauinews.com. The Associated Press contributed to this story. 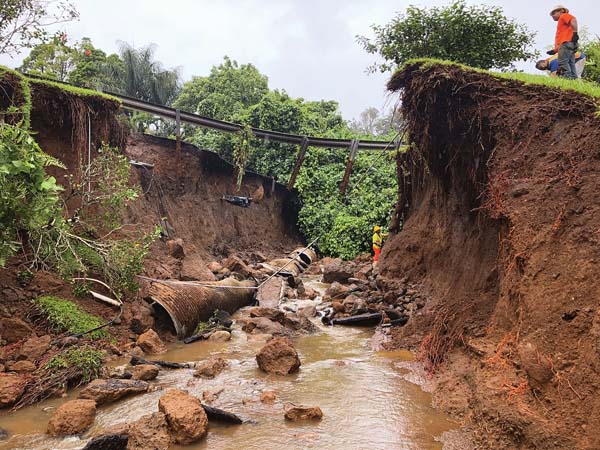 Maui County workers assess damage to a collapsed culvert on Puu Way in Haiku. The damage took out a county waterline. -- County of Maui photo