Flood recovery ongoing ‘off the grid’ in Honokohau Valley

Residents still without water a week after Olivia passed through 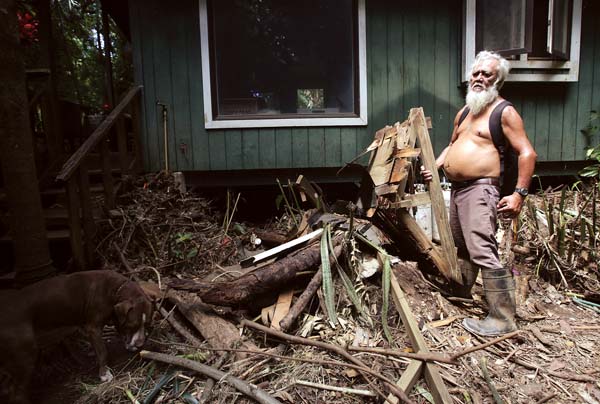 HONOKOHAU VALLEY — Honokohau Valley residents are still without water as they continue to clean their homes and properties a week after surging floodwaters washed away homes, cars and personal belongings.

Support from volunteers, county workers, the Red Cross and others have helped expedite recovery efforts, though, leaving many residents grateful for the support.

“The community is bonding together again,” Honokohau Valley resident Malia Wong said Wednesday afternoon at her home. “In a week, we’ve really come a long way. We’ve done a lot of cleanup. We’ve had an amazing outpouring of community support from people who didn’t even know anyone out here. People came and actually set up a food station and fed everybody.”

Volunteers have helped haul out debris so residents can rebuild homes and other structures, while others have donated supplies. At least two small dwellings were swept up in the flood, along with several cars. 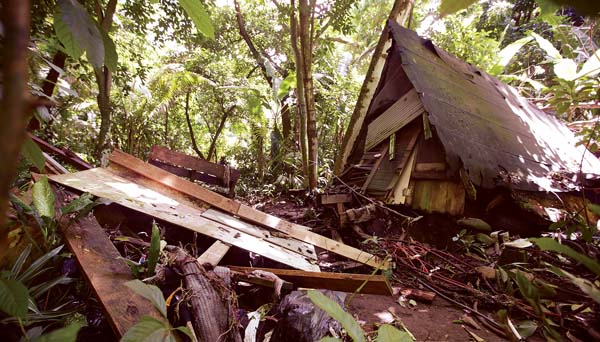 At least two small dwellings and several cars were swept up by the Sept. 12 floodwaters, leaving debris throughout Honokohau Valley.

Most residents are still in their homes, but some are without solar panels, generators and cars — essentials for living off the grid in the valley. Some residents said they cannot afford to replace the items.

Juan Sanches, who lives with his wife further up the valley, needs to walk through debris and vegetation to get to his home after a bridge he built across the river was destroyed. The 62-year-old said it cost him $5,000 to build the bridge, which he used for easier access to his home in the valley.

“People don’t understand our situation up here,” Sanches said. “I have to hike up here every day. I do it at night too with groceries. There’s no way I can cross the river. I’m hurting.”

Sanches said his taro patches and other plants were destroyed along with his waterline and telephone line. He said he does not know where he will find the money or materials to fix everything, especially the telephone line.

“I really need a lifeline,” he said. 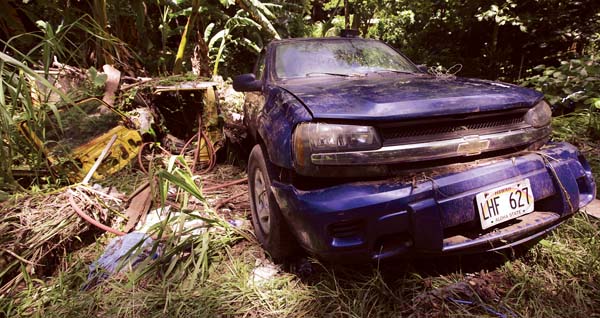 Heavy rains from Tropical Storm Olivia, as it made landfall near Kahakuloa, generated floodwaters in Honokohau Valley that washed away cars and buildings on Sept. 12.

With her house spared, Wong has helped organize aid to heavily impacted residents and received pallets full of baby diapers, clothes, food and water. During the flood, she and her family went house to house checking on neighbors, including one family further up the valley.

“We ran through a house to rescue four babies and one 10-year-old,” she said of one home. “The door was locked, and the parents were outside wading in water chest high holding their dogs. I said, ‘Where are the kids?’ ”

Wong said the family’s home was surrounded by water with their cars washed away and six dogs tied up in the yard. She said the water was quickly rising up to the house built on stilts so she stormed through the front door.

“I was really proud of my kids. When they saw me running in for the babies, they followed me and we scooped them up, took them up to the road and put them in the truck,” she said.

Wong’s husband, Mike Furtado, said they also helped rescue an older lady from her home that was on the other side of the river and cut off from the road. He said a couple also was uncounted for across the river, and it took them two hours to reach their home. 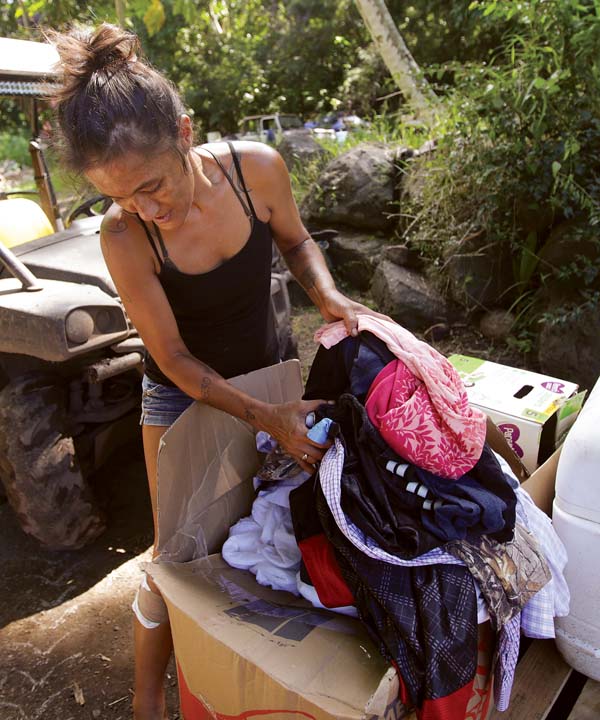 Malia Wong goes through donated clothes and other supplies next to her home in Honokohau Valley.

“When we finally got where we need to be, we found them in bed sleeping,” Furtado said. “Both of their cars had been washed down so that’s why we were wondering where the heck are they. Nobody knew nothing about them, so we were worried.”

Resident Herb Arlen was helping one neighbor tend to her home that had about a foot of water. He said she is staying with him a few houses down as she tries to replace the floor.

“We thought we had it under control, but she said it was like Niagara Falls coming in,” Arlen said. “Nothing’s stopping that, and it just poured right into her house. It could’ve been worse, I guess.”

Arlen said the valley has lost water before during storms, but this outage has taken longer to fix, and it has been “really difficult” for residents. He said the county has setup a portable water tanker on Honoapiilani Highway, but it is hard for some residents to retrieve the water.

Water Supply Department Administrative Officer Jacky Takakura said workers have already repaired the water system and will be taking water quality samples today. She said that, if everything checks out, the department would fill the tank and take samples again.

She added that workers would make sure the portable tanker is full Friday.

Another homeowner, Debbie Sheetz, was cleaning the floors of her future home Wednesday afternoon after floodwaters covered it in mud. She said her home, with framing and exterior up, was possibly going to be completed by the end of the year, but lack of money and damage by the flood have pushed that date into the future.

“This is a nightmare,” she said. “We were going to start hanging drywall last Monday, but that’s been put off with cleanup after cleanup.”

Sheetz also lost her Ford F-150 truck and cellphone in the flood, but she was thankful for all the help and support by county and state workers. She said volunteers also have helped clean up her property, which was covered in debris after the storm.

Furtado said residents may have another large cleanup this weekend and hope to have portable showers and port-a-potties. He said he believes the election year has helped increase aid to the area, but he also believes residents in the valley look out for each other.

“Out here, you have to stick together,” he said. “When we have heavy storms, we get locked in sometimes with boulders on the road. We could be cut off for a week. We live differently than town people live.”

Residents are requesting lumber and other supplies, as well as manpower to assist with cleanup efforts. A Facebook group called Maui Fire, Flood and Disaster relief group has been setup to assist residents.

Malia Wong goes through donated clothes and other supplies next to her home in Honokohau Valley.

At least two small dwellings and several cars were swept up by the Sept. 12 floodwaters, leaving debris throughout Honokohau Valley.

Heavy rains from Tropical Storm Olivia, as it made landfall near Kahakuloa, generated floodwaters in Honokohau Valley that washed away cars and buildings on Sept. 12.

Marcus Mariota did not play in the Titans’ win over Houston on Sunday due to an elbow injury. AP photo

Jerico San Agustin of Kiffmann Taekwondo (left) stands on the podium next to winner Omar Salim of California after receiving his silver medal at the Canada Open on Saturday. KIFFMANN TAEKWONDO photo

Shayla Hoeft is hitting .394 — highest on the Portland women’s volleyball team among the regulars — is second on the team in kills and total points and third in blocking. The Pilots are off to the best start in school history at 12-0. UNIVERSITY OF PORTLAND photos