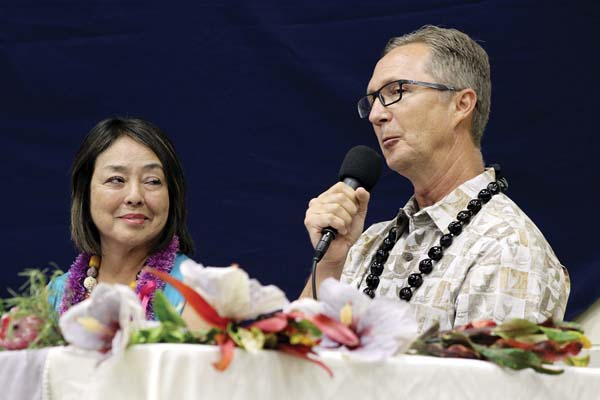 KULA — Upcountry candidates took on issues of water and who should pay for improvements to install meters during a forum in their home district Wednesday night.

More than 100 people came to the Kula Community Association event to hear from the two mayoral and all 18 council candidates in a wide-ranging forum that touched on issues of agriculture, council attendance, open land and housing.

The night ended with the Upcountry race between Council Member Yuki Lei Sugimura and challenger Hannibal Starbuck, who discussed the problem of Upcountry residents who are eligible for water meters but cannot afford the multimillion-dollar improvements needed to install them.

Association President Gina Flammer asked whether it was the county’s responsibility to pay or whether residents should be pooled together.

Sugimura said the council Policy, Economic Development and Agriculture Committee, which she chairs, will be considering the idea of a community facilities district policy, which is similar to a special improvement district in that it will “help communities pool together to do things like this.”

“The law is that the county or the water department will bring your water meter to your property, but it is your responsibility to take it up to your house,” Sugimura said. “If you look at fairness, what is happening is places like Kahului, where you have a development that comes up with many homes close to each other, the water department does exactly that. They take the water there, and the resident or the developer is responsible to take it up to the home.”

However, Sugimura acknowledged that there are challenges with larger, more spaced out properties in Kula. She said she wanted to see if there were ways Upcountry neighbors could work together to put in water systems without overstepping the rules of fairness that require people to be served in the order of the water meter list.

Starbuck said that he thought “the idea of the neighborhood getting together is the best one that I’ve heard, and I would look at the list, like I said, holistically.”

“When the first person of that district comes up and they’re told they have to pay $1.7 million to run the pipe there, and all the people after that are going to benefit from it, get them all together at that time . . . and say, ‘Are you ready to be a part of this now? Then you can buy in,’ ” Starbuck said. “And if you’re not, then you might miss your chance later on.”

Starbuck added that residents have to install pipes of a certain size to accommodate fire hydrants, but said that if firetrucks can’t even access those properties, the residents should be able to get variances.

“Not that I have all the solutions, but I don’t think the current system is working,” Starbuck said.

Problems with council attendance were a frequent topic, as moderators pointed out that some committees have struggled to maintain quorum.

Council Member Riki Hokama, who holds the Lanai residency seat, suggested adjusting committee sizes and said sometimes members have to weigh attending a committee meeting versus other meetings or duties.

“When I go and take time off from my work to come and testify and they can’t make quorum, that’s humbug. I don’t think that’s right,” he said. “As a working guy, I don’t know any other job where you just don’t show up and there’s no repercussions.”

Council Member Kelly King, who holds the South Maui seat, pointed out that governor-appointed boards and commissions have rules stating that if members miss five or more meetings without an excuse, they’re removed.

“We should do that with the council,” said King, who chairs the Planning Committee. “We should give the committee chair the authority to change out members if we have ones that repeatedly don’t show up, and especially if they don’t show up or if they are absent without a good excuse.”

Challenger Zandra Amaral Crouse pledged to “show up for every meeting that my name is on.” She said she has attended many meetings as a testifier where there hasn’t been quorum.

“As a businesswoman, it takes out of my busy schedule to go there so that I can serve my community better as a civilian,” she said. “I think if I can make that sacrifice, I think those that sit on the committee should make the same sacrifice as our elected officials. I do, however, know that circumstances sometimes come up.”

During the Wailuku-Waihee-Waikapu panel, moderators asked incumbent Council Member Alika Atay and challenger Alice Lee what they thought of large agribusinesses on Maui. Atay, who comes from a natural farming and organic food production background, pointed to the example of Korea’s large-scale natural farms.

“I believe that can be done, and there is a place for that kind of entity and operations here on Maui,” he said. “There is a place. However, we also need to look at the holistic approach of where and what kinds of agriculture, because we live on an island, so we need to be remediating our soil, regenerating our soil health and also planting more trees so that we also increase our watershed.”

Lee said the issue with water would be figuring out “how we can allocate what the farmers need, what our Native Hawaiians need and what our domestic needs are.” Finding workers is another challenge.

“Because we have a pretty robust economy right now, it’s very difficult to find employees for farming, especially since they don’t pay that well,” she said. “If the county is serious about farming, we really have to create incentives and probably subsidies to help our farmers because they need to get the right start. We need to help them create markets.”

East Maui candidates Claire Kamalu Carroll and Shane Sinenci also expressed support for agriculture, coming from an area that moderators pointed out used to be more populated and rich with kalo patches. Sinenci agreed that there has been “an exodus of people moving out to Central Maui” for jobs. He said he’d like to support food production centers in each community that promote farm to table.

“We definitely need to preserve our agricultural lands for two reasons: just in case our shipping from the Mainland ceases for some reason, and also in anticipation of population growth,” Sinenci said.

Carroll pointed to the “exceeding” deer population as a problem for farmers. She said that agriculture needs to be a top priority.

“It’s about supporting our present farmers so they can be thriving to success to hopefully expand,” Carroll said. “Maui Cattle Co. leased about 4,000 acres to expand their agricultural field, and that’s the kind of things we need to look at, is actually being proactive in our agriculture.”

The Paia-Haiku-Makawao district has plenty of open space, including former plantation lands and properties purchased by the county. Moderators wondered what would be the best use for those lands.

Candidate Trinette Furtado said that people enjoy the district’s country ambiance and believed “we can have a cohesive mix of agriculture and housing.”

“I believe if we look at, for instance, a current proposal of agricultural cluster lots where we can still have agriculture, whether it’s growing food, whether it’s growing something we can use industrially, but also include housing in that area,” she said. “Because what we have to look at is that housing and the need for housing is never going to go away.”

Candidate Mike Molina said he favored preserving the district’s open space and view corridors but that the county also needs to provide housing for seniors and young families.

“That, I believe, is a good use of our lands in this area,” he said. “I certainly wouldn’t want Upcountry to proliferate into a humongous amount of houses like we would see in Central Maui. So I think we need to find that balance, work with the community, stakeholders. And the key is planning, make sure our community plans are followed.”

Mayor Alan Arakawa, who’s running for the Kahului residency seat, said that while the county owns plenty of land in Central Maui, only certain areas close to infrastructure are suitable for building. He said the county needs to do an analysis “piece by piece” on what’s appropriate for various parcels.

“Those that are not appropriate, most of the time we leave it in open space,” he said. “Take for instance all the property over in Launiupoko or Ukumehame. To be able to build there would take considerable challenges because there’s no sewer and water, and there’s no infrastructure to speak of that would support housing there.”

Kahului candidate Natalie “Tasha” Kama suggested looking into private partnerships for open Hawaiian home lands. She pointed to the example of Kapolei, where the state leased land to a shopping center that will generate funds to build homes for Hawaiian homesteaders.

“Hawaiian home lands is trust lands,” Kama said. “You can lease it. They’ve been doing it for $1 all over the state. And if they could do that with the Kapolei lands . . . I think we could do something similar to that. And the fact is that there’s no blood quantum when you go into a partnership with the Department of Hawaiian Home Lands and the county and private partnerships like that.”

“Today, the neighborhood is gone, there are gates, and you can no longer go by,” Crivello said of the east end where she raised her children. “Our neighbors do not know their neighbors in the east side, and east side residents are saying zero cap — no more.”

However, the former resort-area west side is more open to a limited number of rentals, Crivello said.

Challenger Keani Rawlins-Fernandez said she supports a zero-rental cap because many in the community do. She said the owners of the short-term rentals on Molokai don’t live there, so “it’s not really benefiting our residents.” (A real property tax records search of all 19 permitted short-term rentals on the island showed that all but one were registered to off-island mailing addresses.)

“The density of vacation rentals in one neighborhood alone is transforming our neighborhoods into something that our residents don’t recognize,” Rawlins-Fernandez said.

However, she supported bed and breakfasts, because owners live on property and can enforce the rules.

“I’m definitely not opposed to having lifeguards at Pu’u Keka’a,” said Paltin, a county lifeguard. “I think they’re drastically needed. The issue that I see is if the county continually pays for the state responsibilities, then we will not be able to pay for the responsibilities that belong to the county.”

She suggested a public-private partnership with the state and hotels contributing funds, with the county overseeing.

Paltin then asked Nava what he would do about his business and duties in the Philippines if elected. Nava, who has been working with the Rotary Club of Lahaina to fund clean water systems in the Philippines, said he visits twice a year to make sure donations are being used properly. He said he would still show up for council meetings.

“Maui County will definitely be my sole priority,” he said. “As far as my business is concerned, I am fortunate enough that I believe in training my employees to a point that I could leave my company and I know it will run smoothly.”