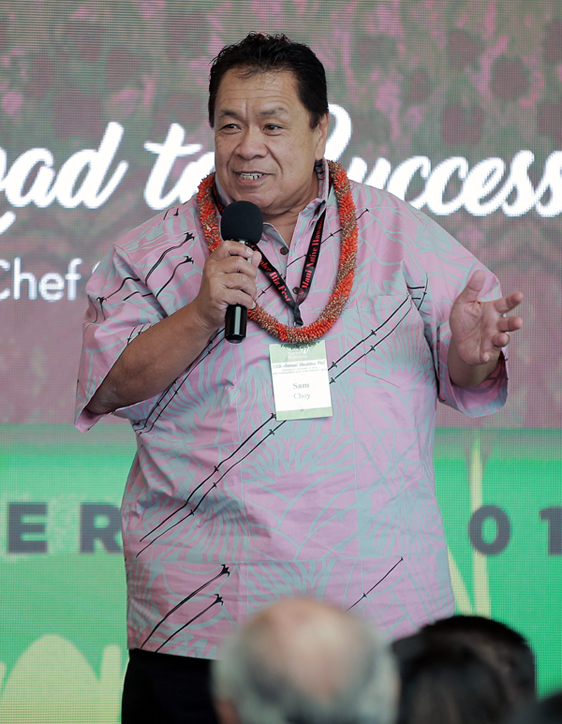 WAIKAPU – Celebrity Hawaiian chef Sam Choy said he continues to cook the same way he first learned in his parent’s house and encouraged other Native Hawaiians to “live our lifestyle” and to “follow our dreams and just be Hawaiians.”

“I’ve never changed my style,” Choy said during Wednesday’s Hui Holomua Business Fest at King Kamehameha Golf Club. “People adapted to my food and that’s what we have to do. We have to live our lifestyle like we were brought up in.”

The chef from Kona shared his whirlwind journey through the culinary world with about 270 people during the event hosted by the Maui Native Hawaiian Chamber of Commerce. Choy also provided some updates on his current work and how he confronted the owner of the Chicago-based company that trademarked the name “Aloha Poke.”

Choy recently returned to Hawaii after opening his first California eatery, Poke to the Max, last week and plans to follow with a fleet of food trucks. He already has two restaurants and three food trucks in Washington state in addition to his eateries in Hawaii.

The popular chef told the audience that his favorite dish to make is poke because it is a dish “truly from the islands” and segued into the controversy surrounding the Aloha Poke chain. It is facing blistering criticism on social media by Hawaii residents who called for a boycott after the store sent cease-and-desist letters to local and Mainland businesses with similar names several months ago.

“The guy who stole the name ‘poke’ is not only rethinking it, but he knows he’s in deep kaka,” Choy said. “I went to Chicago and see the guy and you know the funny part was? He had all my poke books in there.

“I told him, ‘This is not where you’re getting all your recipes right?’ He said, ‘Well, we have the foundation made out of your book.’ I said, ‘I like that but you guys cannot do what you guys did.’ ”

Choy said the owner told him that his lawyers advised that they could open up multiple restaurants and market the name, but they needed to own the name first.

“I told him you cannot own the name,” Choy said. “We cannot let you guys do that. If you going to own the name you’re going to be in deep trouble. I think they’re in the process right now to change the whole thing.”

During his 45-minute talk, Choy encouraged the crowd to support Hawaiian culture in cooking and farming. He also offered advice to farmers on preparing produce for market and how to market their business.

“People don’t buy dirt,” he said. “Gotta be clean when you sell your produce.”

High electric bills, high land taxes and other issues have caused farmers to “give up,” which has limited the amount of local food available for residents and restaurants, Choy said. He said he does not want to see development replacing agriculture and encouraged the crowd to speak to political leaders.

“I think we are our worst enemy,” he said. “We have the idea, we have the vision, we have the dream, but we can’t get the team together to support the farmers.”

Choy recalled speaking with iconic Hawaiian singer Israel Kamakawiwo’ole two months before he died. He said the singer told him that he regretted moving toward Jawaiian music and wished he had stuck to only Hawaiian.

In that light, Choy told the audience to not “change our lifestyle and try to be something else.” He said other states admire Hawaii, including its food and identity.

“It starts right here in your heart,” he said. “I always tell people as an artist envisioning a painting, it starts with seeing it through the eyes, through the heart, through the hands, and food is the same thing.

“My dad, when I was very young, always told me never cook when you’re mad. So lately my wife goes, ‘You’re not cooking tonight?’ ‘Oh no I mad.’ ”

Choy plans to return to Maui next year to cook in some homes for his television show, “Sam Choy’s in the Kitchen,” on KHON2. He did not rule out a permanent presence to the Valley Isle in the form of a restaurant, but he had no immediate plans.

Both restaurants closed in the early 2000s.

In 2013, Choy had been looking to open up a new restaurant at the old Longboards Ka’anapali at the Marriott’s Maui Ocean Club. The restaurant would have been similar to his flagship location in Kailua-Kona, but instead became Kaanapali Grille.

Choy said he had to “shift gears” after the restaurants did not work out but would be happy to return to the island.

“I’ve kind of just focused on the Mainland, because it’s such a great opportunity but definitely somewhere and sometime down the line I’d like to come back to Maui and open up,” he said.

“That would be a great idea.”