Tourism on Maui appears to have weathered storms 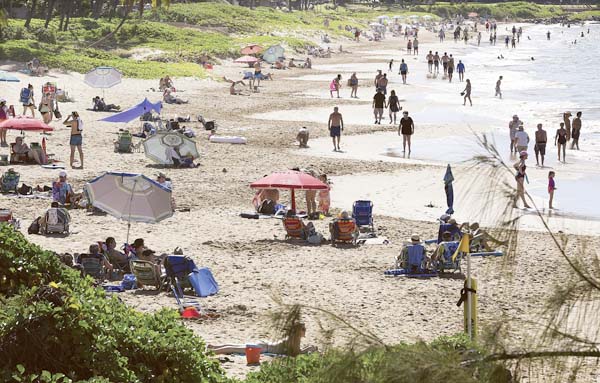 Tourism officials appeared to downplay the impacts of storms Lane and Olivia that arrived weeks apart in August and September following the release of October tourism data last week.

When asked about whether the storms tempered tourism, Sherry Duong, Maui Visitors and Convention Bureau executive director, replied Friday that based on the October data, “Maui realized growth in both visitor spending at 1.8 percent and visitor arrivals at 2.4 percent compared to that of last year.”

Hurricane Lane veered away as it neared the islands, but tropical storm force winds whipped up a brush fire Aug. 24 that burned 1,500 acres in West Maui a few miles from the Kaanapali resort and damaged or destroyed more than 20 structures.

Tropical Storm Olivia rolled through the West Maui Mountains on Sept. 12 causing flooding that washed away homes and flooded and damaged roads and caused power outages.

Both storms received attention from the national media.

“Arrivals were not down on Maui for August and September,” said Jennifer Chun, director of tourism research for the Hawai’i Tourism Authority on Friday. “Per-person per-day spending was down in those months, so overall visitor spending for Maui was down in August and flat in September.”

Visitor spending was back up in October for Maui, rising 1.8 percent to $377 million with daily spending nearly the same as last October at $219 a day, Hawai’i Tourism Authority data released Thursday showed.

The average number of visitors on Maui daily increased 2.2 percent to 55,608 in October.

For the first 10 months of the year, visitor spending on Maui was up 10.9 percent to $4.26 billion and visitor arrivals were up 7.2 percent to 2,433,648 visitors — both on track to top last year’s record-breaking totals.

“It’s been well reported that 2018 is going to end up being another banner year for tourism on Maui, and the credit needs to be given to our Maui partners who continue to deliver on our visitor promise as a world-class vacation destination unlike any other in the world,” said Duong.

Looking ahead to 2019, she said “Maui is on track for another strong year with continued growth in spending and arrivals aided by increased seats and direct airlift.”

The growth in air seats to Maui — an estimated 12.6 percent this year — is helping fuel the “strong travel demand for Maui,” Duong said. There has been increased service from Denver, Chicago, Los Angeles and San Francisco and additional daily service from Portland, Ore., and San Diego.

“With the increase in air services, Maui is an accessible destination getaway for our visitors to enjoy,” she said. “In addition, travelers visiting Maui have the option to make an easy hop-over to Molokai and Lanai, Maui’s sister islands, which both offer their own distinctive and unique experiences to further enhance the visitor’s experience while vacationing on Maui.”

Other interesting tidbits in October’s report:

• The number of visitors to Maui only was up 6.6 percent in October and 9.7 percent for the first 10 months.

Although Maui’s top economic driver appeared to weather the two storms and maintain its positive outlook, Duong warned that “tourism is a fragile industry that can be impacted by events outside of our control.”

“Therefore, we must continue to remain focused on executing effective marketing programs to keep Maui Nui top of mind and competitive with other global destinations.” she said.