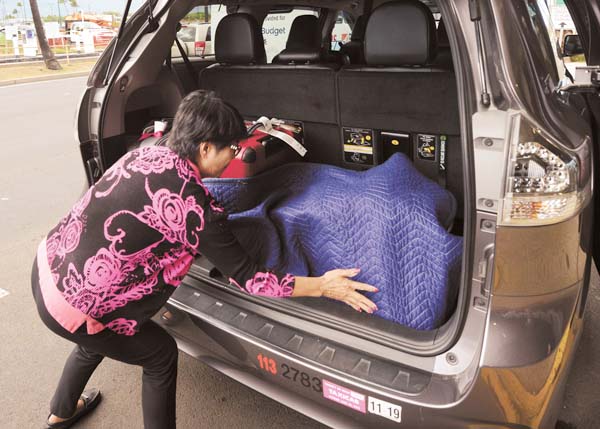 Veteran taxi driver Linda Pagaduan makes sure her passengers’ bags are “perfect” before setting off from Kahului Airport on Jan 15. The Maui News / MATTHEW THAYER photo

The state Department of Transportation announced Thursday that transportation network companies, or ride-sharing services such as Uber and Lyft, will be eligible to legally pick up customers at Kahului and Kapalua airports starting Feb. 1 at designated locations.

Previously, ride-sharing companies only were allowed to drop off customers at the two Maui airports.

Lyft and Uber said Thursday that they plan to begin taking advantage of the decision Feb. 1. The rule change will allow ride-sharing companies to pick up passengers between baggage claim and the car rental counters at Kahului Airport and in front of the operations and maintenance office at Kapalua Airport.

Maui airport taxi drivers responded Thursday with frustration over the state’s move and what they say is a lack of oversight of companies that effectively operate as taxis.

“These transportation network companies claim that they’re different because of an app,” said Pukalani resident Nick Crowley of Maui Island Taxi. “They describe it as having to do with the internet. So basically, if someone texts me for a ride, emails me, or drops me a pin, this is somehow different. . . . They’re a giant, part-time, unregulated taxi company taking jobs away from us.”

Local cab drivers say they should be called “ride-sharing companies,” too.

“A bus is a ride-share; a shuttle is a ride-share; strangers share cabs,” Crowley said. “Why does Lyft and Uber get to be called ride-sharing companies, and they have different rules from the rest of us?”

He also said that Roberts Hawaii Airport Shuttle and SpeediShuttle will be severely impacted by the changes, as well.

The announcement comes in the wake of a taxi demonstration at Kahului Airport on Jan. 11, where scores of local cab drivers protested against what they said were illegal operations by Uber and Lyft. They said an estimated 130 airport taxis were being impacted by Lyft and Uber pickups at Kahului Airport.

Amended administrative rules went into effect last August that allowed ride-sharing companies to apply for state Transportation Department permits. This was the first time rules for commercial services at airports have been amended since 2002, before ride-sharing companies existed, DOT spokesman Tim Sakahara said in a news release Thursday.

Uber and Lyft began operating at Daniel K. Inouye International Airport on Oahu on a trial basis Dec. 1, 2017, and on a permanent basis starting Aug. 24. Maui District Airports Manager Marvin Moniz said last week that Lyft and Uber both applied for DOT permits to pick up at Kahului Airport within the last month.

“I just want to throw my hands up,” said Lahaina resident Bart Mulvihill, general manager and managing partner of Christopher Luxury Sedan Service and Limousine. “These (Uber and Lyft) drivers have no training, no supervision, no local contact. You get in an accident, who are you going to talk with?”

Mulvihill said that he and his drivers must pass and complete rigorous county and state requirements for taxi drivers, such as written tests, fingerprinting and personal information paperwork, and pay fees. That way, taxi drivers can be “narrowed down in a hurry if anything goes wrong,” he said.

He added that his workers go through Department of Homeland Security background checks that permit them to walk through the airport. “My guys are checked out hard. Any felony record, no way,” Mulvihill said.

Crowley said that many local cab drivers are struggling to pay their mortgage and rent due to the high cost of living. He said it’s hard to “even put into words how this feels.”

“It’s like if someone walks up to your desk at the newspaper and sits down,” he said. “You say, ‘Hey what’s going on? You need to move.’ And they’re like, ‘No, I’m going to sit here because I’m charging half of what you charge. But I’m also going to work part time because I don’t care as much about the job.’ . . .

“The transportation network companies have been well-received by the public at HNL (Honolulu international airport), and we are pleased to offer the option to Neighbor Island travelers,” said Deputy Director Ross Higashi of the Airports Division on Thursday.

Designated ride-share pickup locations for airports in Kahului and Kapalua, along with Lihue, Kona and Hilo, were released Thursday.

Ride-share companies must meet specific state insurance requirements, pay fees and satisfy other legal requirements prior to being issued a permit to operate at the airports, Sakahara said.

Uber spokesman Nathan Hambley said: “We’re thankful to the riders, drivers and community members who expressed support for this change.”